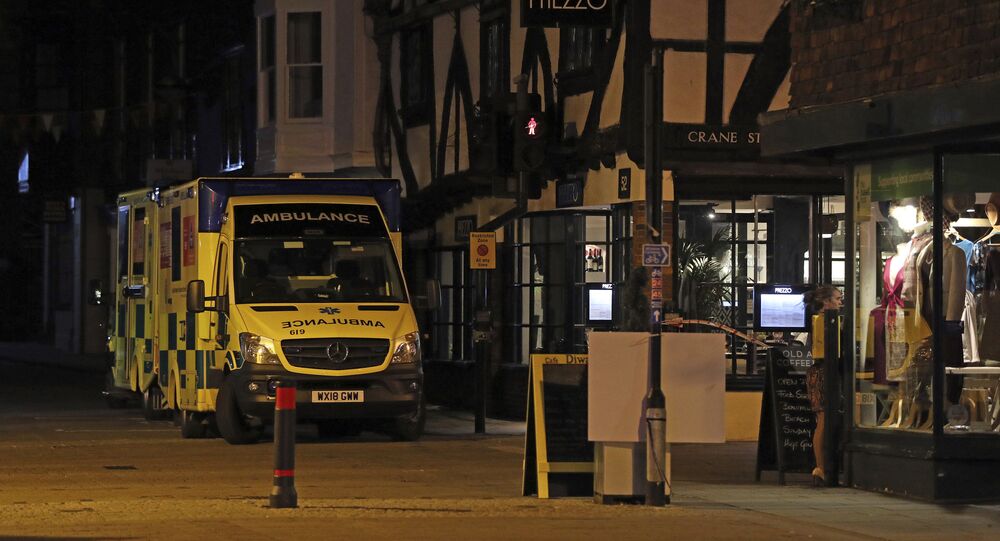 Twitter Ridicules Reports of 'Russians' Being Poisoned in Salisbury Restaurant

On Sunday evening, a number of British media reported that the police had cordoned off an Italian restaurant in the city of Salisbury following a “medical incident” with two guests falling ill.

The Italian restaurant Prezzo in Salisbury was put on lockdown after a couple fell ill, with one witness claiming that they were Russian, but that hasn’t been confirmed so far.

The UK police initially suggested that the couple’s symptoms were “consistent with Novichok poisoning,” but once experts determined that it was not a nerve agent, officers gave the all-clear. The cordon, however, remained in place at the restaurant.

"Earlier this evening, Wiltshire Police and partners declared a major incident following a report that two people had fallen ill in Salisbury. Police received a call from the ambulance service to Prezzo restaurant, on High Street… Two people, a man aged in his 40s and a woman aged in her 30s, had become unwell," the police said in a statement.

Other witnesses to the incident claimed that the woman was “hysterical” after finding the man collapsed in the restroom.

“The blonde appeared to be at the table on her own and kept going away, getting up and coming back again. When she came back she was hysterical. She called paramedics and the next thing an ambulance turns up and they come rushing in. The ill man was found in the toilet after having a fit and they came back in, all gowned up with all the white and the masks on,” the BBC cited one of the witnesses as saying.

Reacting to the reports about a Russian citizen fallen ill in Salisbury, the Russian Embassy in the UK stated that it has not yet received the police's confirmation.

"The Embassy immediately contacted both the law enforcement authorities in London and the Wiltshire County police to confirm information about the alleged presence of Russians among the victims. There is no official confirmation from the police yet."

The incident sparked panic in Salisbury, where former GRU colonel Sergei Skripal and his daughter Yulia collapsed after dining at the restaurant Zizzi and allegedly being exposed to Novichok six months ago, but social media users simply couldn’t take the Prezzo drama seriously.

Many ridiculed the reports of a Russian couple being poisoned in Salisbury, with some suggesting that the UK government may be trying to distract public attention from Brexit…

Porton Down have issued a report stating that due to the molecular structure of Novichok it always attacks people in pairs. Curiously GRU operatives are immune.

It's been almost 4 months since the last one. How many Nina Ricci "Novichok edition" did the "GRU 2" drop around there??

Oh here we go again.. Lets Blame the Russians for a bad curry

Never fear…..Detective Chief Inspector Theresa May is on the case pic.twitter.com/ZQY9wmZTgr

And they actually think we believe their nonsense! pic.twitter.com/4hsyS2K7BT

It’s a big BREXIT week for the union — a distraction for Theresa is needed. Oh another Russian couple have become ill in another Italian Restaurant in Salisbury — not far from the Porton Down chemical weapons lab.

…while others alluded to the recent interview by the two suspects in the Skripal poisoning, Alexander Petrov and Ruslan Boshirov, who told Sputnik and RT Editor-in-Chief Margarita Simonyan that they had visited Salisbury as tourists to see the cathedral, contending it was famous, not “just all over Europe, it’s famous all over the world” for its 123-meter spire:

Some turned to somewhat dark jokes, poking fun at the police’s initial suggestion that the “Russian” couple might have been exposed to Novichok:

Who ordered the side order of novichok

Looks like the Chef from Zizzi got a new job.

Over the weekend, a well-known website for travelers, TripAdvisor, announced that it had shut down the comment section for the Salisbury Cathedral following an influx of mock reviews. This came shortly after Alexander Petrov and Ruslan Boshirov, suspected by the UK of the poisoning of the Skripals, claimed in an interview that they had come to Salisbury to visit the “famous Salisbury Cathedral.”

© Sputnik / Maksim Blinov
Skripal Poisoning 'Suspects' Have Nothing to Do With Putin - Kremlin
Last week, UK authorities charged the duo with carrying out a failed nerve agent attack on the Skripal family, while the police released their images and claimed that Boshirov and Petrov were Russian military intelligence officers – which the suspects later denied in their interview.

On March 4, Sergei and Yulia Skripal were found collapsed near a shopping mall in Salisbury after allegedly being poisoned with what London claimed was Novichok nerve agent. London rushed to accuse Moscow of attempted murder, while Russia has repeatedly dismissed the allegations as “absurd.”