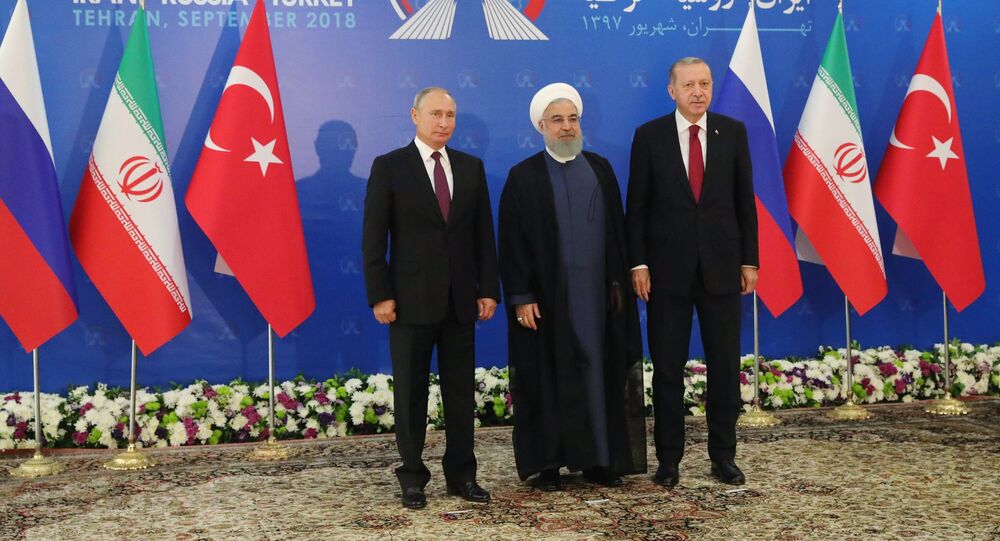 According to the Russian President Vladimir Putin, the priority now is to remove terrorists from Syria's Idlib. At the same time, the Russian president noted that there was a lot of opportunity for peacemaking with those in Idlib, who was ready for a dialogue.

The Russian president further noted that there is a large number of civilians in the Syrian Idlib and this must be borne in mind when fighting terrorists.

"There is a large number of civilians in the Idlib zone, and we certainly need to bear this in mind [when fighting terrorists]," Putin said at the Russia-Iran-Turkey summit.

Speaking further, Putin said that conditions for accommodation of up to one million refugees were created in Syria, the authorities gave guarantees of their non-discrimination.

"Conditions have been created in Syria to accommodate up to a million refugees. The government gives firm guarantees of security and non-discrimination to all returning citizens, including property issues," Putin said.

© REUTERS / Alaa Al-Faqir
Israel Evacuated Islamist Commanders From Syria Alongside White Helmets
Putin says he agrees with his Iranian and Turkish counterparts that the three countries should boost the trilateral coordination on the humanitarian issues in Syria.

Turkish President Recep Tayyip Erdogan, in his turn, said that the trilateral Russia-Turkey-Iran summit on Syria in Tehran is the last opportunity for a peaceful settlement of the situation in the Syrian Idlib.

"Our goal is to peacefully solve the Idlib issue in accordance with the spirit of the agreements in Astana, this is the last opportunity to prove their reputation," Erdogan said at the summit.

Speaking further, the Turkish president noted that the preservation of Idlib's status as a de-escalation zone was vitally important.

"Attacks on Idlib by the Syrian regime worsen the situation in the region. These attacks pose risks to the political settlement in Syria. It is vitally important to preserve Idlib's status as a de-escalation zone. Any wrong steps in this direction will be felt everywhere. The problem should be resolved in the spirit of Astana," Erdogan said.

At the same time, Iranian President Hassan Rouhani said that cooperation between Russia, Iran and Turkey in Syria should continue until the complete defeat of terrorism and establishment of peace in this country.

"Our cooperation must continue until the end, until terrorists are eliminated, until democracy is established in Syria, until the refugees return, until the peace is established," Rouhani said after the trilateral summit.

© Sputnik / Mikhail Klimentyev
Putin: Terrorists in Syria's Idlib Preparing Provocations, Including With Chemical Weapons
The situation in Syria's northwestern Idlib province, the last major insurgency stronghold, has become one of the key topics at the summit. According to the Kremlin, the terrorism hotbed in Idlib destabilizes the situation in Syria and undermines the work toward the political settlement of the conflict.

Moreover, Russian officials have repeatedly warned that terrorists were planning a false-flag chemical weapons attack in Idlib with an aim to provoke Western retaliation against the Syrian government.

US Representative for Syria Says Possible Idlib Offensive Would Be 'Reckless'