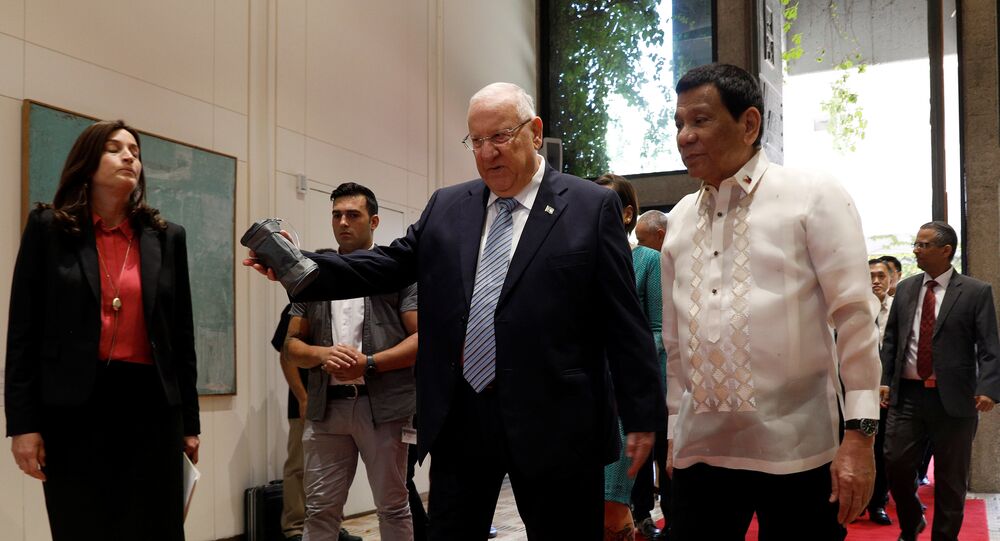 Rodrigo Duterte apologized for his references to Hitler made during his 2016 drug crackdown, which claimed the lives of thousands.

"Hitler was actually representing the devil himself. He was the devil on earth," Rivlin said.

Referring to Duterte’s trip to the Yad Vashem Holocaust memorial on Monday, Rivlin also expressed hope that the experience would help the former understand why references to Hitler are so sensitive.

"Probably you have realized yesterday the feelings when you have visited the museum of Yad Vashem in Jerusalem, to really feel the atmosphere, to feel the feelings of all the people that were part of this disaster," he said.

© AP Photo / Bullit Marquez
Philippines' Duterte Touts Israel as 'the Only Country' to Buy Arms From
Rivlin’s statements were apparently evoked by remarks made by Duterte in 2016 when he claimed that he would be “happy” to slaughter millions of drug addicts in Philippines.

"Hitler massacred three million Jews. Now there are three million drug addicts [in the Philippines]. I'd be happy to slaughter them," Duterte said, though he later apologized for this remark and insisted that his comments were aimed at critics who likened him to Hitler.

Rodrigo Duterte started his four-day official visit to Israel on September 2, becoming the first Philippine head of state to visit the country since the establishment of relations between Tel Aviv and Manila in 1957.

During the visit, Duterte signed a series of agreements on trade, science and caregiving with his Israeli counterpart, Prime Minister Benjamin Netanyahu; Duterte’s arrival to the country, however, was marred by protests as dozens of demonstrators expressed their outrage at the Philippine president’s policies.