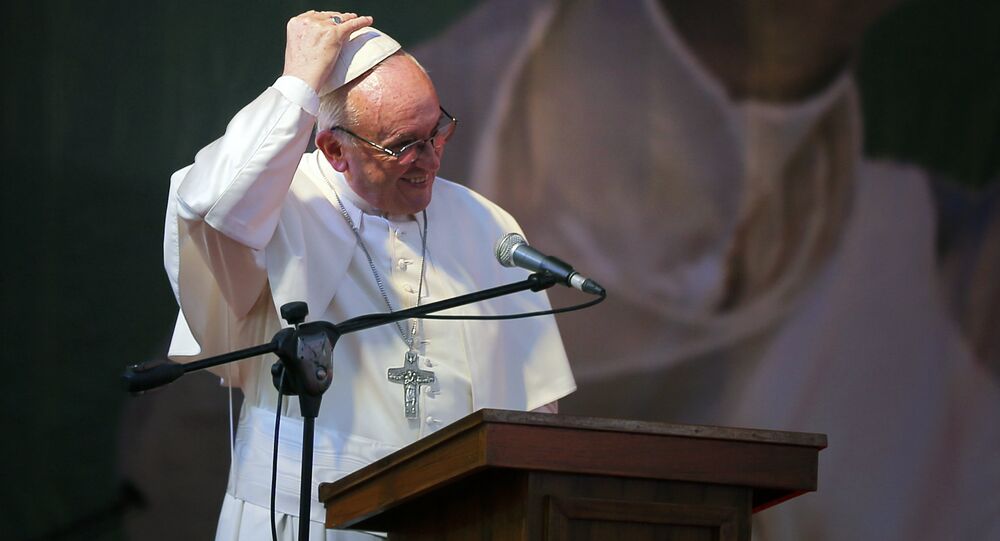 VATICAN (Sputnik) - Pope Francis has expressed his concern about the risks of a possible humanitarian catastrophe in the Syrian province of Idlib amid reports of a potential government offensive and urged the international community and the warring parties to engage in a dialogue for the sake of civilian lives.

"The winds of war are still blowing and the unsettling news about the risk of a possible humanitarian catastrophe in the province of Idlib are coming. I urge once again all the international community and all the parties involved to make use of the instruments of diplomacy, dialogue and negotiations, in compliance with the international humanitarian law and to safeguard the lives of civilians," the Pope said at the Angelus.

The situation in Idlib has escalated over the past week amid the recent reports of a potential government offensive after Russia said it had evidence that terrorists in Idlib were preparing a false-flag chemical weapons attack to frame the government forces and spark a US-led military intervention.

© Sputnik / Michail Voskresenskiy
Idlib Militants Dig Huge Tunnel Network, Plan Chem Weapons Provocations – Source
The Idlib province is one of Syria's de-escalation zones and a remaining stronghold of terrorist insurgency in the country. Under ceasefire agreement, brokered between Syrian government troops and armed opposition, military activities are prohibited in the area, but the ceasefire guarantors, which include Russia, Turkey and Iran, repeatedly record truce violations.

Syrian foreign minister Walid Muallem said on August 30 that government forces would "go all the way" in Idlib and that Damascus's main targets were terrorists.

Russian Foreign Minister Sergei Lavrov said earlier in the week that talks were underway to create humanitarian corridors in Idlib to allow civilians leave the province.