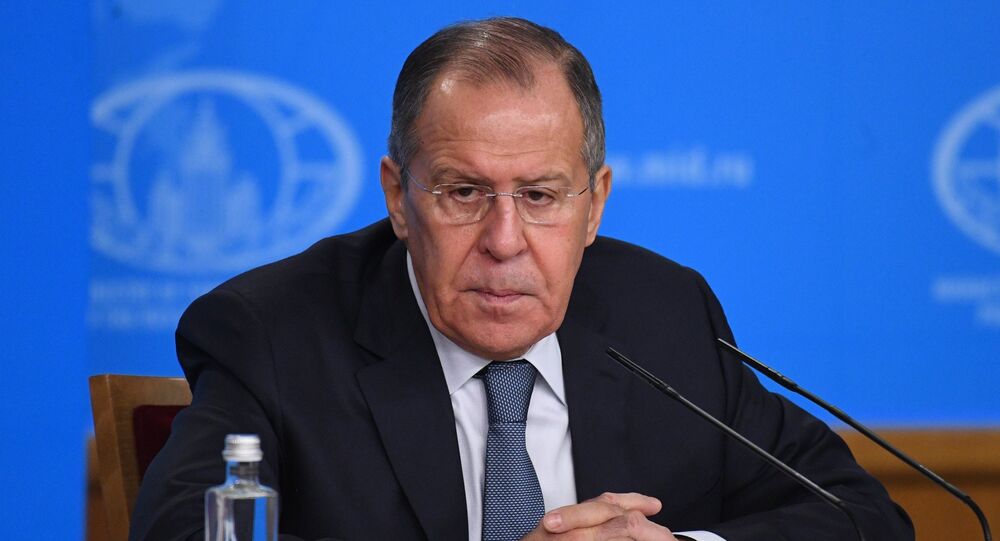 "We have many times pointed out that the permanent boost of the sanctions pressure without providing any evidence to explain such restrictions is counterproductive and pushes our relations into the stalemate," Lavrov said.

At the same time, the foreign minister pointed out that each stalemate may be overcome, as Moscow is always open for dialogue, "based on mutual respect and taking into account mutual interests."

"We must work with all our counterparts, no matter what problems could arise in relations. We are not one of those countries that act as offended: like if you said something about us which is not correct, we will not communicate. This is not our method. We always evaluate the actions of our partners in principle when we do not agree with them, but we never slam the door," Lavrov noted.

© CC BY-SA 2.0 / Kent Wang / Russian embassy
Moscow Demands US Stop Disseminating Confidential Info Affecting Russia's Interests - Foreign Ministry
On August 8, the US administration announced new sanctions against Russia, consisting of two packages, due to its alleged use of chemical weapons against Russian former intelligence officer Sergei Skripal and his daughter Yulia in the UK city of Salisbury in March. Washington said that it would impose sanctions on Russia in line with the Chemical and Biological Weapons Control and Warfare Elimination Act of 1991.

Russia has repeatedly denied involvement in the Skripals case, stressing that London has neither provided evidence nor cooperated with Moscow in investigating the incident. The first round of sanctions under the legislation came into effect on Monday. The more sweeping restrictions are, however, expected to be rolled out in November.

According to the minister, the assassination of the leader of the self-proclaimed Donetsk People's Republic (DPR), Alexander Zakharchenko, is a provocation aimed at hindering the situation in the region.

"This is an open provocation aimed at hindering implementation of the Minsk agreements. The accords, however, have not been implemented by the Kiev authorities before," Lavrov stressed.

He pointed out that under the current circumstances it was impossible to speak about holding the next round of the Normandy Four format talks involving Russia, Ukraine, France and Germany.

"Under current circumstances, it is, of course, impossible to speak about upcoming meetings in the Normandy format as many European partners wanted. That is a serious situation, which must be analyzed. We are doing that now," Lavrov added.

© Sputnik / Alexey Kudenko
Life and Death of Assassinated DPR Head Alexander Zakharchenko
On Friday, Zakharchenko was killed in a bomb blast in the cafe Separ in downtown Donetsk. DPR Finance Minister and Deputy Prime Minister Alexander Timofeev, who accompanied Zakharchenko, is in a moderately severe condition in a hospital. According to the DPR Emergencies Ministry, two people were killed and 11 more were injured by the explosion. Donetsk has accused Ukraine of organizing the assassination.
...
Reddit
Google+
Blogger
Pinterest
StumbleUpon
Telegram
WhatsApp
61