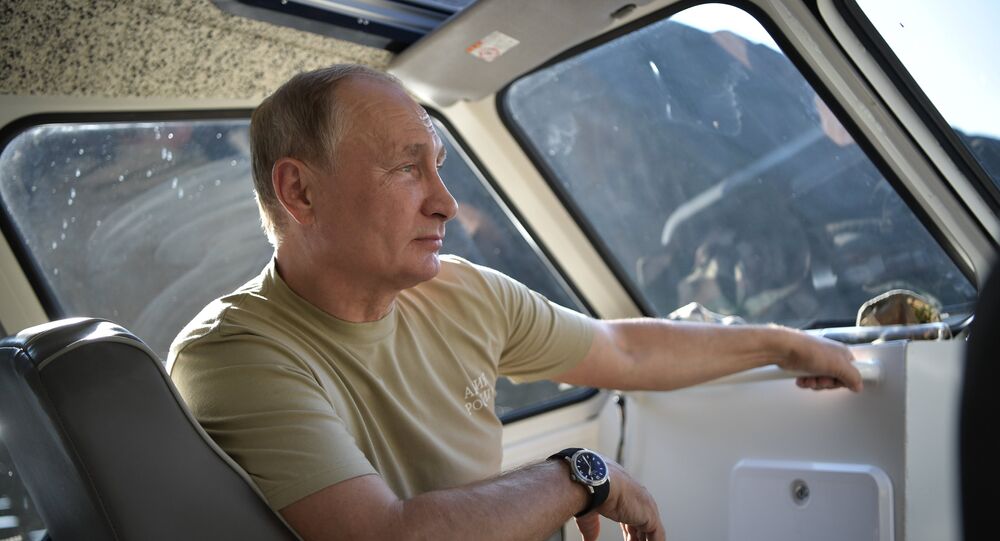 The Russian President’s attendance of the wedding of Austrian Foreign Minister Karin Kneissl ahead of his talks with German Chancellor Angela Merkel grabbed international headlines earlier this month.

Russian President Vladimir Putin's popularity ratings in Western countries show no sign of abating, which is why it's only natural that Austrian Foreign Minister Karin Kneissl wanted him to be in attendance at her wedding ceremony, according to an article by Austrian journalist Robert Misik, published by the Austrian newspaper Der Standard.

In this vein, Misik singles out at least three reasons which explain Putin's popularity ratings, particularly among representatives of Austria's Freedom Party, "Alternative for Germany" and France's National Front.

First and foremost, the Russian President shows himself as a supporter of traditional values, including his ideas related to masculinity and the family.
He stands for order in a modern-day world that "is plunging into an ever greater chaos," Misik underlines.

Secondly, he adds, Putin acts as an opponent of the hegemony of Western countries in the social, military and economic spheres of life.

In particular, the Russian President is against the over-promotion of homosexuality and feminism, as well as NATO and the hegemony of the US currency on the world stage.

READ MORE: WATCH Putin Chill in Tuva Forest During His Trip to Siberia

Putin skillfully opposes himself to the conventional wisdom that liberalism should determine the world order, according to Misik.

Last but not least, Putin's personal charisma is also of great importance, the author of the article points out, praising the Russian President's use of irony, "sarcastic wit" and "excellent sense of humor," something that Misik concludes adds greatly to Putin's huge popularity in the West.