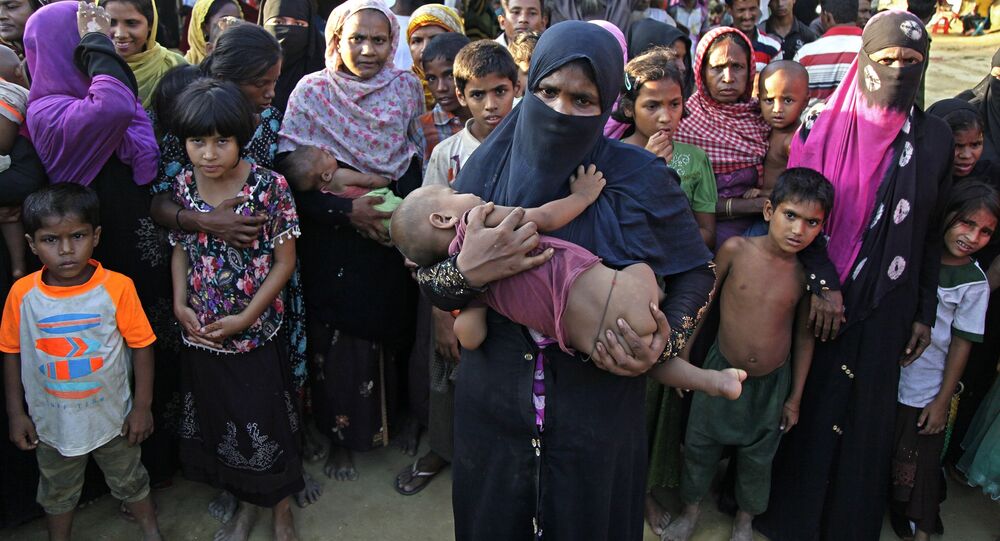 The report comes on the heels of months of investigations by UN personnel, who allege a system-atic campaign of “ethnic cleansing" against Myanmar’s largest minority group.

A United Nations report has recommended that top Myanmar military officials “be investigated and prosecuted” for the carrying out of genocide and other grave atrocities against the Rohingya Muslim minority in the country’s far west.

The report marks the first time that the UN has explicitly called for Myanmar’s officials to face genocide charges over their campaign in the country’s Rakhine State.

© REUTERS / Simon Lewis
Watchdog Doubts Myanmar's Inquiry to Identify Perpetrators of Rohingya Abuses
The report, based on on-the-ground research by the United Nations Fact Finding Mission on Myanmar, serves as a blistering indictment of the South East Asian country’s military, who have long been accused of grave war crimes against the Rohingya.

The publication comes just a year after roughly 700,000 Rohingya men, woman and children fled Myanmar over the border into neighboring Bangladesh amidst violence between the country’s army and a faction of armed Rohingya insurgents.

The report graphically documents numerous cases of mass killing, systematic rape and the torturing of children.

“In some cases, hundreds of people died. Houses were locked and set on fire. Few survived,” the report reads.

Myanmar’s military — called the ‘Tatmadaw’ — have argued that civilian deaths were unintentional in what was merely an effort to root out Rohingya terrorist groups hiding amongst the villagers.

The UN points the finger at particular members of the Tatmadaw’s echelon and blames five senior officials for orchestrating a campaign of ethnic cleansing. In addition, it names the notorious Commander-in-Cheif of the military, Min Aung Hlaing, as being guilty of spearheading the campaign and calls for his prosecution at the International Criminal Court.

Myanmar’s Western-backed leader, Nobel peace prize winner Aung San Suu Kyi, was also singled out in the report over what it described as her “inaction.”

Aung San Suu Kyi, “has not used her de facto position as Head of Government, nor her moral authority, to stem or prevent the unfolding events, or seek alternative avenues to meet a responsibility to protect the civilian population,” the report says.

This is, however, not the first time that the UN has taken aim at Suu Kyi, who was described by former US president Barack Obama in 2012 as “an icon of democracy.” Back in December 2017, the UN’s High Commissioner for Human Rights, Zeid Ra’ad Al-Hussein, suggested that Myanmar’s leader could be “culpable” for the crimes being meted out at that time against the Rohingya, which included forced displacement and mass killings.

"Given the scale of the military operation, clearly these would have to be decisions taken at a high level," said the high commissioner.

The UN Panel also called out social media, particularly industry giant Facebook, for allowing what it described as ‘hate speech’ against the Rohingya to go unchecked online.

According to the UN, Facebook, which has become one of Myanmar’s most used websites in recent years, has been exploited by vigilante groups and the country’s military to propagate hate speech and anti-Rohingya “propaganda.”

Facebook responded immediately to the allegations on Monday by declaring that it has blocked the accounts of 20 Myanmar officials and organizations found by the UN to have “committed or enabled serious human rights abuses.”

The United States, which has long championed Aung San Suu Kyi as a poster girl of democracy promotion, is reportedly conducting its own inquiry into the Myanmar military’s campaign. A State Department spokeswoman has been quoted as saying that the UN report clearly demonstrated “widespread human rights abuses” by security forces.

© REUTERS / Simon Lewis
Watchdog Doubts Myanmar's Inquiry to Identify Perpetrators of Rohingya Abuses
Washington has been accused of foot-dragging over its reluctance to sever the ties with Suu Kyi and condemn her military’s operations as genocide or crimes against humanity in line with the UN’s conclusions.

Yet, one official widely cited on condition of anonymity has said that the latest UN findings could lay enough pressure on the Trump administration for it to take some kind of firmer action, likely in the form of heavy sanctions against Suu Kyi and her government.