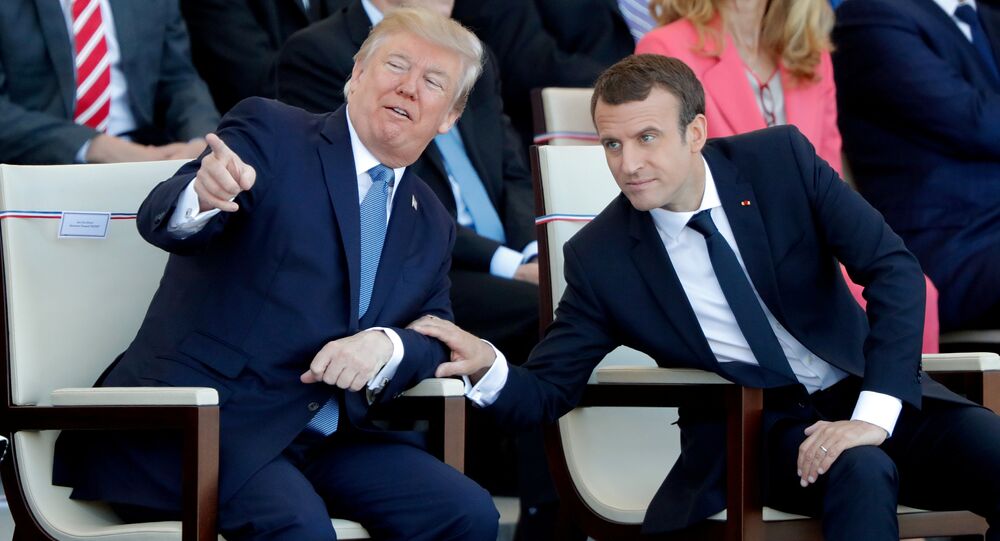 'EU Can No Longer Rely on US for Its Security' – Macron

During his 90-minute speech at the annual ambassadors' conference in Paris, French President Emmanuel Macron focused on an array of pressing issues related to the future of Europe, Brexit and Syria.

The French President has called for mapping out a new security policy for the EU which he said should no longer depend on the United States in terms of defense-related issues.

"Europe can no longer rely on the United States for its security. It is up to us to guarantee European security," Emmanuel Macron underscored.

READ MORE: EU 'Catches Up to US Financial Market' With New Trading Reforms

He lambasted US President Donald Trump's "aggressive isolationism", lamenting the fact that "the partner with whom Europe built the new order of post-war multilateralism appears to be turning its back on this shared history."

Macron called for open and constructive relations between Washington and Brussels, something that he said should be built up by joint efforts of all EU members.

"The question is not about whether I grab Trump by the arm at the next international summit; the question is what are we going to reinvent?" he pointed out.

The Future of Europe

Touching upon the issue, Macron specifically stressed the importance of turning the EU into a more "sovereign" bloc and promised to do more to grapple with growing nationalism in Europe.

READ MORE: Europe Seeking to Boost Ties With Russia, Turkey Apart From the US – Analysts

He said that it was necessary for France to build "a strategic partnership" with Russia and Turkey given that both countries were important for collective security and needed to be tied to Europe. Macron urged Europe to launch a new dialogue on cybersecurity, chemical weapons and other areas of security, in particular, with Russia.

He said that it was France that should go ahead with EU reforms because the country is "paying the price of several decades of a Europe that has become bland, weakened and hasn't made enough suggestions."

"Do China and the United States think of Europe as a power with similar independence to their own? It is not the case," Macron noted.

No Major Shift on Syria

Pointing out that the ouster of President Bashar Assad should not be seen as a pre-condition to end Syria's civil war, Macron at the same time stressed the significance of a negotiated political transition.

"It is not up to France to appoint the future leaders of Syria. But it is our duty and our interest to ensure that the Syrian people will be in a position to do so," he said.

Additionally, he called on Russia and Turkey to use their regional clout in order to help stop the Syrian conflict.

Macron confirmed France's stance which stipulates Brussels clinching a deal with London on the terms of the UK's withdrawal from the EU by the end of this year.

© AFP 2020 / JUSTIN TALLIS
Second Brexit Referendum Not 'Off the Table' - Senior Labour MP
"Brexit is a sovereign choice that we must respect, but it is a choice that cannot happen at the expense of the European Union's integrity," he underlined.

Macron called for "a strong and privileged relationship" between France and the EU" which he warned should not be developed "at the expense of the European Union dissolution."

US Plans to Deploy Its Upgraded Nuclear Bombs in Europe – Reports