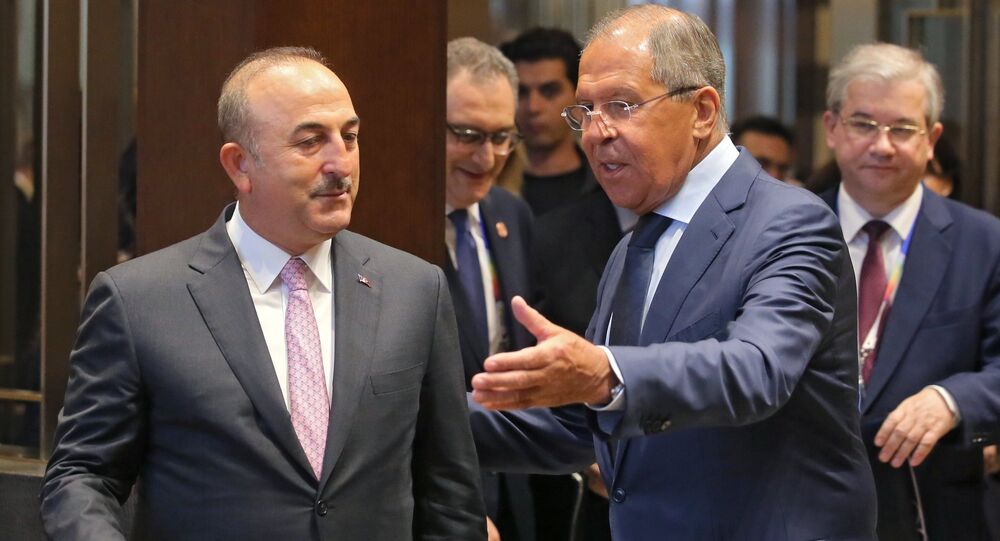 "Turkey is one of Russia's key partners, we see an increase in our economic relations. And we intend to build up our military-technical cooperation," Lavrov said in his speech.

He noted the need for building up "practical cooperation" in the field of military-technical cooperation, as well as other areas — in the automotive, agriculture and banking sectors.

Moscow and Ankara are ready for talks on a mutual basis to facilitate trips for Turkish nationals, Lavrov noted.

"We have reaffirmed Russia's readiness to negotiate the facilitation of trips for certain categories of Turkish citizens on a reciprocal basis and will do so in the near future. We have agreed to create a mechanism for consultations on preparing agreements on this issue," Lavrov told a press conference after talks with his Turkish counterpart Mevlut Cavusoglu.

The ministers have also discussed Syria and the speedy completion of work to create the Syrian Constitutional Commission.

"We discussed international problems, focused on Syria, reviewed implementation of the agreements reached within the framework of the Astana format at the highest level, at the level of experts, reviewed implementation of the decisions by the Congress of the Syrian National Dialogue that took place in Sochi within the framework of creating a constitutional commission, this work continues. We discussed the tasks of its prompt completion," Lavrov told a press conference.

A joint meeting of Russian and Turkish foreign, defense ministers will be held in Moscow, where the sides will discuss the situation in Idlib, Syria, according to Lavrov.

The Russian foreign minister has called for minimizing the risks to the population of Idlib, saying that "the de-escalation zone was not created so that fighters could hide behind peaceful citizens."

Turkey’s Foreign Minister has also commented on the Syria situation, saying that Ankara is interested in the elimination of terrorists in Idlib as they threaten the country’s national security.

At the same time, according to him, "while eliminating terrorists, it is unacceptable to harm the lives of civilians."

"This can provoke a flow of refugees, drama, a human catastrophe," the Turkish diplomat said.

Earlier, the head of the Russian Center for Syrian Reconciliation noted that the militants operating in the Idlib de-escalation zone continued to shell settlements in Syria.

The Idlib province is a part of the northern de-escalation zone in Syria created under the Astana reconciliation process. Most of the province is currently occupied by militant groups, including the al-Nusra Front terror group.

The successful cooperation between Turkey and Russia is a source of envy in some political circles, Turkish Foreign Minister Mevlut Cavusoglu said on Friday.

"We are making an active effort to report to our leadership on the work that has been done. Regular meetings of the presidents are held. And as the presidents said during the meeting in Johannesburg — at the BRICS summit — indeed, this successful cooperation sometimes causes envy in some circles," Cavusoglu said after his meeting with Russian Foreign Minister Sergei Lavrov.

Cavusoglu added that both sides were interested in developing cooperation on regional issues and the international agenda.

Moscow and Ankara are working together to settle the Syrian crisis. Both countries serve as guarantors of the ceasefire in the Middle Eastern state alongside Iran.