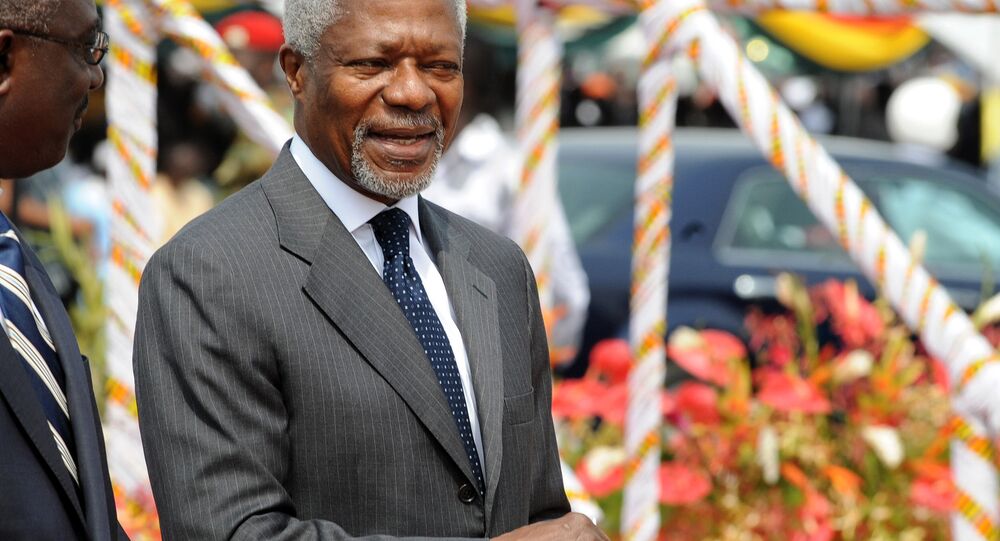 Kofi Annan served as the seventh Secretary-General of the United Nations from January 1997 to December 2006. In 2001 Kofi Annan was awarded the Nobel Peace Prize.

Former UN Secretary-General Kofi Annan has died at the age of 80, according to the United Nations International Organization for Migration. According to reports, Kofi Annan died in a hospital in Bern, Switzerland.

Ghana has declared a week of mourning after the death of Kofi Annan.

"Kofi Annan was a guiding force for good. It is with profound sadness that I learned of his passing." — @antonioguterres

Annan was born in 1938. He graduated from the Kumasi University of Science and Technology, and then went on to study in the US at McAlester College in St. Paul. In 1972, he received a master's degree in management from the Massachusetts Institute of Technology.

According to the information provided on the UN website, K. Annan joined the organization in 1961 and was engaged in administrative and budgetary matters at the World Health Organization in Geneva. In the early 1990s, he took over the post of Assistant Secretary General for Peacekeeping Operations, and then became Deputy Secretary General of the organization. In 2011, Annan served as special envoy of the United Nations and the League of Arab States for Syria.

Tributes have been pouring in from across the globe over the death of Kofi Annan.

"Many years of life of this remarkable man and great politician have been devoted to the service of the United Nations. Having led the United Nations in a difficult period, he did a great deal to implement the goals and objectives of the organization, to strengthen its central role in global affairs. His personal contribution was especially significant in building up the UN peacekeeping capacity, as well as in resolving a number of regional conflicts," the Kremlin’s press service said in a statement attributed to Putin.

"I was fortunate enough to meet Kofi Annan in person. I sincerely admired his wisdom and courage, ability to make informed decisions even in the most difficult and critical situations, his memory will remain forever in the hearts of Russians," the statement read.

Expressing his condolences, former US President Barack Obama stated that Kofi Annan "embodied the mission of the United Nations like few others."

"His integrity, persistence, optimism, and sense of our common humanity always informed his outreach to the community of nations," Obama said. "Long after he had broken barriers, Kofi never stopped his pursuit of a better world, and made time to motivate and inspire the next generation of leaders," Obama stated as quoted by his press office.

Russian Foreign Minister Sergei Lavrov has expressed regret over the passing away of former UN Secretary-General Kofi Annan, emphasizing his contributions to the UN.

"In many ways, Kofi Annan was the United Nations. He rose through the ranks to lead the organization into the new millennium with matchless dignity and determination," Guterres stated.

Austrian Federal Chancellor Sebastian Kurz and UK Prime Minister Theresa May have expressed their grief over the news about the Annan's death.

"Sad to hear of the death of Kofi Annan. A great leader and reformer of the UN, he made a huge contribution to making the world he has left a better place than the one he was born into. My thoughts and condolences are with his family." — PM @Theresa_May

TB: I’m shocked and distressed to hear the news about Kofi. He was a good friend whom I saw only weeks ago. Kofi Annan was a great diplomat, a true statesman and a wonderful colleague who was widely respected and will be greatly missed. My deepest sympathy to Nane and his family

"Kofi Annan, former UN Secretary-General and Nobel Peace Prize laureate, left this world at night. France honors his memory. We will never forget his calm and determined view, the strength of his struggle," Emmanuel Macron wrote on his Twitter account.

German Chancellor Angela Merkel has said that Kofi Annan inspired her and many others with his ideas, his firm convictions and, not least, his charisma.

The Elders, an international non-governmental organization of public figures, peace activists, and human rights advocates, expressed condolences over the death of Kofi Annan.

We are shocked and deeply saddened at the passing of our dear friend, colleague and Chair, Kofi Annan. Statement: https://t.co/jldgJ40AnM pic.twitter.com/iuUXfVbpMj

Former UN Secretary-General Kofi Annan, who died earlier on Saturday, was an extraordinary person and diplomat, who did not receive instructions "from above," but acted independently while drafting reforms, Director-General of the UN Office in Geneva from 2002-2011 and former UN Under-Secretary-General Sergei Ordzhonikidze told Sputnik on Saturday.

"I worked with him for several years, and he was certainly an extraordinary person. He began his career with the most junior UN position and was gradually growing. Kofi Annan was the author of many ideas that the secretary-general should propose to the state for consideration and adoption in accordance with the UN Charter. Kofi Annan was a good manager; he knew the whole UN system and was a very pleasant person. It was interesting to work with him; he was a man with a great sense of humor. He was an extraordinary person," Ordzhonikidze said.

Annan dealt not only with maintaining peace, but also with personnel and healthcare issues, the diplomat recalled.

Our deepest condolences for the passing of H.E. Mr. Kofi Annan, former UN Secretary General. We have lost a great peacemaker and true humanist. May you rest in peace.
Our deepest condolence to Mrs Nane Annan and all the Annan family for the lost. @KofiAnnanFdn pic.twitter.com/MAfUMPqnQB

#KofiAnnan never stopped fighting for justice, peace & dignity for all, knowing this struggle is a marathon not a sprint. He was warm, compassionate & intelligent, exuding dignity & grace. So privileged to have worked with him to tackle climate change, poverty & gender equality pic.twitter.com/NGv74aje2W

A man of.
Peace.
What the world needs now.
RIP #KofiAnnan pic.twitter.com/p47LcWQ32F

I wish to express my deepest condolences to the family and friends of Mr Kofi Annan. His decease is a great loss for peace and freedom in the world. In Catalonia we will always remember his call for dialogue and negotiation with Spain through @TheElders pic.twitter.com/IW011tOf38