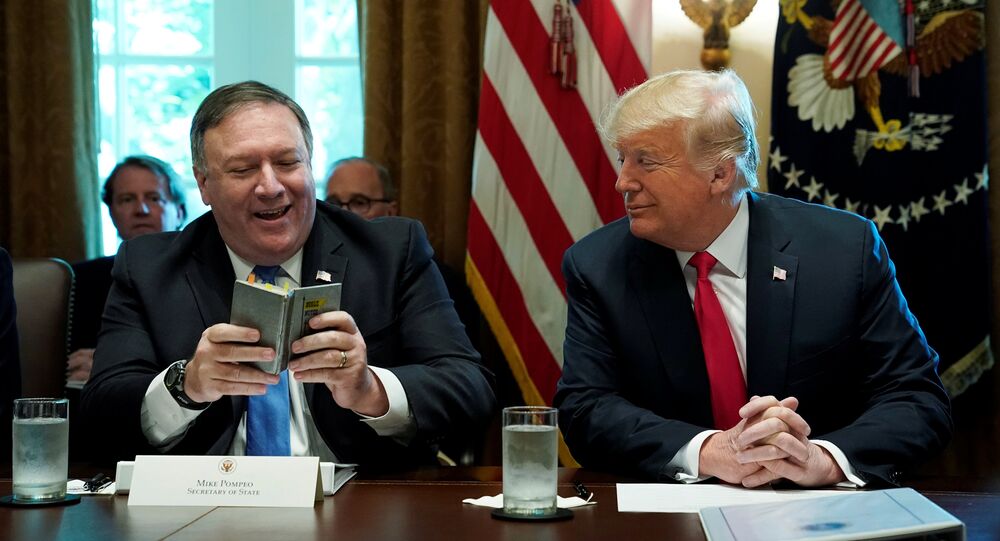 Hook led the Trump administration's attempt to negotiate changes to the nuclear deal with the EU allies before the US president decided to withdraw from the agreement.

US Secretary of State Mike Pompeo has unveiled a new Iran action group to coordinate and run Washington's policy toward Tehran in the wake of the US withdrawal from the 2015 nuclear deal.

“Today I’m happy to announce the creation of the Iran Action Group,” Pompeo told reporters. “The Iran Action Group will be responsible for directing, reviewing and coordinating all aspects of the State Department’s Iran-related activity and it will report directly to me.”

© AP Photo / Carlos Barria
US Ambassador to UK Urges London to Stop Supporting Iran
Brian Hook has been appointed as the new special representative for Iran, who is currently the State Department's director of policy planning. He is expected to oversee implementation of the Trump administration's entire Iran policy.

The Iran Action Group will drive efforts to achieve the US objective of changing Tehran’s behavior and ensuring the State Department is in sync with other inter-agency partners as it pursues its mission, Mike Pompeo said.

Moreover, the Iran Action Group will address all manifestations of the Iranian threat, which has been a force for instability and violence, Hook said. Iran’s destabilizing activity is broad, but includes aspirations of developing nuclear weapons, its support for terrorism, malign cyber activity, proliferation of ballistic missiles and much more, he added.

Prior to the US withdrawal from the Iran nuclear deal in May, Hook was dealing with negotiations with the US' EU allies in order to change the agreement.

The US relations with Iran have further deteriorated in the wake of Washington's decision to withdraw from the historic 2015 nuclear deal in May, as well as to reimpose sanctions on the Islamic Republic. The unilateral move has been opposed by other signatories to the agreement, which have pledged their commitment to the deal.

© Sputnik / Oleg Lastochkin
Switching From Dollar to Gold: Iran Continues Its Struggle With US Oil Embargo
On August 7, the United States officially put into effect the first package of sanctions against Tehran, which are targeting Iran's purchase of US dollar banknotes, trade in gold and other metals and transactions involving the national currency. The second package is set to be introduced on November 4 hitting, among other things, Iran's oil exports and energy sector.

In response to Washington's reimposition of anti-Iranian sanctions, the European Union activated its Blocking Statute, protecting the European companies from the application of sanctions by a third country, in order to exempt the EU firms from complying with the US sanctions against Iran.