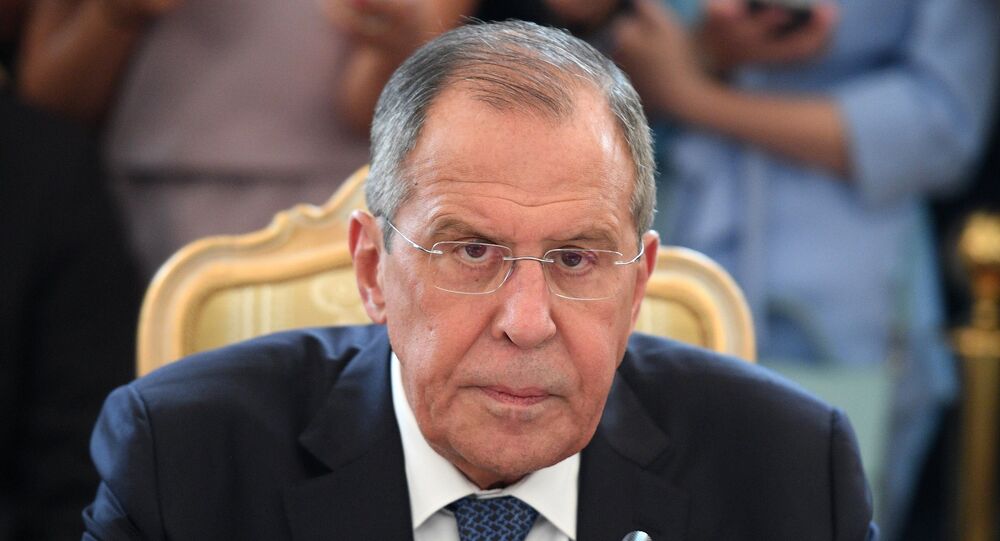 Lavrov: Excessive Use of Dollar Can Make Others Trade in National Currencies

The Russian foreign minister is on a working trip to Turkey, during which he will hold a bilateral meeting in Ankara on Tuesday with his Turkish counterpart Mevlut Cavusoglu to discuss burning international issues.

Lavrov has held a joint press conference with Turkish Foreign Minister Mevlut Cavusoglu after their meeting. The diplomats have exchanged views on other regional and international issues, including the situation in the Middle East and North Africa, in the South Caucasus, Central Asia, as well as in Ukraine and the Black Sea region.

Speaking at the press-conference, the Russian foreign minister said that Moscow hoped a reasonable approach would prevail in international relations and that countries would return to a depoliticized dialogue, adding that Moscow appreciated Ankara's refusal to join the anti-Russia sanctions.

"I hope that objective reality will help common sense prevail and we will return to the fundamental principles laid down in the UN Charter and stipulating collective work on solving global problems while respecting the sovereign equality of states and non-interference in their interior affairs. Interest in solving numerous problems, shared by Russia and Turkey, rests upon such principles," Lavrov said.

According to Lavrov, US sanctions, including the latest against Turkey, undermine all principles of global trade and will over time undermine the role of the dollar as a settlement currency.

"I have already spoken about the sanctions: they are illegal, undermine all principles of global trade and principles approved by UN decisions, under which unilateral measures of economic duress are unlawful," Lavrov said.

At the same time, his Turkish counterpart Mevlut Cavusoglu has called on the US to return to a dialogue, warning that threats and pressure on Turkey would cause chaos.

On the Syrian Issue

During the press-conference, Lavrov noted that both Moscow and Ankara were holding a dialogue on the complete implementation of agreements on the de-escalation zones in Syria, including in Idlib.

"As for Syria, today we are discussing via different channels the objectives of tackling resistance by the remaining terrorist groups and returning the armed opposition that rejects terrorist methods to peaceful life. [We are also] discussing the complete implementation of agreements on the de-escalation zones, including Idlib," Lavrov said.

According to the senior Russian official, Western countries, by imposing sanctions against Russia, Turkey and Iran, were trying to influence the success of the Astana format in Syria.

"Of course, we probably will not see any direct link to the Syrian crisis in the statements that the American side is making when it announces sanctions against our countries. But, objectively, of course, we feel the desire of the West, primarily the United States, but not only it, not to let the Astana process achieve substantive results and portray it as not entirely successful," Lavrov said.

Cavusoglu, for his part, said that terrorist groups that had arrived in Idlib from Aleppo and Eastern Ghouta were operating and urged their elimination, warning, however, against a complete bombing of the de-escalation zone.

"The Idlib zone is home to more than three million civilians, but there are also terrorists from Eastern Ghouta, Aleppo and other zones there. They threaten the civilian population. We should have a common strategy with Russia and other powers, identify and eliminate terrorists. Despite their presence, we cannot bomb the city, as it will result in mass casualties [among civilians]. We should separate radicals and civilians. We must conduct the fight against terrorists together," Cavusoglu said at a joint press conference with Russian Foreign Minister Sergei Lavrov.

Cavusoglu noted the progress that has been made during the Astana peace process.

"Within the framework of the Astana process, we have taken measures aimed at building more confidence between the Idlib opposition and the government. We have [established] 12 observation posts, we are doing our best to reduce tensions in this region," he stressed.