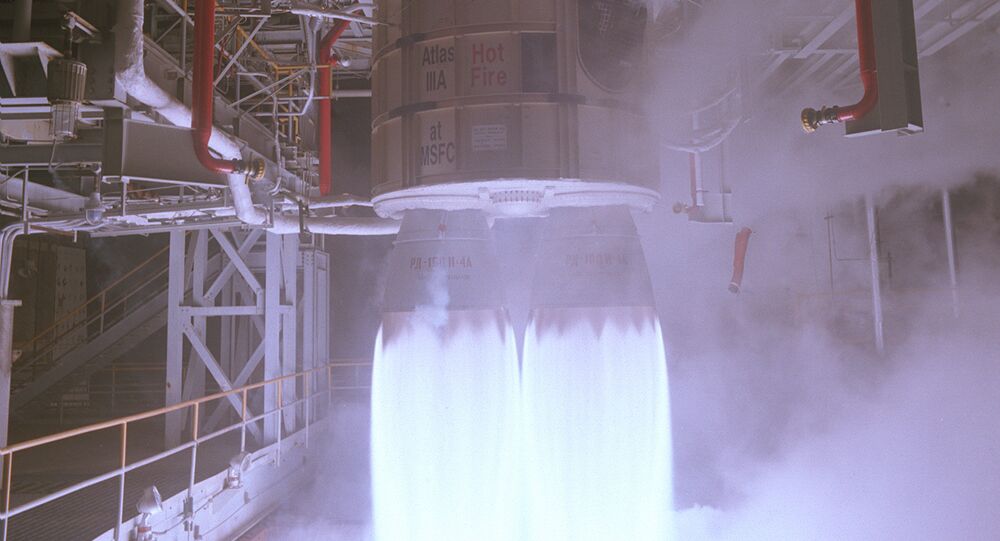 At present, NASA and the US military continue to rely on the Russian-made RD-180 and RD-181 engines due to a lack of reliable domestic alternatives for their rocket systems.

NASA has declined to comment on how exactly it would react to a possible halt in the supply of Russian rocket engines to the United States in response to Washington's new sanctions, referring only to secondary companies' responsibilities to fulfill their contractual obligations.

"Companies which launch satellites and scientific instruments for NASA on a commercial basis, as well as those delivering cargos to the International Space Station, are responsible for providing the launch systems necessary to fulfill the mission contracts. If some components become unavailable for any reason, the companies are responsible for taking the necessary steps to fulfill the contracts," a NASA representative told Sputnik.

© AP Photo / Maxim Marmur
NASA Certifies Russia's RD-180 Rocket Engines for Manned Flights
On Thursday, in response to Washington's new sanctions against Moscow, senior Senate lawmaker Sergei Ryabukhin warned that Russia's response to sanctions might include cutting off the sale of the RD-180 rocket. "We have something to retaliate with, if the president decides to do so and there is the political will," the senator said, pointing to the engines' dual-use status, i.e. their use to put both civilian and military satellites into orbit.

Russia's NPO Energomash began supplying its rockets to the United States in 1997. The engines were used by the Lockheed Martin Atlas III rocket and its successor, the United Launch Alliance Atlas V. Amid the deterioration of relations between the US and Russia, the US Congress tried to impose a ban on the rockets' use after 2019, only to renege on the idea after it became clear that US companies wouldn't be able to create a domestic alternative in time. Earlier this year, it was reported that the RD-180s would continue to be used until at least 2024, and possibly until 2028. Last month, Energomash announced that a contract had been signed on the delivery of more RD-180s to the US later this year.

In addition to the RD-180, Energomash also supplies its RD-181 engines, intended for use aboard the Antares rocket, to its US partners.

US companies engaged in commercial satellite launches and missions for NASA include the United Launch Alliance, Orbital ATK (Northrop Grumman Innovation Systems as of 2018) and SpaceX; their rocket fleets consist of the Atlas V, the Delta IV, Delta Heavy, Antares, Falcon 9 and Falcon Heavy.

© Sputnik / Natalia Seliverstova
'We Will Call It a Declaration of Economic War': Russian Prime Minister Warns US Against Sanctions on Banking, Currency
The US State Department slapped Russia with a new package of sanctions on Wednesday, with the measures slated to take effect later this month. The sanctions were introduced over accusations of Russian involvement in the March poisoning of former Russian intelligence officer Sergei Skripal and his daughter Yulia in the UK. Moscow has repeatedly pointed out that neither London nor Washington have presented any evidence to link the poisoning to Russia. On Friday, Russian Prime Minister Dmitri Medvedev warned that Moscow sees the measures as possible preparations for an economic war, and will respond accordingly.
...
Reddit
Google+
Blogger
Pinterest
StumbleUpon
Telegram
WhatsApp
453

Deputy PM: Russia May End Supplies of Rocket Engines to US, No Decision Made Yet