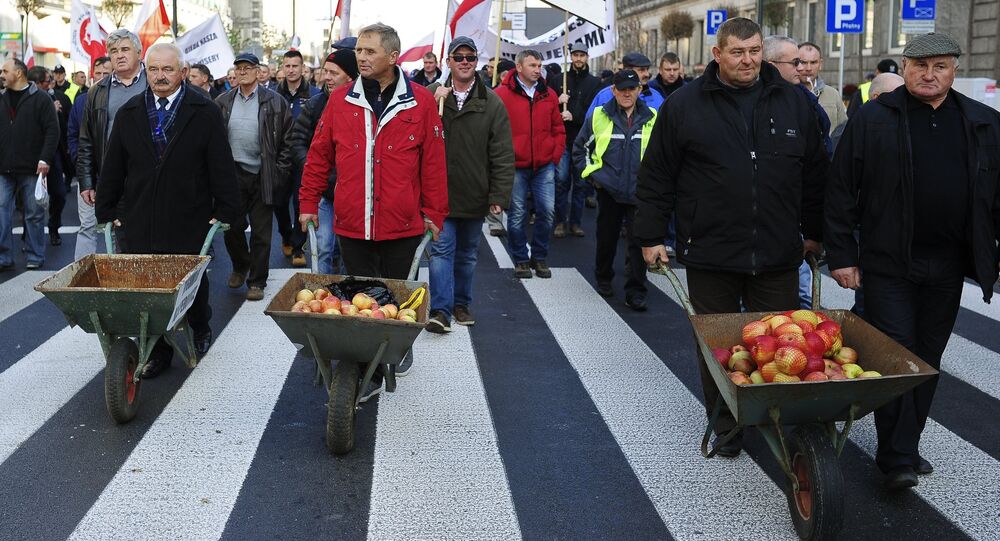 MOSCOW (Sputnik) - Tuesday marks the fourth anniversary of the Russian import ban on certain Western products in response to Ukraine-related sanctions, as some EU countries continue to struggle to change the anti-Russia policy to revive trade.

On August 7, 2014, Russia imposed a food embargo on countries that adopted sanctions against Moscow over Crimea's reunification with Russia and alleged interference in the conflict in Ukraine. The food embargo banned the imports of meat, fish and seafood, vegetables, fruit and dairy products from the EU countries, the United States and several other states. The ban has recently been prolonged until the end of 2019.

Losses For The West

© Sputnik / Grigori Sisoyev
EU Slaps Sanctions on Six Russian Companies Over Crimea
Moreover, losses from anti-Russia sanctions imposed by the Western nations cost the economy of the European Union $3.2 billion a month for the first three years of restrictive measure being in effect, or over $100 billion, compared with $55 billion lost by the Russian economy, according to Idriss Jazairy, the UN special rapporteur on the negative impact of the unilateral coercive measures.

"The EU believes that the Russian ban against EU agri-food products is not justified since it is retaliatory in nature. The ban is also hurtful for the Russian population and economy," a source at the European Commission told Sputnik.

The export restriction had such negative effect because Russia remains the fourth biggest importer of EU agricultural and food products after the United States, China, and Switzerland.

"It is very difficult to determine the exact amount of losses triggered by the imposed embargoes and countermeasures. Reliable sources of German industry estimate that Russia and the EU together have lost more than 100 billion Euro in trade volume since 2014. Further collateral losses and damages have to be assumed. In addition, there are significant lost opportunities for trade growth to the detriment of both sides," Dr. Roland Hartwig, vice-chairman of the Alternative for Germany (AfD) party's parliamentary group in the Bundestag, told Sputnik.

Some EU countries have been subject to greater losses due to a greater value of sanctioned food exports to Russia, such as Poland, Norway, Germany, France, and Italy.

"The impact of the Russian sanctions on Italy is devastating. I think Italy is the EU country most affected by the Russian sanctions. Italy has lost billions of euros in all sectors affected by counter sanctions introduced by Moscow. Fruit, cheese, meat… And other billions have been lost from sectors indirectly affected as fashion, design, furniture… Recent calculations tell us that Italy loses about 3 billion a year and this happens since 2014. We are coming to crazy numbers of loss," Gianmatteo Ferrari, a member of Italy's Lega party, told Sputnik.

Italy, in particular, has been also greatly hit by EU-imposed financial sanctions that blocked trade financing. According to President of the Russian-Italian Chamber of Commerce Rosario Alessandrello, the Italian agricultural sector was most affected by the Russian sanctions, with the country losing 11-12 billion euros ($12.9-14.1 billion) in exports as well as 200,000 jobs over the first three years of sanctions.

"Financial sanctions that do not allow regional, construction banks to finance contracts for the import of equipment, for example, materials are the heaviest sanctions that affect the situation," Vittorio Torrembini, vice president of the Association of Italian entrepreneurs in Russia (GIM-Unimpresa), told Sputnik.

France for its part expressed hope that some of the Russian sanctions on French food products would be removed in the near future, with French Minister of Economy and Finance Bruno Le Maire advocating to restore "active cooperation with Russia in the area of agriculture."

"It [the sanctions] was a wrong decision by our country. It was taken by [former] President [Francois] Hollande but President [Emmanuel] Macron continued the policy [of sanctions on Russia]. It is a very wrong policy for two reasons. First, there is no geopolitical reason to sanction Russia on the Ukrainian situation, but second, and most important for us, it’s a very wrong decision for our food industry in France," Damien Lempereur, the spokesman for the Debout La France party told Sputnik, adding that the French government should lift sanctions against Russia "in the interest of France, of our food and agricultural industry."

Similarly, Italy has also been pursuing a dialogue at the EU level and in cooperation with Russia in order "to change the wind that blows against Russia" and abolish sanctions.

"Italian Ambassador to Russia [Pasquale Terracciano] has been working at the EU level for a long time to unlock the situation with the European Bank for Reconstruction and Development, which previously guaranteed investments. We are working, but so far the results are weak, it is very difficult to change the wind that blows against Russia," the Association of Italian entrepreneurs in Russia told Sputnik.

According to the association, Italy's export to Russia peaked at $15 billion and averaged at $12.5 billion before sanctions.

The Russian agricultural sector has seen a significant improvement due to the government's policy in this area following the introduction of Western anti-Russia sanctions in 2014 over the Ukrainian crisis. Russia focused on import substitution, thus giving impetus to the development of the agricultural sector.

"I am not sure that the ban was bad for Russia because it helped to diversify Russia’s agriculture," Lempereur of the Debout La France party argued.

READ MORE: Rome to Be 'One of the First' to Support Lifting Anti-Russia Sanctions — Salvini

As the result, Russia cut imports of agricultural products almost by 50 percent, or $20-25 billion, over the first three years of the sanctions and aimed to be self-sufficient in all products, except for citrus fruits and bananas, according to Russian Agriculture Minister Alexander Tkachev.

"It is historically proven that whenever the West puts sanctions on Russia, Russia is strengthened. And the West is weakened," Gianmatteo Ferrari, a member of Italy's Lega party, told Sputnik.

Meanwhile, the Russian government also focused on increasing exports of its own products. Currently, the exports of agricultural products from Russia are set to reach $30 billion by 2025 or even exceed this figure, according to the Russian Agriculture Ministry’s estimates.

© Sputnik / Svetlana Samsonova
Goats vs Sanctions: Meet Russian Farmer Whose Herd Thrives Thanks to Restrictions
Despite the food embargo being in effect until the end of 2019, some countries succeeded in partially restoring trade with Russia by means of exporting goods, not on the sanctioned list. For example, the EU agro-food exports to Russia have recovered and increased by 20 percent in 2017 compared to 2016, reaching a record $160 billion in 2017. However, main EU food and agricultural exports to Russia are alcoholic drinks, chocolate, and pet food now as they are not subjected to Russian restrictions.

"There is an increase in exports from Italy, according to official statistics by 26%, but statistics need to be analyzed more carefully, because, from the beginning of 2018, Russian customs authorities and other structures began implementing tougher policies and control of all operations that were previously not very transparent," the Association of Italian entrepreneurs in Russia confirmed to Sputnik.

In addition, some farmers, including in Finland and Germany have been "increasingly successful in replacing the former Russian market with other markets," according to the AfD party's parliamentary group in the Bundestag.

As for Finland, it found new markets in France and Saudi Arabia that helped to restore the pre-sanctions export volume, according to the Food From Finland export development program.

The European Union introduced sanctions against Russia in 2014, citing Moscow’s alleged involvement in the military conflict in Ukraine’s eastern Donbas region and Crimea's reunification with Russia as a result of a referendum. Russia has denied having a role in the conflict and said that the Crimean referendum had been held in line with international law.

Moscow retaliated to the sanctions by imposing a food embargo on products from the states which had targeted it with restrictions. The West's anti-Russia sanctions have significantly expanded since then, bringing Russia-West relations to a new low.

Goats vs Sanctions: Meet Russian Farmer Whose Herd Thrives Due to Restrictions