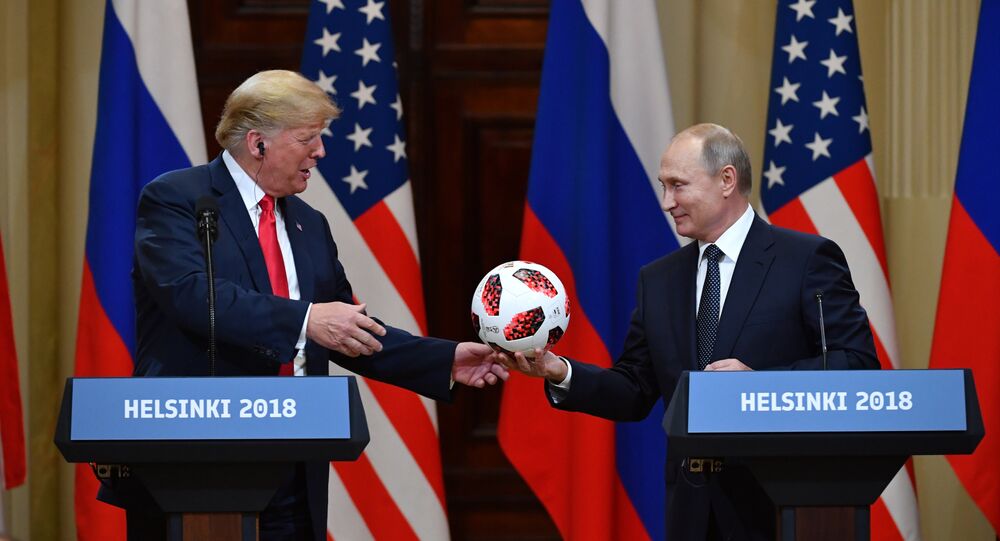 During their meeting in Helsinki, Russian President Putin presented the soccer ball to Trump after the latter congratulated Russia with successfully hosting the World Cup.

The soccer ball presented as a gift to US President Donald Trump from his Russian counterpart Vladimir Putin during the Helsinki summit contains a chip capable of transmitting information to nearby cell phones, Bloomberg reports.

The media outlet notes however that the chip in question isn’t some kind of high-tech gadget but a new feature of the Adidas AG ball: an near-field communication tag which "allows fans to access player videos, competitions and other content by bringing their mobile devices close to the ball."

© REUTERS / Kevin Lamarque
Bolton Delivers Offer to Hold Trump-Putin Summit in Washington in 2018 – Kremlin
"The feature is included in the 2018 FIFA World Cup match ball that’s sold on the Adidas website for $165 (reduced to $83 in the past week),” Bloomberg states, adding that Adidas declined to comment if the chip could be employed by Russian hackers to stage possible cyber-attack.

The Hill also points out that the ball underwent a security screening by the US Secret Service, as is customary for all the gifts given to US president.

READ MORE: Majority of US Voters Think Russia Has Compromising Material on Trump

On July 16, Russian President Vladimir Putin and US President Donald Trump met in Helsinki during a one-on-one summit dedicated to a number of pressing issues, including alleged Russian meddling in the US presidential vote, Syria, gas supplies to Europe and the Iranian nuclear deal.

During the meeting, Trump congratulated his Russian counterpart for hosting “one of the best” FIFA World Cups ever, while Putin presented the US president with a symbolic gift, a soccer ball, jokingly remarking that “now the ball is in your court.”