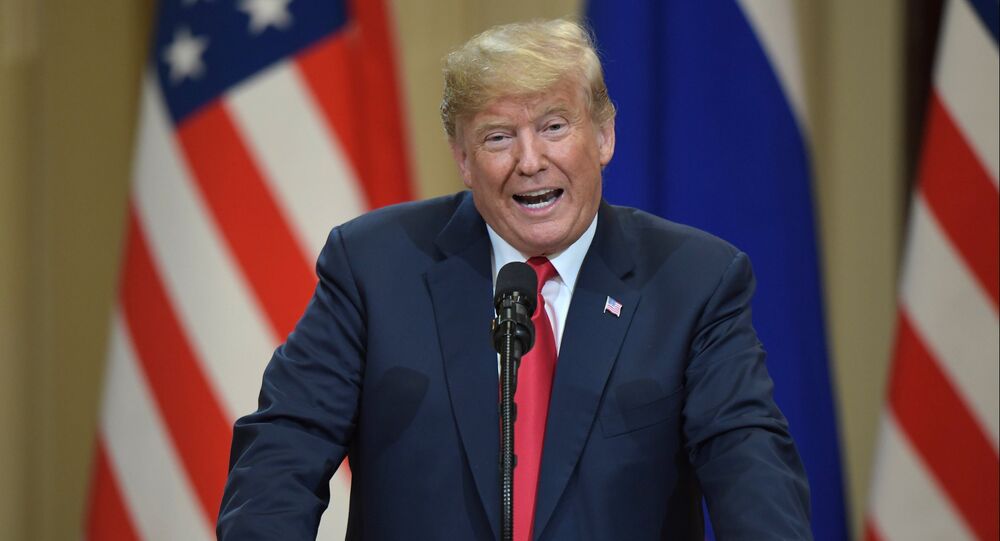 US President Donald Trump's first ever one-on-one summit with Russian President Vladimir Putin has encountered strong resentment in Washington, as many American officials have accused him of appearing weak as he stood next to Putin in Helsinki, leading some to believe Russia had "dirt" on him.

The US president wrote on his Twitter account that he made no concessions to Putin during their recent meeting in Helsinki, since the presidents "merely talked about future benefits for both countries." Trump, however, hasn't disclosed any additional details of the private conversation between the head of state.

When you hear the Fake News talking negatively about my meeting with President Putin, and all that I gave up, remember, I gave up NOTHING, we merely talked about future benefits for both countries. Also, we got along very well, which is a good thing, except for the Corrupt Media!

In the wake of the summit, Trump faced severe criticism over his stance during the talks with Putin and the press conference aftrewards. Republican lawmaker Bill Pascrell sent an open letter to the House of Representatives, demanding Trump's translator Marina Gross, the only American apart from Trump in the room during the Trump-Putin summit, to testify to the goings-on. "The American public deserves to know if the president made any further concessions, revealed national security secrets, or tried to profit off the presidency," he wrote in a letter.

© REUTERS / Kevin Lamarque
Trump Accuses 'Fake News' of Attempt to 'Disparage Great Meeting With Putin'
The disappointment in Washington was prompted by several controversial remarks during Trump's meeting with Putin, including that the United States was to blame for the poor state of bilateral relations. The US president also cast doubt on the US intelligence community's conclusion that Russia interfered in the 2016 election, an allegation that Moscow has repeatedly denied.

Trump and Putin met on July 16 for their first official summit in Helsinki, Finland. The two presidents had a one-on-one private conversation followed by an expanded meeting. The two heads of state discussed the Syrian refugee crisis, situation in Ukraine, nuclear proliferation and Russia's alleged meddling in the 2016 US presidential election.