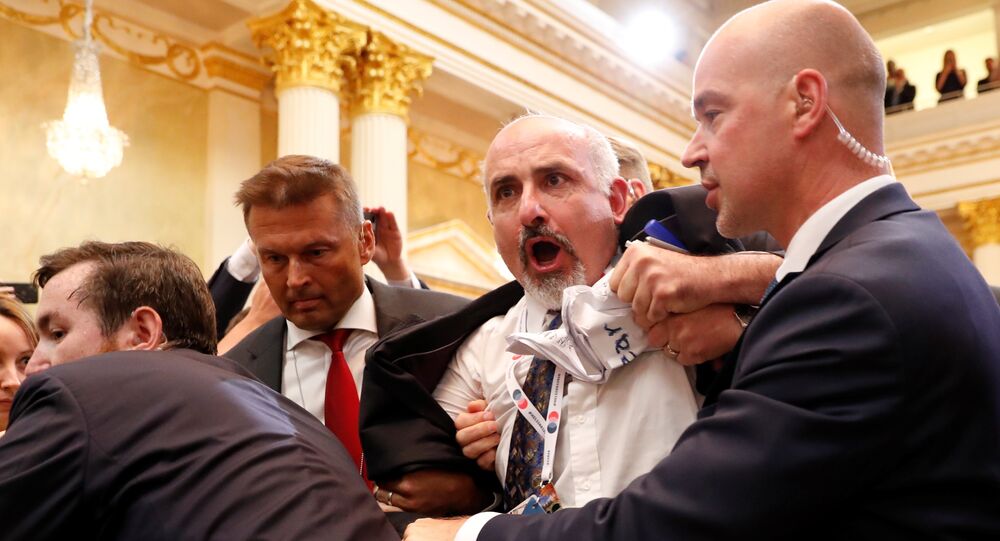 Authorities have yet to comment on the incident, which took place just minutes before the Putin-Trump press conference kicked off.

A video showing a man who is believed to be an American journalist being removed by security from the joint Putin-Trump presser has been released on Twitter by reporters covering the Helsinki summit.

According to an NBC journalist present at the scene, the man was dragged out of the news conference "for angrily objecting to US Network correspondents standing and talking live 4 rows from him." At the same time, Reuters reported that the person involved held a banner, saying "nuclear ban treaty."

Media reports suggested that the so-called "protester" journalist was working for The Nation. As reported by Reuters, a US Secret Service agent spoke with the man, who has yet to be identified, before Finnish security forcibly escorted him from the hall, minutes before the presser started.

Neither the nation-host Finland, nor US' or Russian officials have commented on the incident.

After holding one-on-one talks for 2 hours and 10 minutes, Russian President Vladimir Putin and US President Donald Trump are holding a press conference in Helsinki.