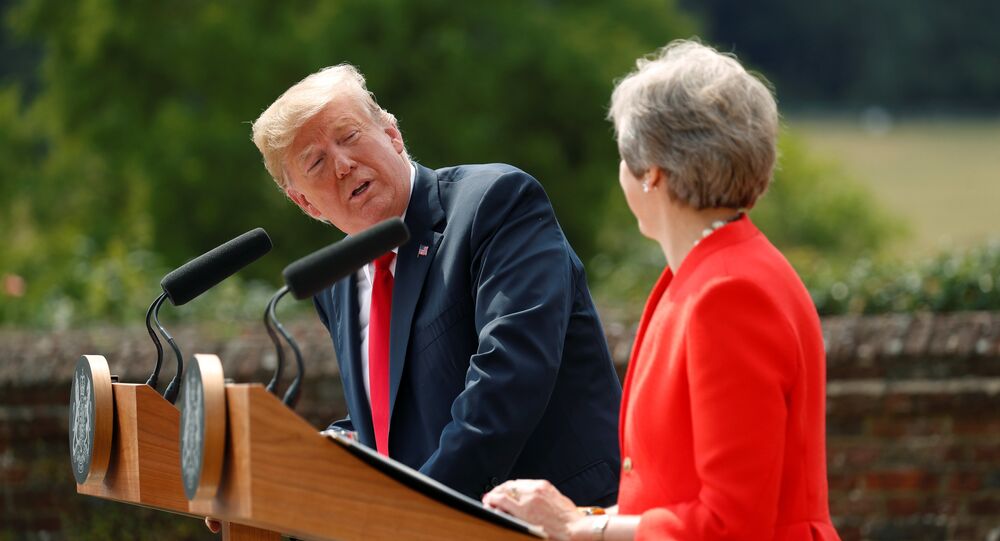 Days before the much-anticipated summit with President Vladimir Putin, Donald Trump met with UK Prime Minister Theresa May, who thanked the US president for his “support in responding to the appalling use of a nerve agent in Salisbury.”

According to Bloomberg, citing Theresa May’s spokesperson, President Trump promised to raise the Skripal poisoning case at the summit with Putin.

Over the weekend, Trump made his first state visit to the UK, where he held a joint press conference with Theresa May, who welcomed the US president’s forthcoming meeting with Putin.

“I thanked President Trump for his support in responding to the appalling use of a nerve agent in Salisbury, after which he expelled 60 Russian diplomats. I welcome his meeting with President Putin in Helsinki on Monday. We agree that it is important to engage Russia from the position of strength and unity and we should continue to deter and counter all efforts to undermine our democracies,” she said.

Screenshot/Imogen Barrer
All Clear Given After UK Police Respond to Medical Scare Near Skripal Poisoning Site (PHOTOS, VIDEOS)
In March, former Russian intelligence officer Sergei Skripal and his daughter Yulia were found unconscious in the town of Salisbury, UK after allegedly being exposed to a military-grade nerve agent, later identified as Soviet-made Novichok.

Immediately after the incident, the British authorities rushed to accuse Russia of attempted murder without having proof – Moscow denied any involvement and offered assistance in the investigation of the poisoning instead, which was ignored by London.

Having concluded that it was “highly likely that Russia was responsible for the act against Sergei and Yulia Skripal,” Theresa May said that Moscow was either accountable for the poisoning, or allowed the nerve agent Novichok, “developed by Russia,” to get into the hands of the perpetrators.

Following her remarks, she ordered the largest expulsion of Russian diplomats from the United Kingdom since the Cold War. In a reciprocal move, the Russian Foreign Ministry declared 23 UK diplomatic workers personae non gratae, having also revoked its agreement on the operations of the UK Consulate General in St. Petersburg.

© AFP 2021 / Brendan Smialowski
Trump Says He Has Been Tougher on Russia Than Anybody, Moscow Probably Regrets He Became President
In solidarity with the UK, some 30 countries, including the US, Canada, Norway, Ukraine and the majority of the EU member-states, banished over 150 Russian diplomats – Russia, in turn, ousted an equivalent number of foreign diplomatic workers.

Despite the claims that the toxic substance, used against the Skripals, had a lethal effect, and the two might never recover again, Yulia and Sergei regained consciousness and were discharged from the hospital on April 11 and May 18, respectively.