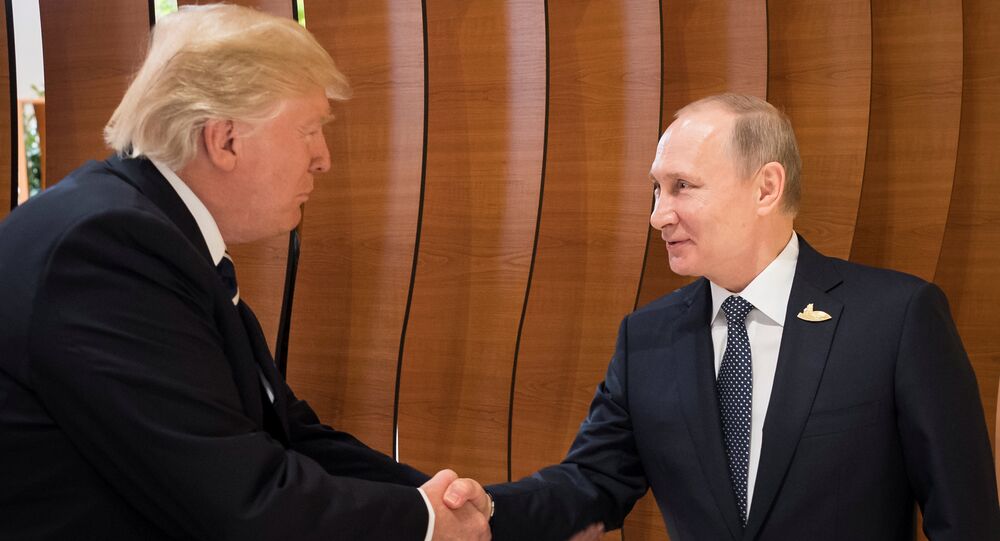 Walid Phares, US President Donald Trump's former adviser on the Middle East, has discussed the relations between Washington and Moscow ahead of the upcoming Helsinki summit.

Sputnik: How high on the agenda of the Helsinki summit between presidents Putin and Trump do you expect Syria and Iran to be? How do you explain the timing of this summit — why do they need to discuss the Mideast exactly now?

Walid Phares: According to what is being circulated and to sources, the issues of the war in Syria and the Iranian behavior in the region are projected to be among the highest if not the highest in importance at the summit between President Trump and President Putin. There is a large pressure from the US public and US Congress to find a solution to the war in Syria. Also let's note that the US has a presence in eastern Syria and is involved in the campaign against ISIS [Daesh*], still to be finished. Add to it the acute humanitarian crisis with millions of Syrian refugees dispersed in the region and around the world and the jihadi use of such drama to infiltrate communities and countries. On that ground alone, the US wishes to resolve the Syrian conflict which has already killed half a million and injured even more people.

As for Iran, the recent withdrawal by President Trump from the JCPOA has created a new US position which will be launching more sanctions soon on Tehran. Add to it that the US is concerned about Iran's military role in the region, particularly in Iraq, Syria, Lebanon and Yemen. Thus, Washington wishes to discuss this file with great powers and the holders of veto power in the UN Security Council.

As for the timing, any date chosen would have been called a timing issue in relation to any other event worldwide. The Trump Administration wanted to address Syria and Iran since last year, and thus holding such a summit between President Putin and President Trump would have been logical from a world powers perspective since last year. However due to many circumstances and developments, the summit was decided for this date in July and possibly aligned with other presidential travel plans to Europe.

READ MORE: A Look at How Chemistry Between 'Talented' Trump and 'Strong' Putin Has Evolved

As to why to discuss the Middle East now? I think world powers including the Europeans and China needed to discuss the Middle East a while ago. Matters are delicate and explosive in the region and it is important that the US and the UN Security Council permanent members address these crises no matter what the differences and issues are between the US and Russia. We all know how acute are the crises between the two countries but both are responsible internationally and need to act when and if they can to reduce conflicts in several areas of the world.

Sputnik:  Do you expect any kind of a deal on Syria in Helsinki? What can it be?

© AP Photo / Pablo Martinez Monsivais
Netanyahu, Trump Discuss Iran, Syria Ahead of Helsinki Summit With Putin
Walid Phares: I don't know if a deal per se can be produced at the Helsinki summit, but agreements on general principles regarding Syria are very possible. It is in the interest of the international community and the Syrian people themselves that some sort of agreement be reached. It should first consolidate or impose a real ceasefire across the country, reassure all Syrians that the political process will include them, a return of refugees, and end to ISIS and a pull out of foreign forces and militias. If these principles are agreed on, a better situation could emerge. Even a platform on principles to resolve the conflict and stop the war would be a good thing to do.

Sputnik: In your opinion, will Trump insist that Russia use its leverage on Iran and make it withdraw from Syria's south? How much a "red line" is it for the US and why?

Walid Phares: I hope so and expect so. The US wants to see Iran and all other foreign forces and militias to pull out from Syria. The US and Russia can make this happen if they agree on it. Definitely pulling Iranian forces from southern Syria is a priority in order to separate them from Israel and keep them away from Jordanian borders. Red lines are set up if such forces are not withdrawn but if there is a US-Russian agreement on a security plan for Syria, pulling Iranian forces from southern Syria could happen as part of such a security plan. There could be many scenarios that includes other parts of Syria and possibly also Lebanon, but first there need to be an agreement on stopping the war and resolving the crisis politically. That would also mean putting pressure on the Assad regime to stop its military operations.

Sputnik: In your opinion, can the two leaders agree that the US withdraws from Syria and hands over its military base in Al-Tanf to the Russian control?

© Sputnik / Michael Alaeddin
Syrian Army Takes Control of Nasib Border Crossing Point With Jordan
Walid Phares: It would be unlikely that the US would hand over al-Tanf in eastern Syria to Russian forces that are mainly based in western Syria, unless some unpredictable event were to take place. Al-Tanf is in the US operation zone against ISIS and links northern Syria to Jordan’s US bases. It would be like asking Russia to hand over Tartus to the US. Wouldn't be realistic. More pragmatic would be to create a balance between the Russian backed zones in the West and the US protected zones in the East, then head to talks to resolve the problem of Syria as a whole

Sputnik:  In your view, how will Trump's policy on Syria develop in future? Will the US continue supporting certain opposition groups and forces, or is it ready to cease its support? How important is it for the US to participate in the political settlement on Syria — i.e. constitutional commission creation etc.?

Walid Phares: So far US policy is based on the following:
a. Protect the north eastern area with its Kurds, Arabs and Christians
b. Eliminate the rest of the ISIS enclaves along the border with Iraq
c. Maintain contact with Syrian tribes in the east of Syria to interdict the return of ISIS
d. Keep Iran backed militias away from these zones

Based on these principles, the US can and will engage in discussions with the other main players in the international community, including Russia which has a presence in Syria and influence over Iran and Assad. Entering the fray of political constitutional talks to find a solution is within US goals as well. However, there need to be assurances and guarantees that in return for a political solution, Iranian and Iranian-backed forces and militias are withdrawn from Syria and all ethnic and religious communities are recognized and granted their rights.

The US Administration cannot back Jihadi organizations which are on its terror lists such as ISIS [Daesh], AQ [al-Qaeda], al-Nusra [Front]* or other armed groups with Jihadi ideologies. Besides Congress is studying legislation to put the Muslim Brotherhood and affiliates on designated terrorist lists. Not sure if it will pass soon, but this will put pressure on the Administration to stay away from Ikhwan linked militias.. This would leave the US to support only the moderate, secular, democratic forces of all ethnicities including Arab Sunnis, Kurds, Christians. And I would add if there are Alawi moderates non-affiliated with Iran, there could be dialogue with them.

Hence, the US would engage in backing constitutional discussions along with the international community if all extremist militias are out of the picture.

In a sum, the US excludes the jihadists and Russia excludes the Iran-linked forces. That could be a basis for the next phase for talks to reach a post-war Syria and eventually a post-Assad constitutional era.

Sputnik: Putin met with Rouhani's top aide on Thursday. Putin met with Netanyahu on Wednesday. Putin will meet with Abbas on Friday, and just two days later he will meet with Trump in Helsinki. What kind of a bigger game on the Middle East is unfolding? Is there any kind of a new security structure for the Mideast brewing? How do you interpret all these meetings with top officials in a row?

Walid Phares: I don't have any information about the Russian ideas concerning the Middle East other than that they are backing Assad and supplying Iran with weapons. If Moscow start changing its course by pulling Iran out of Syria and consolidating a real and firm ceasefire it could help creating a basis for an international framework backed by the US, Russia and the UN to pacify Syria, return of refugees, and the creation of a new political system that would allow all communities to be represented.

If Syria is stabilized the next phase would be to move collectively towards a resolution of the Israeli-Palestinian dispute, and a common security system against terrorism in the region, could be generated. Solutions can be found but the major players must adopt concessions to allow all parties to be represented and secured, and that the long term goal would be free civil societies. Because personally I believe that ordinary people in the Middle East and everywhere want normal life, peace and freedom. Any arrangement that doesn't meet these aspirations will eventually fall.

*Daesh, also known as ISIS, Islamic State, as well as al-Qaeda and al-Nusra Front are terrorist groups banned in Russia

The views and opinions expressed in this article by Walid Phares are those of the speaker and do not necessarily reflect Sputnik's position.