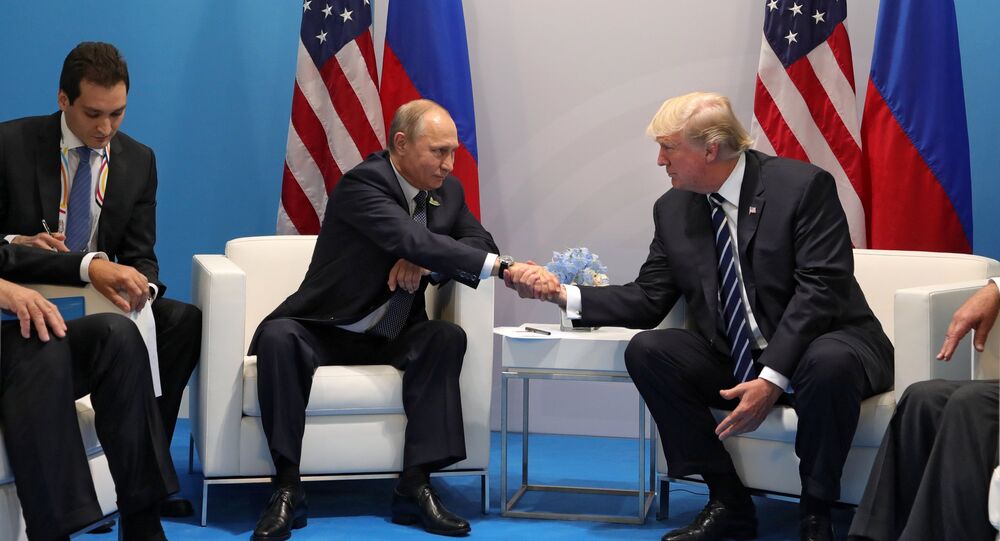 BERLIN (Sputnik) - US President Donald Trump has repeatedly told Republican congressman from Iowa Steve King that he was prepared to face strong domestic backslash over his upcoming summit with Russian President Vladimir Putin, and was more concentrated on the agenda of the talks and efforts to improve bilateral ties, King told Sputnik on Sunday.

"The point of this meeting is to show the world that we are working to strengthen our relations. This is particularly hard for President Trump because they are still investigating Russian ties. He has said to me on a number of occasions 'I can take the heat! Let's do what is right!' I am glad he is doing that," congressman from Iowa Steve King told Sputnik on the sidelines of the OSCE Parliamentary Assembly's session in Berlin.

Putin and Trump are expected to meet in Finland on July 16 to discuss bilateral ties and various issues on the international agenda, including the situation in Syria and Ukraine conflict. That will be their first full-fledged meeting since Trump's taking office in January 2017.

© AP Photo / Hau Dinh
NATO Fears Potential Trump-Putin Deal Will Leave Europe 'Vulnerable' – Reports
The upcoming meeting is accompanied by multiple media reports citing US and EU sources who express concerns that Trump could allegedly make disproportionate concessions to Russia on Crimea, Ukraine, and Syria, and be outplayed by Putin at the summit. The reports also allege that Trump is ill-prepared for the upcoming summit, while Trump has repeatedly refuted such allegations.

The Putin-Trump meeting comes amid the months-long probes in the United States into allegations that Russia helped the Trump campaign in 2016. Moscow has repeatedly dismissed these claims, while Trump has denounced the probes as a "witch hunt."

Russian Adoptees' Deaths in the US

Steve King also told Sputnik that he would study report on deaths of 22 Russian adopted children in the United States and would probe into the incidents.

"A heavy discussion was on the adoption issue. They came very well prepared to respond and they said they had information that 61,000 Russian children have been adopted into the United States over a span of time. Out of those 61,000 adoptees, 22 allegedly have been killed. They had files and the pictures of those children and we don't have that information. That has my interest in. I am dedicated to go back and find out who those children are. I am sure that the Russian delegation will provide me with the files," King said.

READ MORE: 'Russia a Superpower, a Competitor, Not an Adversary' — US Senator in Moscow

He noted that he felt that there had been a growing concern in Russia about how Russian children were being treated in the United States.

"They said they were killed I said to them that these were likely accidents rather than brutalities. I will investigate these issues. These children are precious to everybody, we care and they care. We should not have been hiding anything either," he stressed.

On Saturday, King took part in a meeting between Russian and US lawmakers on the sidelines of the OSCE PA session in Berlin. During the meeting, among other issues, the Russian delegation reported on deaths of Russian adoptees in the United States. According to senior Russian lawmaker Leonid Slutsky, the delegation said that Moscow was ready to amend the law banning the adoption by US nationals only if Washington created a supervisory body in the area of child protection.

In late 2012, the Russian parliament approved legislation dubbed the Dima Yakovlev Law, which imposed a ban on the adoption of Russian children by US nationals, among other provisions. The law is named after a Russian toddler who died of heatstroke in 2008 after his adoptive US father left him in a car in the sun for nine hours.

'I Am Totally Prepared': Trump Expects to Have a Good Meeting With Putin