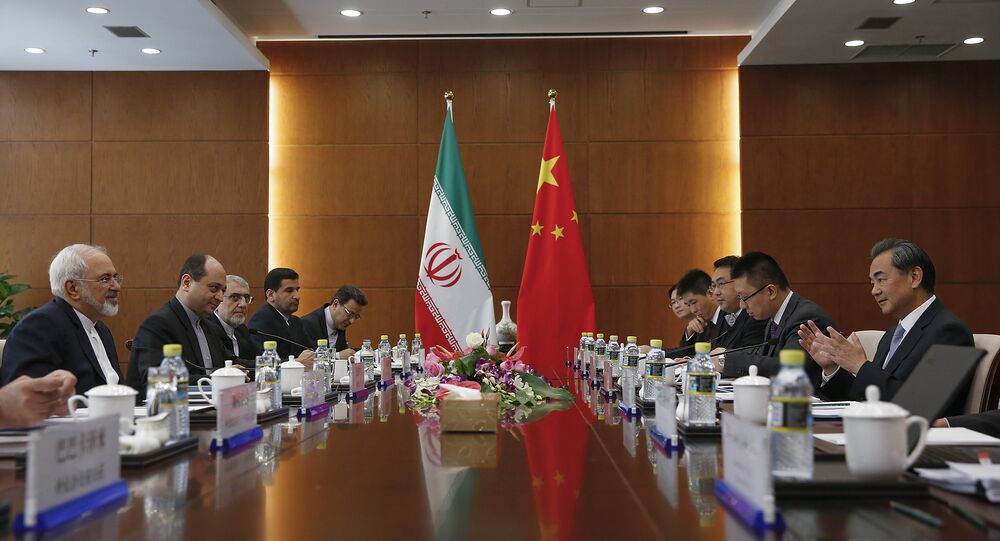 BEIJING (Sputnik) - Iranian Foreign Minister Mohammad Javad Zarif said at a meeting with his Chinese counterpart Wang Yi that Tehran decided to demonstrate responsibility remaining in the Iran nuclear deal after the US withdrawal from the agreement.

"After the United States took the decision to unilaterally pull out from the Iran nuclear deal, the Iranian party decided to remain in [the agreement], making a responsible decision," Zarif said, as quoted in the statement of the Chinese Foreign Ministry.

He also expressed hope that Friday's meeting of the JCPOA Joint Commission would send a strong message saying that the agreement's participants would make efforts not only to preserve the deal but also to protect the rights and interests of all the parties as it is stipulated by the agreement.

Zarif stressed that Iran attached great importance to China's positive role in the situation with the Iran nuclear issue.

"Tehran hopes that Beijing will continue to defend in an active way international rules and order in a new environment," the minister stated.

On Friday, the Meeting of the Joint Commission of the Joint Comprehensive Plan of Action (JCPOA) was held in the Austrian capital of Vienna. The participants in the JCPOA reiterated their commitment to continue the full and effective implementation of the agreement.

© REUTERS / Heinz-Peter Bader
Ex-US Envoy: Vienna Talks on Iran Sanctions May Escalate Global Trade War
The JCPOA was signed in 2015 by Iran, the European Union and the P5+1 group of countries — China, Germany, France, Russia, the United Kingdom and the US. The deal stipulated the gradual lifting of the anti-Iran sanctions in exchange for Tehran maintaining the peaceful nature of its nuclear program. The US President announced that his country would exit the deal last May, also reinstating the previously lifted sanctions on Iran, which faced a strong opposition from other signatories, committed to the agreement.

Discussing the Iranian deal in Vienna, the countries also went over a broader set of issues. According to the Chinese Foreign Ministry, Russian Foreign Minister Sergei Lavrov expressed Moscow's readiness to step up strategic communication and coordination with Beijing during a bilateral meeting with his Chinese counterpart Wang Yi on the sidelines of the Vienna talks.

"Russia is ready to foster strategic communication and coordination with China, deepen business cooperation and jointly defend goals and principles of the UN Charter, as well as norms of international law," Lavrov stated as quoted by the Chinese ministry.

Wang, in turn, also stressed the need for the two countries to actively build on "consensus reached by the two leaders during the state visit of Russian President Vladimir Putin to Beijing," promote bilateral cooperation in all areas, and "strengthen strategic cooperation of China and Russia in international affairs."

"Amid the complicated and volatile international environment, Russia and China must firmly stick to multilateralism, defend the existing world order and common interests of the two countries," Wang said.

Both ministers unanimously confirmed the need to continue adhering to the Iran nuclear deal in the light of the US withdrawal, also pledging that China and Russia would make joint efforts so that the Vienna ministerial meeting could "send a clear political signal and yield constructive results."

"With regard to the Iran nuclear issue, the two foreign ministers unanimously acknowledged the need to adhere to the Joint Comprehensive Plan of Action, defend international rules and legitimate interests of all countries," the joint statement said.

© AFP 2021 / HOW HWEE YOUNG
Russian Envoy to China Sees Ties Between the Two Countries Blooming
Russia and China maintain close bilateral contacts, with regular top-level meetings. Putin visited China in early June. As part of his trip, he held talks with his Chinese counterpart, during which the two leaders signed a joint declaration and a batch of bilateral documents. Xi Jinping, in turn, is expected to attend the Eastern Economic Forum in Russia's the Far East, scheduled to take place on September 11-13 in Vladivostok.
...
Reddit
Google+
Blogger
Pinterest
StumbleUpon
Telegram
WhatsApp
20