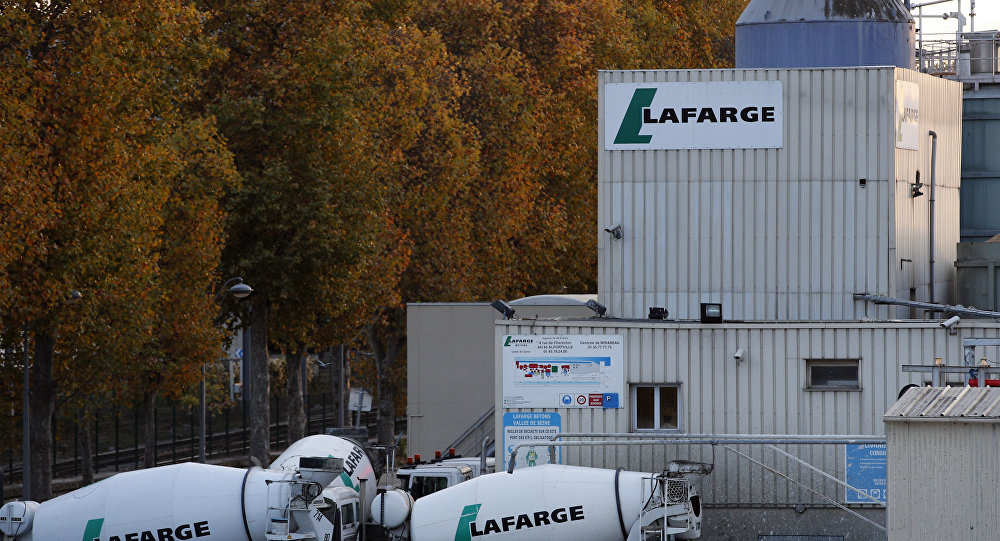 The French-Swiss multinational cement maker, LafargeHolcim, which has been under investigation since June 2016 for paying off Daesh in Syria, was handed preliminary charges on Thursday.

The French judges have charged the company with financing a terrorist organization in Syria, complicity in crimes against humanity, violating an embargo and endangering the lives of others.

Lafarge has admitted to having paid Syrian armed factions between 2013 and 2014 to guarantee safe passage for the plant's employees and its supplies in the war-ravaged country.

Three company officials were previously charged for their purported roles in the process, with the French media identifying them as two former plant officials and Lafarge's security chief.

The firm has been probed since the French newspaper Le Monde reported that between spring 2013 and September 2014 the Lafarge cement factory in north-eastern Syria indirectly funded Daesh*. The firm's board paid taxes to Daesh terrorists, who had gained control over neighboring towns and roads, to keep the plant in Jalabiya running during the war in Syria.

The media outlet also reported it had seen letters sent by the company’s managers in Syria “revealing arrangements that Lafarge made with the jihadist group to continue production until September 19, 2014” – the day when the plant halted all activity.

Furthermore, those letters allegedly proved that the cement maker’s Paris HQ was aware of the arrangements. Le Monde was also able to verify that a "pass stamped with a Daesh seal […] dated September 11, 2014” shows that the company had struck a deal with the group to allow the free movement and circulation of its goods. The newspaper further alleged Lafarge had bought oil from Daesh, indirectly, through middlemen and oil traders.

Once the allegations surfaced, Lafarge released a statement, clarifying that it'd been operating the factory in Jalabiya from 2010 to 2014. When the hostilities reached the area where the plant was located, the company tried to ensure the safety of its employees. The firm's press release further elaborated that in September 2014 the facility was shut down, the personnel evacuated, and received paid leave.

How Much Did it Pay?

The report submitted by the accounting firm PricewaterhouseCoopers (PwC) suggests that Lafarge paid some 12.9 million euros to a number of local factions in Syria, between July 2012 and September 2014.

The probe was opened in October 2016 after the French Ministry of Economy and Finance filed a complaint against Lafarge over suspicions that it had arrangements with a sanctioned militant group. The investigators were also interested in conditions, under which the plant was allowed to continue operating and freely moved its employees and goods on Daesh-controlled territory in Syria.

Subsequently, Sherpa, a French NGO, representing a dozen former Syrian employees, also filed a complaint against the cement manufacturer, claiming Lafarge made arrangements with Daesh to obtain passes and to purchase oil and other materials needed to make cement.

Several other human rights groups in France have also filed lawsuits against Lafarge, insisting that it is complicit in the war crimes committed by the self-proclaimed Islamic State if it paid off the group. In December 2017, human rights advocates claimed Lafarge paid some 13 million euros to armed groups, including Daesh, to keep running the plant in Syria.

© REUTERS / Thibault Camus
French-Swiss Company Admits Funding Militants in Syria
In 2016, the company commissioned its own investigation that “revealed that the local company provided funds to third parties to work out arrangements with a number of armed groups, which included sanctioned parties.”

In March 2017, the company admitted that it had funded militants to work out arrangements “in order to maintain operations and ensure the safe passage of employees and supplies to and from the plant.” Following the announcement, the company's CEO, Eric Olsen, who claimed that he was unaware of the payments, resigned, and has been placed under judicial investigation.