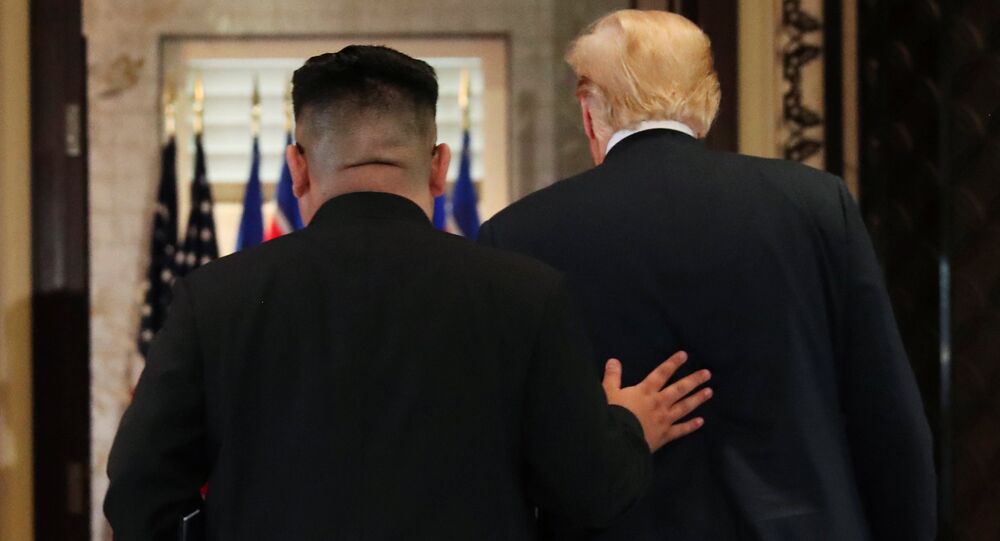 MOSCOW (Sputnik) - The first-ever summit of US President Donald Trump and North Korean leader Kim Jong-un has concluded with an agreement in which Pyongyang reaffirmed its commitment to the denuclearization of the Korean peninsula, while the United States pledged to provide security guarantees.

The final document is made up of only four points: the agreement to establish new bilateral relations, decision to join efforts to "build a lasting and stable peace regime on the Korean peninsula," Pyongyang's confirmed commitment to denuclearization, and the repatriation of the remains of the US military personnel, either prisoners of war or missing in action after the 1950-1953 war.

In response to Kim's confirmation of denuclearization intentions, Trump has promised to provide security guarantees to Pyongyang.

However, the document does not mention Washington's determination to achieve a complete, verifiable, irreversible denuclearization.

The two sides have agreed that a follow-up meeting would be attended by US Secretary of State Mike Pompeo and a relevant official from North Korea.

The first-ever summit of Trump and Kim took place in Singapore at the Capella Hotel on the island of Sentosa south of the main island. Trump said after the talks that the denuclearization process would begin soon, while Kim said the signing of the agreement signified a new beginning in the bilateral relations and promised "a major change" in the future.

© REUTERS / Kevin Lim/The Straits Times
World 'One Step Closer' to Peace on Korean Peninsula - US Vice President
Despite a promising start of negotiations, the United States will not diminish its military presence in South Korea, Trump said at a press conference held later in the day.

At the same time, the United States will suspend military exercises on the Korean peninsula as long as the talks with North Korea are progressing, Trump said. The US president noted that the suspension would help Washington save "a tremendous amount of money."

Trump added that the sanctions against North Korea would remain in place as long as nuclear weapons remain in the picture. nevertheless, Trump said that, as a concession to Pyongyang, he had halted plans for 300 new sanctions.

North Korea's neighbors have welcomed the potential progress in the resolution of the crisis.

Russia is not only welcoming the potential progress but is ready to provide assistance in the form of political support or specific proposals, Russian Deputy Foreign Minister Sergey Ryabkov told Sputnik.

Ryabkov expressed hope that the movement forward on the Korean issue would unblock the possibility for economic cooperation on the Korean peninsula.

Russian Foreign Minister Sergey Lavrov said that the very fact of the meeting was possible, but noted that the Russian side has not seen any documents yet.

China, in turn, said that the results of the Trump-Kim meeting were an important step toward denuclearization and lasting peace on the peninsula.

Japanese Chief Cabinet Secretary Yoshihide Suga has refrained from an assessment of the summit but expressed hope that North Korea would change its policy in the future.

© AFP 2021 / Saul Loeb
Historic Kim-Trump Summit Highlights: Handshakes, Body Language, 'Major Changes'
The Japanese official stressed that Tokyo appreciated the efforts made by Trump, but would like to learn about the details of the summit from the US side.

US Foreign Minister Taro Kono has said that the full dismantlement of nuclear facilities in North Korea may take decades, but the destruction of nuclear weapons and relevant facilities would not take long.

South Korean presidential adviser Moon Jung-in has expressed a similar opinion in an interview to the Nikkei newspaper, arguing that the settlement of all issues related to North Korean missile and nuclear programs as well as the dismantlement of relevant facilities would take a decade.

According to Moon, North Korea may demand political, economic and military guarantees in exchange for denuclearization.

The Trump-Kim joint statement is a clear sign that the complete denuclearization of the Korean peninsula is achievable, EU foreign policy chief Federica Mogherini said.

"The ultimate goal, shared by the entire international community and as expressed by the United Nations Security Council, remains the complete, verifiable and irreversible denuclearization of the Korean Peninsula. The Joint Statement signed by the U.S. and DPRK leaders today gives a clear signal that this goal can be achieved," Mogherini said in a statement.

UK Foreign Secretary Boris Johnson welcomed the results of the summit and called the talks between Trump and Kim "constructive."