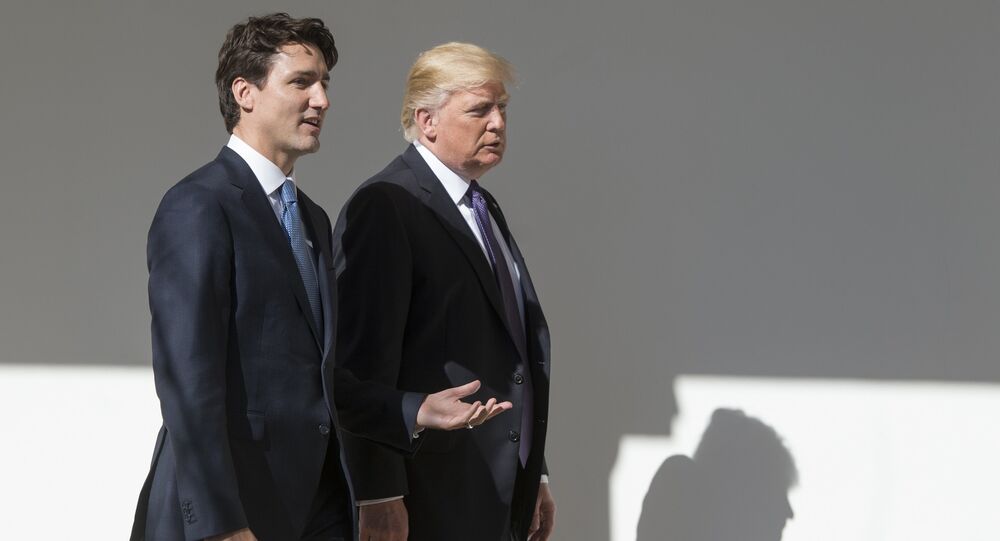 Soon after Trump left the G7 summit he tweeted that he had instructed the House of Representatives not to endorse the final communique of the G7 summit due to Trudeau's "false statements at his news conference," as the Canadian prime minister dismissed US metal tariffs as "insulting" and announced retaliatory measures.

Donald Trump's tirade against Canadian Prime Minister Justin Trudeau's statement after the G7 summit may not have been related to Ottawa's stance on US tariffs on steel and aluminum, Canadian based media The Star reported. According to the outlet, G7 members had significant difficulties in reaching the agreement on a final statement.

There were two crucial points that didn't satisfy the US delegation, the Canadian media points out. The first one, regarding global trade, suggested the endorsement of a "the rules-based global system." In the course of discussion, a compromise was reached, with the final wording speaking about commitment to "modernize the WTO to make it more fair as soon as possible." At the same time, the media suggests that by the next day "the consensus had unraveled."

Another stumbling block was the part regarding climate change, where the US didn't want to see any reference to the Paris Agreement, from which the Trump administration has withdrawn, The Star reported. Nor did the US administration want to sign a charter regarding plastic in the ocean.

In the end, Trump never visited the sessions on climate or the ocean, but held its own news conference, where he slammed "unfair trade" and promised to cut ties with countries that didn't adhere to a "zero tariffs," policy, then leaving for a summit in Singapore.

Two points of the joint communique formulated by the G7 members were not negotiated with the US president, but that didn't prevent the Canadian prime minister from announcing that all member-states had reached common ground on the final statement.

Following Trudeau's statement during the news conference, Trump posted two tweets slamming his words as "false" and accused the Canadian prime minister of being dishonest. Still, numerous Canadian officials, including Trudeau's spokesperson, noted that he said nothing new or anything that hadn't been discussed with Trump in private.

In a press conference, Justin Trudeau slammed the harsh tariffs on steel and aluminum imposed by the US against numerous countries, including its allies. The prime minister said that calling Canadian steel and aluminum exports a national security threat to the US is "kind of insulting."