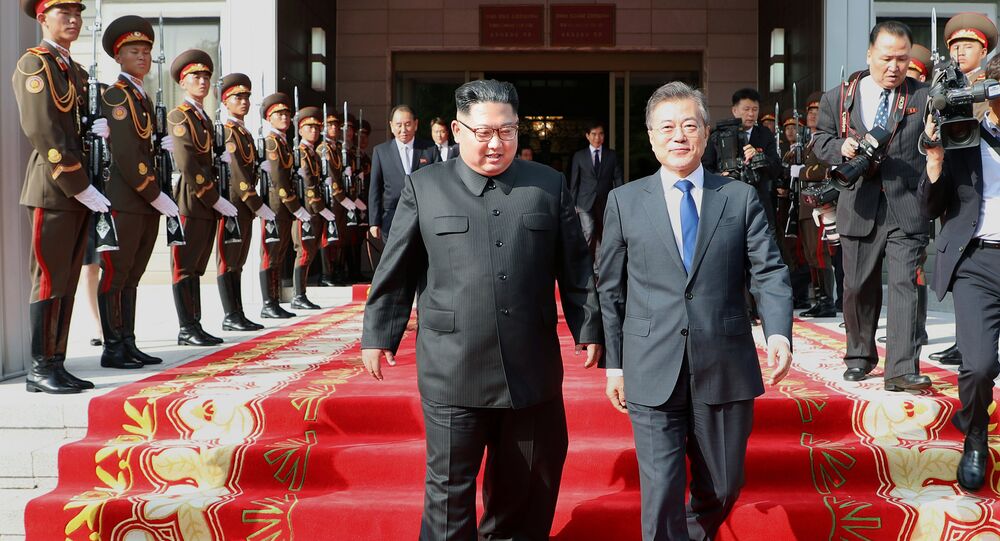 MOSCOW (Sputnik) - South Korean President Moon Jae-in believes it is necessary to establish Pyongyang's parallel dialogue with Seoul and Washington in order to start a process, that might require a few years of negotiations, the South Korean presidential office said in a statement on Monday.

"The long-standing hostile relations and the North Korean nuclear problem cannot be abandoned after only one attempted negotiations between the two leaders. For further comprehensive settlement, whose beginning was marked by the two leaders, a lengthy process is required. We cannot know whether it will last for a year, two, or longer," Moon indicated.

He also stated that it is necessary to establish a "chain reaction" in order to solve the Korean issues.

© AP Photo / Joseph Nair
Singaporean, North Korean Top Diplomats Hold Meeting Ahead of Trump-Kim Summit
Donald Trump and Kim Jong-un both arrived on the long-awaited summit in Singapore, which would take place on June 12. It will mark the first-ever meeting of sitting leaders of the two countries. Previously, Trump said that if the Singapore parley is a success, he would invite Kim Jong-un to the White House. According to the South Korean Chosun Ilbo newspaper, Kim also invited Trump to Pyongyang for the second round of summit in July.
...
Reddit
Google+
Blogger
Pinterest
StumbleUpon
Telegram
WhatsApp
12