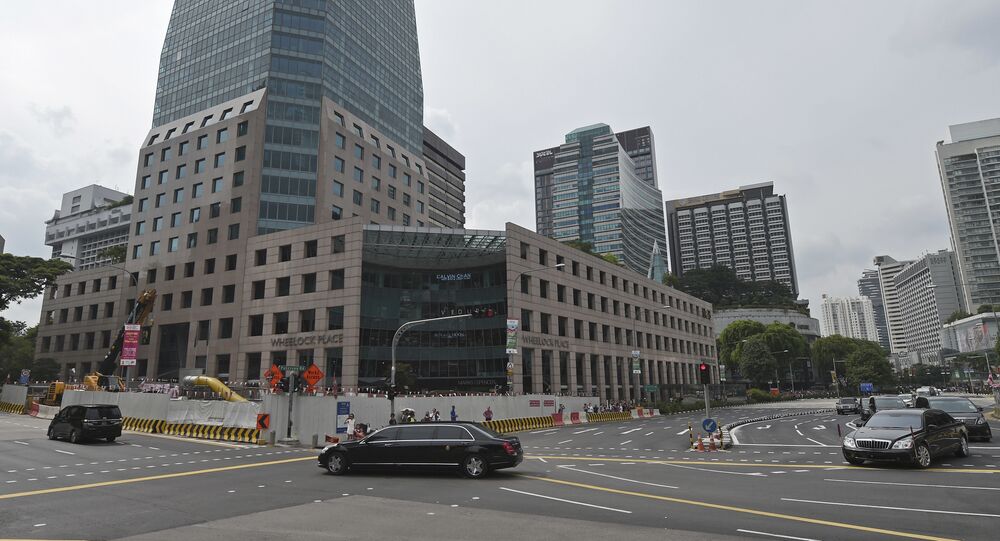 MOSCOW (Sputnik) – Singaporean Foreign Minister Vivian Balakrishnan said on Monday that he met with his North Korean counterpart Ri Yong Ho ahead of the high-level summit between Pyongyang and Washington.

"Happy to see FM Ri again for a quick meeting here in MFA, just four days after he kindly hosted me in Pyongyang!" Balakrishnan wrote on Facebook.

The Singaporean foreign minister also published photos depicting him and Ri greeting each other and shaking each other’s hands.

Earlier in the day, US President Donald Trump and Singaporean Prime Minister Lee Hsien Long met privately at the Istana, the prime minister's office, and residence, for one-on-one talks ahead of the upcoming summit

Balakrishnan finished his first trip to Pyongyang on Saturday. After the visit, the diplomat praised the welcoming atmosphere and friendly talks with Ri and President of the Presidium of North Korea's Supreme People's Assembly Kim Yong Nam.

© AP Photo / Joseph Nair
Trump-Kim Summit Agenda: Firm Peace, Korean Denuclearization - Reports
This week, Singapore hosts the first-ever bilateral talks between North Korea and the United States. The historic meeting between US President Donald Trump and North Korean leader Kim Jong-un, during which the two counterparts are expected to discuss the establishment of diplomatic ties and North Korea’s denuclearization, will be held at the Capella Hotel on Singapore's Sentosa Island on Tuesday.

Both Trump and Kim arrived in Singapore on Sunday. The two leaders met with Balakrishnan upon their arrival.