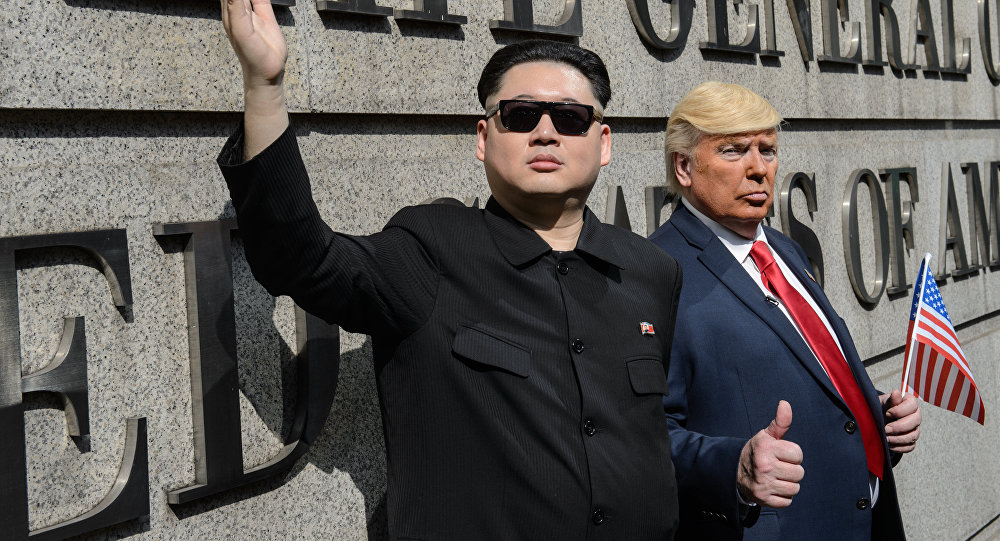 "We appreciate everything what is going on. We appreciate working together with North Korea. They are really working very well with us," Trump told reporters at a press conference in Quebec, adding that he was looking forward for the meeting.

Trump further noted that his upcoming meeting with Kim Jong-un in Singapore as a "mission of peace."

"This is unknown territory in the truest sense. But I feel really confident," Trump told reporters. "It's never been done, It's never been tested. So we are going in with a really positive spirit."

At the same time, the US president thinks that Kim Jong-un can make North Korea great. Trump noted that he would know "within a minute" whether Kim was serious about giving up weapons.

"I think within the first minute I'll know. Just my touch, my feel. That's what I do," Trump told reporters at a news conference at the G7 summit in Quebec. "And if I think it won't happen — I'm not going to waste my time. I don't want to waste his time."

The highly-anticipated meeting between Trump and North Korean leader Kim Kim Jong Un is scheduled for next Tuesday.

On G7 Summit in Quebec

The Group of Seven (G7) countries have held a "tremendously successful" summit, and discussed a number of issues, including unfair trade practices, migration and Iran’s nuclear ambitions, US President Donald Trump said.

"I think it has been very, very successful. We have concluded a really tremendously successful G7," Trump told reporters.

The president stressed that the issue of trade was "at the top of the list," while he made clear to his partners that the United States was determined to tackle the issue of unfair foreign trading practices, such as high tariffs and subsidies.

"I made a lot of statements having to do with clarity. We want and expect other nations to provide fair market access to American exports, and we will take whatever steps necessary to protect American industry and workers from unfair foreign trading practices," he said.

The discussions also touched upon the issue of "uncontrolled migration." Trump pointed to the need to help people to prosper in their home countries as a way out.

© REUTERS / Yves Herman
'G7 Summit is Being Used to Advance Another Russophobic Hysterical Plan' - Author
"We also discussed the issue of uncontrolled migration and the threat it poses to both national security and … quality of life. We are committed to addressing migration challenges by helping migrants to remain and prosper in their own home countries," he pointed out.

He also noted that the G7 nations had discussed the situation around Iran, and committed themselves to controlling the country’s nuclear ambitions.

"The G7 nations remain committed to controlling Iran’s nuclear ambitions. With or without them, those ambitions are going to be controlled," he stressed.

Trump is the first one to leave the gathering in Quebec as he is heading to Singapore for the June 12 meeting with North Korean Leader Kim Jong-un.

In the run-up to the G7 summit, US relations with the most of the remaining G7 countries have deteriorated, since Washington removed an exemption on 25 percent tariffs for steel and 10 percent for aluminum from Canada, Mexico, and the European Union, which prompted the bloc and Canada to roll out retaliatory measures.

Media reported that the G7 nations might fail to adopt a joint statement following the summit amid strong trade disagreements.