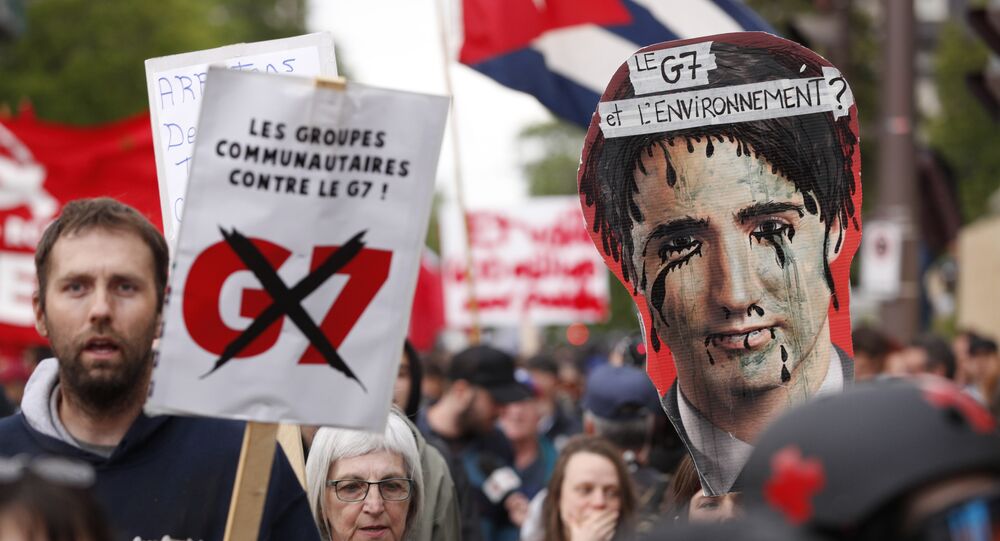 The Group of Seven summit in La Malbaie, Quebec, already fraught with political pressure amid trade disagreements between the US and its Canadian and European allies, has prompted thousands of demonstrators to stage protests against the high-level meetings.

The mostly peaceful demonstrations in Quebec City on Thursday saw thousands of protesters took to the streets, with a heavy police presence deployed in the area ahead of the summit.

Twitter users posted pics appearing to show some of the police carrying assault rifles, with many in riot gear.

Shanipiap is one of the Innu activists here at a an anti #G72018 march in Quebec City. In her speech she condemns the participation of Huron-Wendat and Innu Chiefs, who will participating in the welcoming of G7 leaders tomorrow in La Malbaie, Qc ⁦@APTNNews⁩ pic.twitter.com/S1MWscdq6n

Police made at least two arrests. A CBC reporter said the suspects are accused of possessing explosive substances.

Police arrested one protester during a G7 demonstration. Protestors are marching toward Quebec City’s convention center. So far the protest has remained peaceful #G7summit# pic.twitter.com/GPcFMBifaJ

All in all, Thursday's protests were mostly peaceful, but local stores have barricaded windows and closed early, just in case Friday's protests become violent.

This year's G7 meeting is fraught with political turmoil amid trade disagreements between the US and its Canadian and European partners. On Thursday, French President Emmanuel Macron tweeted about President Trump's "isolation" and said the other members of the Group of Seven would be ready to sign a six-country agreement "if need be."

The American President may not mind being isolated, but neither do we mind signing a 6 country agreement if need be. Because these 6 countries represent values, they represent an economic market which has the weight of history behind it and which is now a true international force https://t.co/UA86fcjozs

Why isn’t the European Union and Canada informing the public that for years they have used massive Trade Tariffs and non-monetary Trade Barriers against the U.S. Totally unfair to our farmers, workers & companies. Take down your tariffs & barriers or we will more than match you!

Please tell Prime Minister Trudeau and President Macron that they are charging the U.S. massive tariffs and create non-monetary barriers. The EU trade surplus with the U.S. is $151 Billion, and Canada keeps our farmers and others out. Look forward to seeing them tomorrow.

Prime Minister Trudeau is being so indignant, bringing up the relationship that the U.S. and Canada had over the many years and all sorts of other things…but he doesn’t bring up the fact that they charge us up to 300% on dairy — hurting our Farmers, killing our Agriculture!

The summit will officially kick off on Friday in the provincial Quebec town of La Malbaie and run until Saturday. President Trump is expected to leave the summit early to fly to Singapore, skipping the climate session, and reportedly declining a one-on-one meeting with British Prime Minister Theresa May.