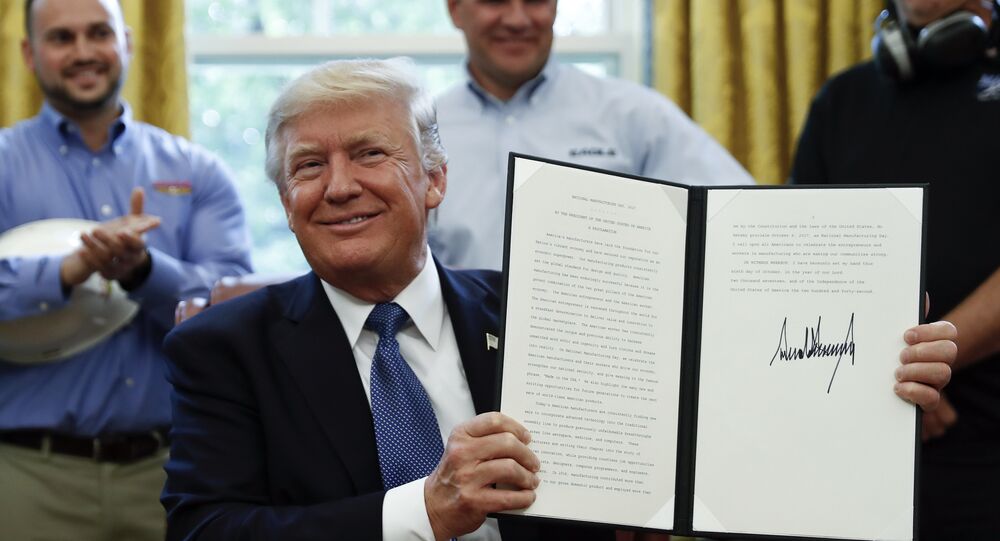 MOSCOW (Sputnik) - European Council President Donald Tusk said that while US President Donald Trump’s recent decisions to go back on several international deals might simply represent temporary frictions in the West’s relations, they could also be indicators of the country's new strategy and mark the beginning of the trans-Atlantic breakup.

"The crucial question today is whether these decisions are only incidental changes to current American policy (to which, of course, every president is entitled) or the beginning of a new strategic trend. Simply put: Are they merely seasonal turbulences or rather the first symptoms of the breakup of the Western political community, which the G-7 represents and informally leads?" Tusk said in his op-ed in The New York Times.

European Council President Donald Tusk emphasized that Trump’s decisions had made Europe realize that it was necessary "to protect the trans-Atlantic bond" despite the recent tensions, noting that Brussels should at the same time be ready to act on its own.

Later this week, the Group of Seven (G7) will meet in the Canadian province of Quebec.

© REUTERS / Fabian Bimmer
G7 Vows to Fight US Steel, Aluminum Tariffs
However, the upcoming summit is overshadowed by the disputes between the United States and other G7 members over recently introduced US steel and aluminum tariffs, and Washington’s withdrawal from the Paris Agreement and Iran nuclear deal.

Trans-Atlantic relations have worsened in the wake of Trump’s decision to withdraw from several international commitments which had been reached as a result of intense international efforts and diplomatic negotiations.

In 2017, the United States, one of the world's biggest producers of carbon dioxide, left the Paris Agreement on climate change, hammered out under the previous administration. The Paris accord was signed in December 2015 and went into force in November 2016.

The deal, which aims to slow the pace of global warming, has been ratified by 176 out of the 197 parties to the convention. US President Donald Trump has repeatedly expressed skepticism about climate change, calling global warming a "myth" and a "hoax" that benefits China.

© AFP 2020 / TOBIAS SCHWARZ
'We Need Russia to Solve Problems': Germany’s Left Party Co-Leader Wants Moscow Back in G7
In May this year, Trump announced his decision to withdraw from the Joint Comprehensive Plan of Action (JCPOA), which requires Tehran to maintain a peaceful nuclear program in exchange for sanctions relief. Trump's decision was largely criticized by other parties to the JCPOA.

The two-day G7 summit will start in Canada’s Charlevoix region on Friday, bringing together leaders of Canada, France, Germany, Italy, Japan, the United Kingdom and the United States.