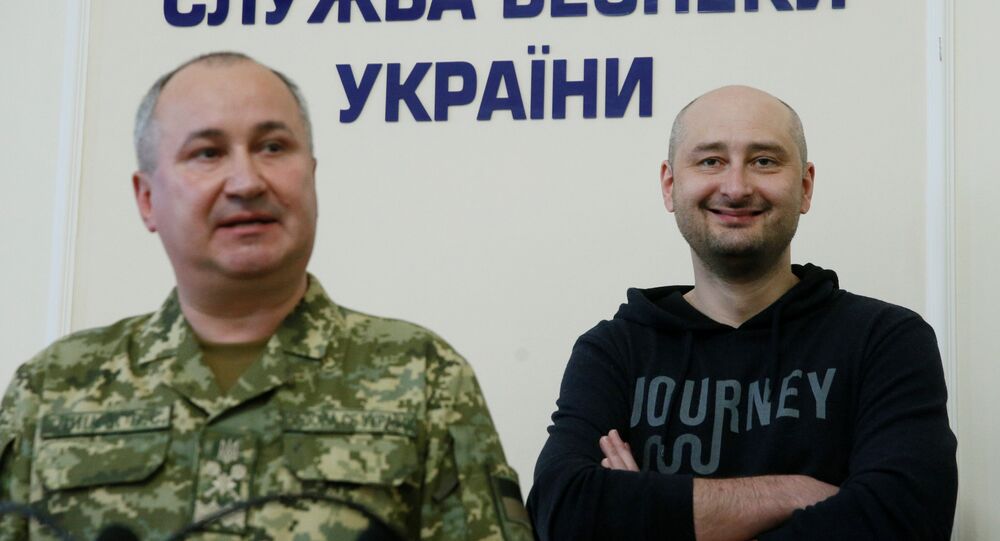 KIEV (Sputnik) - The Ukrainian Security Service (SBU) said Wednesday that it had launched a criminal investigation after Ukrainian media published a list of individuals who allegedly were set to become next victims of masterminds behind the attempted murder of Russian journalist Arkady Babchenko.

"The employees of the Ukrainian SBU's main investigation department launched a criminal probe into the [news portal's] disclosure of pretrial investigation materials," the SBU's press service said in a statement, adding that no one was given permission to disclose this information.

On Friday, Ukraine's Prosecutor General Yuriy Lutsenko said that the country's law enforcement officials had a list of 47 individuals, most of whom were journalists, who were to be targeted next. On Tuesday, the Ukrainian Strana.ua online news portal published the list, citing SBU sources.

© Sputnik / Alexander Maximenko
The Unusual Suspect: What is Known of Babchenko's 'Fake Murderer'
On May 29, Babchenko, who moved to Ukraine in 2017, was reportedly shot dead near his apartment in Kiev but showed up next day at a press conference hosted by SBU chief Vasyl Hrytsak. The SBU head then claimed that 30 more individuals, apart from Babchenko, were on a "hit list." On May 31, a Ukrainian court arrested Borys Herman, a suspected organizer of the alleged plot to murder Babchenko, for two months.

READ MORE: Arkady Babchenko: How Much Else Has Been Faked?

After realizing that Babchenko was alive, Maria Zakharova, the spokeswoman for the Russian Foreign Ministry, welcomed the news but noted that the story was being used for a propaganda effect.