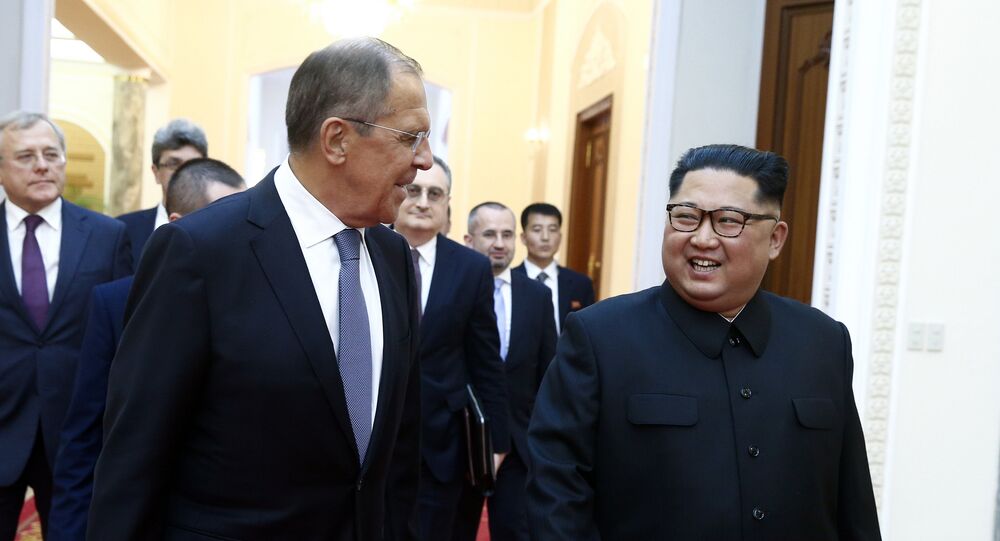 Russian Foreign Minister Sergei Lavrov has met with North Korean leader Kim Jong-un to discuss the situation on the Korean peninsula, while the fate of the US-DPRK talks, which had been initially scheduled to take place in June in Singapore, has been in limbo.

"We are interested in peace, stability and prosperity on the Korean peninsula and in Northeast Asia as a whole," Lavrov said at the beginning of the talks.

"We and our President have very positively assessed the Panmunjom Declaration, which you and the President of the Republic of Korea signed. We are ready to contribute to its implementation in every possible way, given that it mentions railway projects which should be implemented with Russia's participation in the long term," Lavrov said at a meeting with North Korean leader Kim Jong Un, as quoted by the Russian Foreign Ministry.

Sergei Lavrov on Thursday invited North Korean leader Kim Jong Un to visit Russia, noting that Moscow would be happy to welcome him.

"Come to Russia, we will be happy to see you," Lavrov said, as quoted by the Russian Foreign Ministry.

"I appreciate that [Russian President Vladimir] Putin's office is opposed to US dominance. We are always ready to hold talks with Russia to align [ourselves] on this issue," Kim said at a meeting with Russian Foreign Minister Sergey Lavrov in Pyongyang.

The North Korean leader noted that Lavrov's visit came at a moment when "the situation on the Korean Peninsula is moving toward the negotiating table."

The Russian top diplomat is visiting Pyongyang to discuss bilateral issues and the situation on the Korean peninsula. Earlier in the day, he held a meeting with his North Korean counterpart Ri Yong Ho.

Pyongyang has recently been in the center of diplomacy on the Korean Peninsula. Over the past months, Kim held several bilaterals with his South Korean counterpart Moon Jae-in. The North Korean leader's meeting with US President Donald Trump is expected to take place in Singapore on June 12.