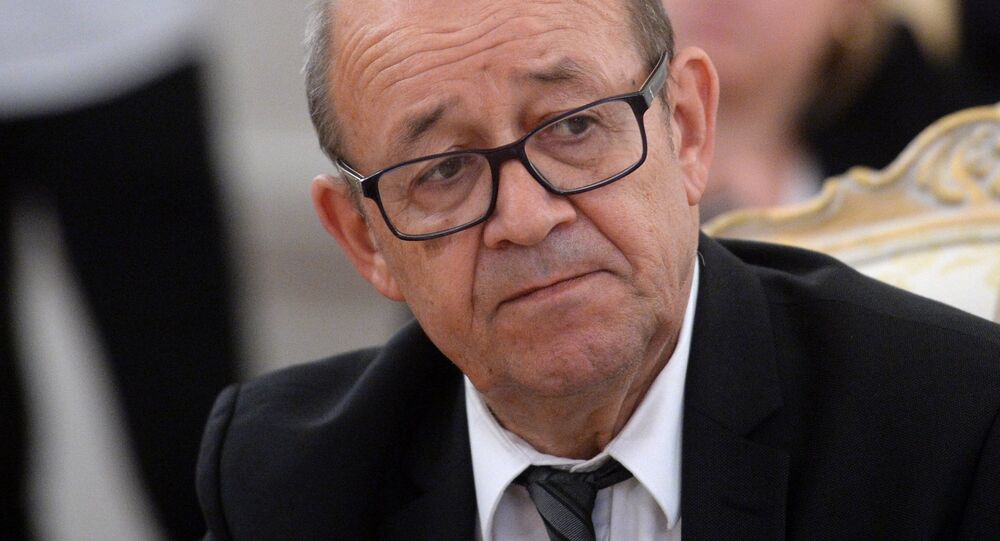 PARIS (Sputnik) - The introduction of new anti-Tehran sanctions by Washington will not contribute to a dialogue, but will create new risks for security in the region, French Foreign Minister Jean-Yves Le Drian said on Wednesday.

"We consider that all the anti-Iranian sanctions will not contribute a dialogue. Vice versa, it will contribute to strengthening of the positions of conservators in Iran, it will weaken [Iranian President Hassan] Rouhani, who wanted to be engaged in a dialogue… Finally, this [US] position could result in additional risks in the region," Le Drian told the France Inter radio broadcaster.

The diplomat added that Europe opposed the US sanctions and would create a mechanism to bypass the restrictions imposed by Washington.

"We, the Europeans, are completely against these measures; these are the measures we call extraterritorial … We are not just protesting. Firstly, we demanded that those enterprises, which have been investing in Iran since the Vienna agreement, could continue their investment legally. Furthermore, we decided to implement a mechanism which will allow us to ensure that the European enterprises deal with Iran via financial mechanisms that allows immunizing investment without being dependent on US dollar or on sanctions adopted by the US," the minister said.

© REUTERS / Philippe Wojazer
Putin, Macron Discuss Situation Around US Unilateral Withdrawal From JCPOA – Kremlin
On May 8, US President Donald Trump announced his decision to withdraw from the 2015 Iran nuclear deal. The accord stipulates that Iran must maintain a peaceful nature of its nuclear program in exchange for sanctions relief. Trump also announced that he would reinstate US sanctions related to Iran’s nuclear program.

Commenting on Trump's move Rouhani said that Tehran was not going to withdraw from the JCPOA, and that the agreement remained between Iran and the remaining participants of the deal. He noted that, unlike Iran, the United States never fulfilled its obligations under the nuclear deal.

READ MORE: Russia Hopes US Withdrawal From JCPOA Not Linked to Plans to Attack Iran — Lavrov

On July 14, 2015, the European Union and the P5+1 group of countries — China, Germany, France, Russia, the United Kingdom and the United States — signed the Joint Comprehensive Plan of Action (JCPOA), also known as the Iranian nuclear deal, with Tehran.

France and Russia have differences as well as common interests that is why the two states could work out a common position on various issues through a direct, but at the same time demanding dialogue, French Foreign Minister Jean-Yves Le Drian said on Wednesday.

On Thursday, French President Emmanuel Macron will start a two-day visit to Russia. During the visit he will attend the St. Petersburg Economic Forum (SPIEF) and will hold talks with Russian President Vladimir Putin.

“We have a lot of divergences, that would be a subject of discussion between Macron and Putin… We need an honest, demanding dialogue with Russia; we have our interests. Russia is a big country, Russia can be a partner. We need to move toward a dialogue. We can work out a common position on a range of questions without hiding our key differences at the same time," Le Drian told the France Inter radio broadcaster.

© Sputnik / Alexander Galperin
Foreign Investors to Discuss Failure of Sanctions With Putin at SPIEF - RDIF
In 2014, relations between Russia and the West, including France, deteriorated over Moscow's alleged involvement in the Ukraine conflict and Crimea's reunification with Russia. The European Union, the United States and their allies imposed several rounds of sanctions on Russia's energy, banking, and defense sectors, among others, as well as on a number of Russian officials.

SPIEF, held annually in Russia's second largest city of St. Petersburg, is a major global platform for communication between business representatives and the discussion of crucial economic issues. The upcoming event will start on Thursday and will continue until Saturday. Rossiya Segodnya International Information Agency is the official media partner of the forum.

Ex-Pentagon Adviser: Iraqi Citizens Voted for Independence From US, Iran