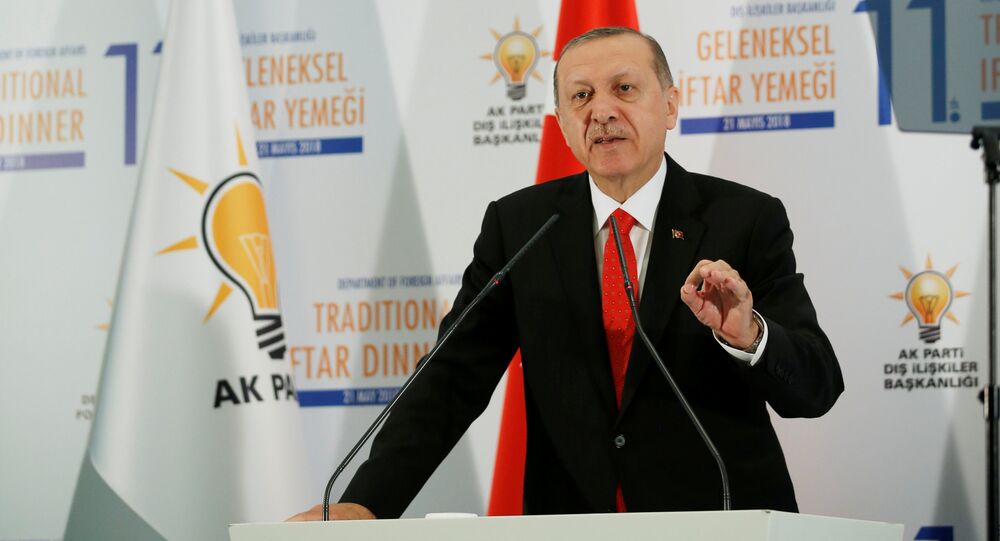 Erdogan: Those Who Possess 15,000 Nukes Are Now Threatening the World

Turkish President Recep Tayyip Erdogan has argued that those countries with nuclear weapons calling nuclear power plants a threat do not trust the world community.

Speaking at an Iftar dinner for the Muslim holy month of Ramadan, Turkish President Recep Tayyip Erdogan specifically focused on the issue of nuclear proliferation.

"Those who have more than 15,000 nuclear warheads are currently threatening the world," he pointed out.

According to him, "the countries with nuclear weapons, that portray nuclear power stations as threats, have no credibility in the international community."

Touching upon the Joint Comprehensive Plan of Action (JCPOA), also known as the Iran nuclear deal, Erdogan said Ankara does not "accept re-igniting issues" and that the deal has been "put to bed."

"We find the other signatories stating their loyalty to the agreement in the face of the US administration's decision very positive," he underscored.

US Secretary of State Mike Pompeo, earlier this week warned that the "sting of sanctions" will not ease until Iran changes its course, saying that the new sanctions against Tehran will be the "strongest in history."

On May 8, US President Donald Trump announced his decision to withdraw the United States from the Iran nuclear deal, also known as the Joint Comprehensive Plan of Action (JCPOA). He also promised to reinstate the sanctions against Iran that were lifted as a result of the agreement.

The European Union and the P5+1 group of countries, including China, Germany, France, Russia, the UK and the US, signed the JCPOA with Iran on June 14, 2015. Shortly after, the Turkish Foreign Ministry hailed the P5+1 clinching the deal, expressing hope that it "will bring peace, security and stability to the region."