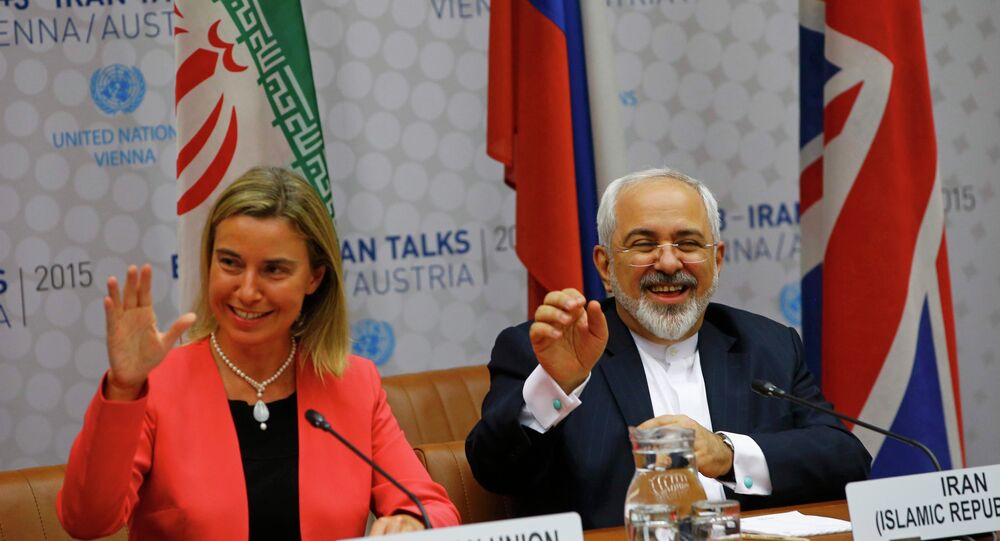 US Secretary of State Mike Pompeo's promise to slap the "strongest sanctions in history" on Tehran after Washington's withdrawal from the Iran nuclear deal has prompted an outcry from European officials.

The EU's foreign policy Chief Federica Mogherini, commenting on the possible unprecedented sanctions against Iran pledged by US Secretary of State Mike Pompeo, has warned that there is "no alternative" to the Joint Comprehensive Plan of Action, also known as the Iran nuclear deal.

"Secretary Pompeo's speech has not demonstrated how walking away from the JCPOA has made or will make the region safer from the threat of nuclear proliferation or how it puts us in a better position to influence Iran's conduct in areas outside the scope of JCPOA," Mogherini stressed.

She recalled that the Iran nuclear deal is "the result of more than a decade of complex and delicate negotiations", touting the JCPOA as "the best possible outcome, striking the right balance."

READ MORE: Peace With a Price: Iran Promises EU to Adhere to Nuke Deal on One Condition

She also underscored Iran's adherence to the JCPOA, reiterating that the International Atomic Energy Agency confirmed ten times that Iran had delivered on "all its nuclear related commitments" in line with the deal.

According to the Chinese Foreign Ministry, UK Foreign Secretary Boris Johnson said during a meeting with his Chinese counterpart on the sidelines of the G20 foreign ministers' summit in Argentina that the exit from the Iran nuclear deal would be a catastrophe.

While Johnson was quoted by Beijing as saying that the "sides should make efforts in order to let the deal live, the Chinese forein minister emphasized his country's firm stance on the issue and affirmed readiness to work with all interested parties.

"If you try now to fold all those issues — the ballistic missiles, Iran's misbehavior, Iran's disruptive activity in the region and the nuclear question — if you try to fold all those into a giant negotiation, I don't see that being very easy to achieve, in anything like a reasonable timetable," Johnson said.

He warned that after Washington's exit from the Iran nuclear deal, "the prospect of a new jumbo Iran treaty is going to be very, very difficult."

At the same time, he noted he is "not totally pessimistic about the situation."

"In the end, there is a deal to be done that gives Iran a greater economic access to the West, but also constrains it. […] I think in the end, we will get back to the kind of additions to the JCPOA that we initially envisaged, but it may take a long time," Johnson underlined.

German Foreign Minister Heiko Maas, for his part, said that Berlin had "taken into account the US position" and that "it did not come as surprise."

He recalled that during his visit to Washington later this week, he will meet with Pompeo to discuss the issue.

"The situation has not changed for us. During its summit in Sofia, the EU gave a unified signal that we want to keep the Iran nuclear deal," Maas pointed out.

He warned that "without this agreement we could run the risk that Iran could restart a nuclear program."

The Iranian Foreign Ministry has in turn used stern language when commenting on Pompeo's speech.

"Iran rejects the allegations and lies in this so-called new strategy and condemns the US Secretary of State's […] open interference in its internal affairs and the unlawful threats against a United Nations member state," the Ministry said in a statement.

The statement described Pompeo's remarks as a "naïve attempt" to divert the international community's attention away from Washington's violation of the JCPOA.

According to the statement, "the US government will be responsible for the consequences of any persecution as well as unlawful and violent actions against the Iranian nation."

"The insignificant, insulting and secondary remarks of the new US Secretary of State and his unacceptable attitude to the great and civilized Iranian nation testify to the US government officials' despair and helpless stance on the Iranians," the statement read.

In his speech "After the Deal: A New Iran Strategy" at the Heritage Foundation in Washington, Pompeo pledged that the US would apply unprecedented financial pressure on Tehran via sanctions.

READ MORE: Why European Signatories Are Not Ready to Exit From Iran Deal

© Sputnik / Valeriy Melnikov
Iran Wants Guarantees From EU That JCPOA Would Be Beneficial for It - Zarif
He warned that any entity conducting business with Tehran would be "held to account" by the US, voicing hope that the new anti-Iranian sanctions will be met with support from US allies beyond Europe.

In early May President Donald Trump announced the US withdrawal from the Iran nuclear deal, in a move that sparked a cold snap in Washington's ties with its European allies and co-signatories to the deal, including the European Union, Germany, France, the United Kingdom, Iran, Russia, and China.