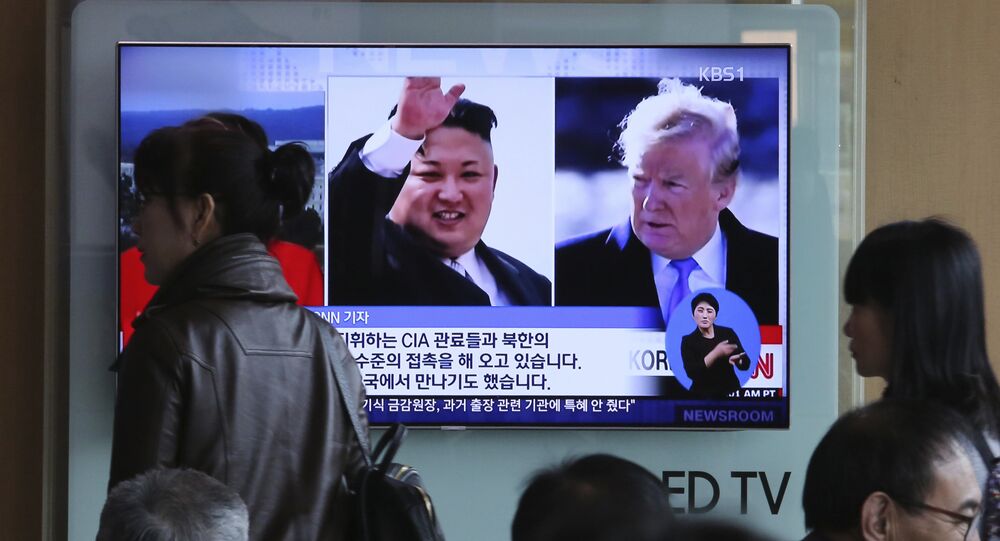 Ahead of next month's summit with North Korean chief Kim Jong-un in Singapore, US President Donald Trump is concerned about the possibility of the meeting turning into a “political embarrassment,” and has begun asking his aides if he should go out on a limb and proceed with the talks, The New York Times has reported.

According to the NYT, citing administration officials, the president was both surprised and angered by North Korea's backing out of its initial assurances, as Pyongyang’s top nuclear negotiator stated that the country would never “trade away its nuclear weapons capability in exchange for economic aid.”

READ MORE: N Korea Suspends Talks With South Over Their Joint Drills With US — Reports

Trump reportedly approached his aides on Thursday and Friday, asking if it was wise to hold the meeting with his North Korean counterpart, and on Saturday night he reached South Korea's President Moon Jae-in to learn why Pyongyang's recent statement seemed to be at odds with the private assurances that Moon had given after the historic inter-Korean summit last month.

© AP Photo / Ahn Young-joon
US to Avoid 'Libya Model' for DPRK Denuclearization, Kim Won't be Ousted - Trump
The US president's aides have reportedly been increasingly anxious about Trump having appeared to be too eager to hold the summit meeting, the NYT noted. The advisers also worry that Kim could take advantage of that eagerness to offer promises and assurances that could be broken over time.

According to the media outlet, Trump’s decision to withdraw from the Joint Comprehensive Plan of Action (JCPOA), also known as the 2015 Iran nuclear deal, has raised the stakes for the North Korea talks.

“If he emerges with anything less than what President Barack Obama got, which in Iran included the verified shipment of 97 percent of all nuclear material out of the country, it will be hard for Mr. Trump to convince anyone other than his base that the negotiation was a success,” The New York Times suggested.

The newspaper said that Trump’s national security adviser John Bolton had advised the president to use the forthcoming summit to demand that North Korea abandon its entire nuclear program before economic sanctions are lifted.

READ MORE: Seoul Refutes Reports About Offer to US on Removal of Nukes From North Korea

While Seoul has favored a softer approach, built on confidence, suggesting that Pyongyang’s concessions lead to a gradual lifting of restrictions, Trump said he would not now turn to the position, which led to failure by his four predecessors.

© AP Photo / Andrew Harnik
South Korean, US Presidents Discuss Pyongyang’s Threat to Cancel Kim-Trump Summit
Bolton has repeatedly cited the so-called Libya model of de-nuclearization when the country turned over all of its nuclear-related equipment and received promises of economic integration with the West. Addressing Bolton’s suggestion, Trump said that if Kim agreed to denuclearize the Korean Peninsula, "he'll get protections that would be very strong."

The summit, set for June 12, was jeopardized when, on May 11, the US and South Korea kicked off a two-week annual air combat regional exercise, viewed by Pyongyang as a threat to its security.

Reacting to the drills, North Korea made a decision to call off ministerial-level talks with Seoul. The next day, Pyongyang said it might cancel the summit between Kim and Trump if Washington continues its hostile anti-Pyongyang policy. After the statement, the US diverted two B-52 bombers from flying over the peninsula, while South Korea and Japan agreed to refrain from any possible escalation.