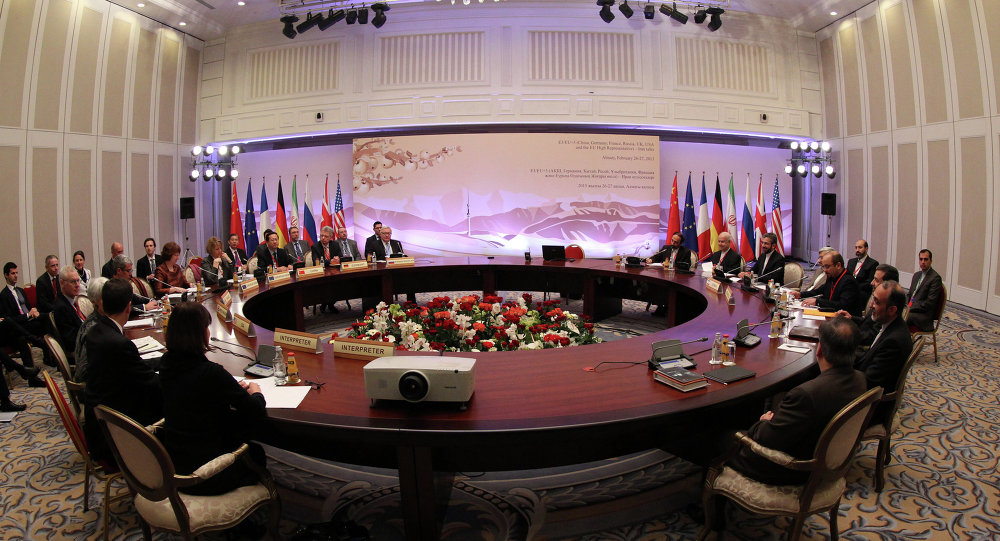 BEIJING (Sputnik) - Iranian authorities could "think about other options" if the US sanctions imposed after the withdrawal from the Joint Comprehensive Plan of Action (JCPOA) threaten the rights of the nation, the Iranian ambassador to China said in an interview with the South China Morning Post published on Monday.

"We expect other remaining members of the Joint Comprehensive Plan of Action, including China, to help implement and continue this deal, and fulfill their commitment and obligations according to this deal… If we could gain these rights and benefits from this deal we will stay in it. If these Iranian rights were not satisfied, and our interests were not reached, we will think about other options," Ali Asghar Khaji said without disclosing the details of these options.

The ambassador added, citing diplomatic efforts of other parties to the nuclear deal, that he believed in continuation of the nuclear deal by other states without Washington.

© REUTERS / Philippe Wojazer
EU States, Russia, China to Discuss New Iran Nuclear Deal, Leaving US Sidelined - Reports
On May 8, US President Donald Trump announced Washington would no longer be party to the 2015 agreement that allowed for the lifting of international sanctions on Iran in exchange for Tehran keeping its nuclear program peaceful. Trump also announced that he would re-impose US sanctions on Iran, urging other countries to follow suit.

However, other JCPOA parties, namely the European Union, China, Germany, France, Iran, Russia, and the United Kingdom criticized the decision of Washington and started taking steps to implement the deal.

During Sunday's talks between Iranian Foreign Minister Mohammad Javad Zarif and EU Commissioner for Energy and Climate Miguel Arias Canete, the European Union expressed readiness to preserve the accord and to assist European companies in maintaining their cooperation with Tehran.