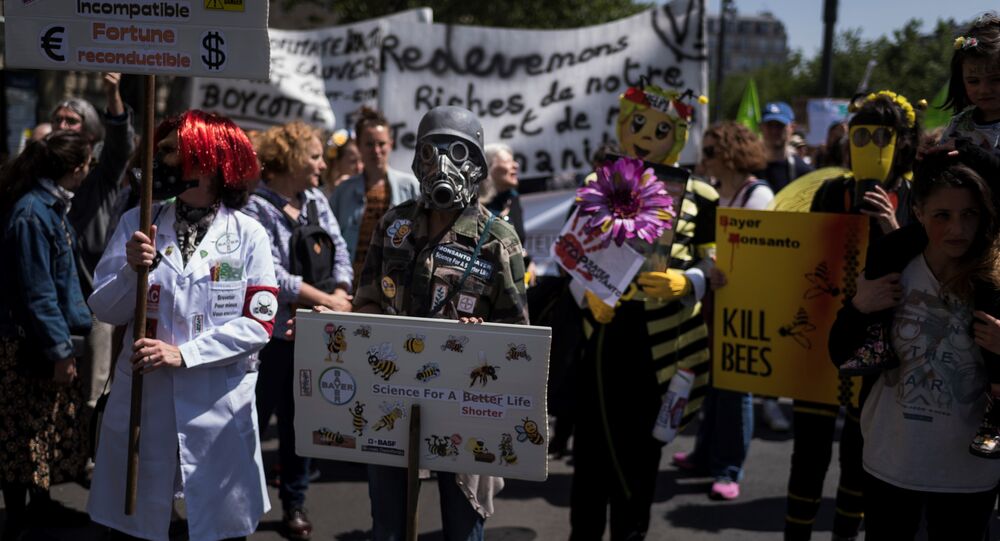 Rallies have swept the streets of Buenos Aires, Hamburg and Paris to denounce the corporate agrochemical giants Monsanto, Bayer and Syngenta.

Several hundred people marched on May 19 in France against GMOs, demanding a more ecological approach to agriculture, without pesticides.

About 2,000 people took to the streets against the chemical companies Monsanto, Bayer and BASF in Basel, Switzerland, where Syngenta, one of the world's largest pesticide producers, has its headquarters.

The participants protested against genetically modified seeds and monopolies in the agricultural sector. They criticized the use of toxic pesticides in southern countries, the expansion of genetic engineering and the practice of seed patents.

In late 2017, Bayer stated that it was expecting to close a deal to buy the US biotechnological company Monsanto in early 2018 and is continuing to work closely with authorities to be granted all the necessary permissions.

© AFP 2021 / Michael B. Thomas
EU Commission Says Approved Acquisition of Monsanto by Bayer, Subject to Conditions
In 2016, shareholders of the US agricultural corporation Monsanto approved a proposed $66 million merger with a subsidiary of the German-based chemical company Bayer.

The move sparked criticism among environmentalists and farmers across Europe.

After conducting an in-depth investigation, the European Commission agreed to the controversial takeover. The tie-up process, which is set to finish by the middle of June, will fundamentally change the global agrochemical industry.

The International Agency for Research on Cancer (IARC), published a report in the journal Lancet Oncology in 2015 with findings on three pesticides, including Monsanto's best-selling cash cow weedkiller Roundup which probably causes cancer.