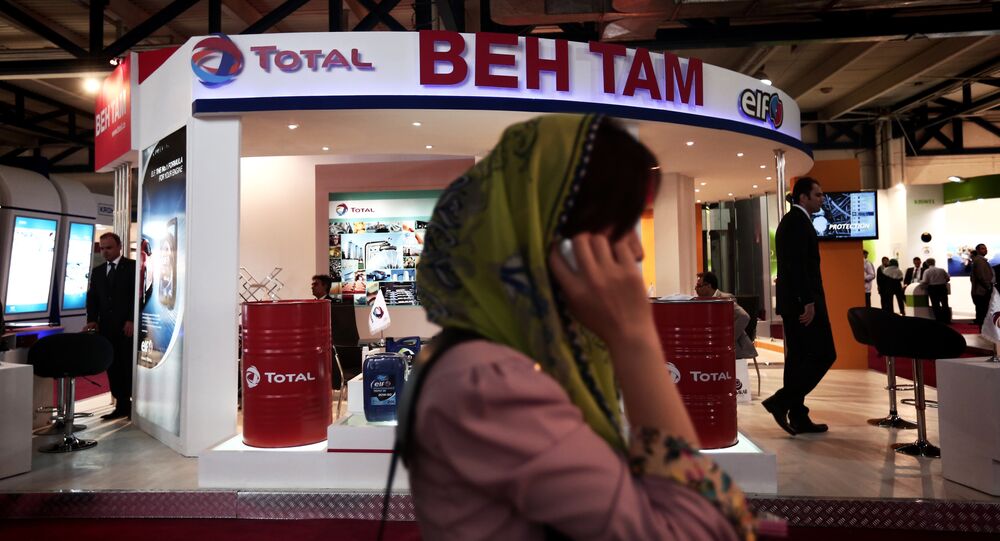 France, Britain and Germany are currently in talks with Tehran in a bid to try to salvage the Iran nuclear deal after Washington's withdrawal from the agreement earlier this month.

The French oil giant Total said in a statement that work on its  40-million-euro (47-million-dollar) gas project in Iran will be scrapped unless the company is exempt from the US' looming anti-Iranian sanctions.

"Total will not be in a position to continue the SP11 project and will have to unwind all related operations before November 4, 2018 unless Total is granted a specific project waiver by the US authorities with the support of the French and European authorities," the statement said.

READ MORE:  US Iran Deal Exit 'Chance for Europe to Once & For All Pursue Own Policy' – Prof

Total called for a waiver that would stipulate the company's protection from "any secondary sanction as per US legislation."

Total underscored it would be highly vulnerable to possible US sanctions given that the company has a whopping 10 billion dollars of capital employed in its US assets, while American banks are involved in 90 percent of Total's financing operations.

Brent crude oil price has, meanwhile, hit 80 dollars per barrel, its highest since November 2014, after Total's announcement, which also prompted US West Texas Intermediate crude futures to increase by 18 percent to 71.67 dollars per barrel, according to Reuters.

Earlier, EU foreign policy Chief Federica Mogherini said that the foreign ministers of Iran, Britain, France and Germany had agreed to task experts with protecting European business in Iran and that further talks on the matter are expected.

"We are working on finding a practical solution to keep the deal alive," Mogherini pointed out.

European Commissioner for Migration and Home Affairs Dimitris Avramopoulos, for his part, said that the EU is discussing "the possibility of applying our blocking statute" to protect the interests of European companies from the re-introduction of US anti-Iranian sanctions.

© REUTERS / John MacDougall
US Putting Serious Pressure on Iran Nuclear Deal Participants - Moscow
On May 8 President Donald Trump announced his decision to withdraw the US from the Iran nuclear deal, also pledging to reinstate the anti-Iranian sanctions that were lifted as a result of the agreement.