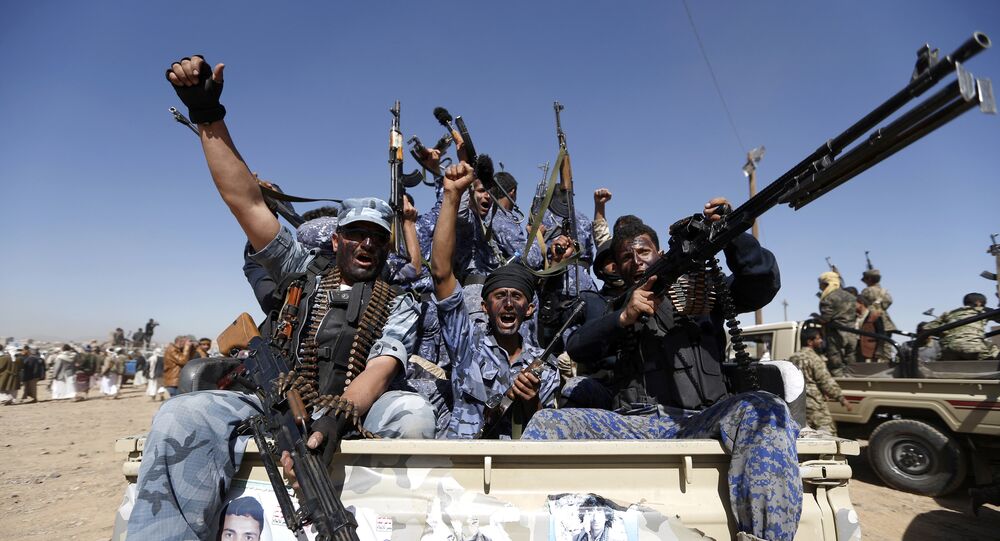 It has been unclear whether the missile attack on Riyadh has resulted in any casualties or damage.

According to Al-Arabiya TV channel, Saudi air defenses have intercepted Yemeni Shiite rebels' Houthi missile over the capital of Riyadh.

Prior to that, a series of blasts have been heard in the Saudi Kingdom's capital. So far, there has been no information whether the missile launch caused any casualties or damage.

Saudi Arabia has repeatedly come under attacks launched by the Houthis, who have been fighting the internationally recognized government of Yemeni President Hadi, with the latest taking place just two days ago. On May 7, two rockets were fired by the Houthis from Saada governorate and were successfully destroyed by the Saudi air defence forces just after they entered Saudi airspace

© Sputnik /
Saudi-Led Strikes on Yemen Presidential Office Kill 15, Injure 55 (PHOTO, VIDEO)
The situation has further escalated after the Saudi-led coalition reportedly attacked the Yemeni presidential office in Sanaa while head of Yemen's Supreme Political Council Mahdi Mashat, who also happens to be one of Houthi leaders, was still in the building. The Yemeni Shiite movement has vowed to respond to the strike that had claimed 15 lives and injured over 50 others.

Saudi Arabia and a coalition of mostly Gulf states have been involved in a military operation, which is aimed at restoring the government of Abdrabbuh Mansur Hadi, who was toppled in a series of uprisings in 2014 and 2015 by the Houthi rebels and fled to Riyadh, in Yemen since March 2015. The coalition has suffered a series of setbacks in recent months, with Houthis reportedly launching ballistic missiles and drones into Saudi Arabia and attacking coalition warships.