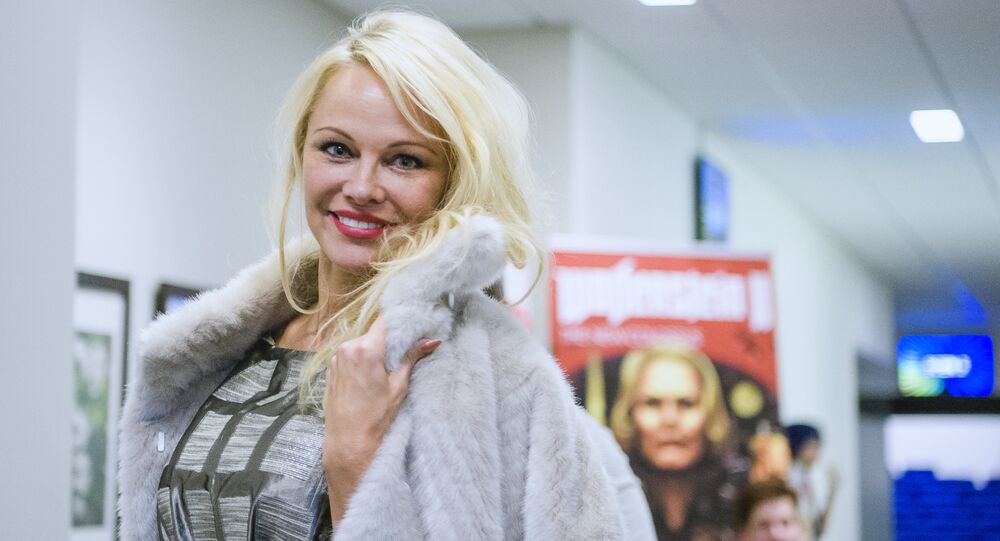 In a revealing interview with the Hollywood Reporter, the Baywatch star has spilled the beans over her relationship with one of the most renowned whistleblowers, WikiLeaks founder Julian Assange.

The Hollywood sex symbol, Pamela Anderson, did not attempt to hide the fact that she was extremely concerned for her friend, Julian Assange, saying that he is in “grave danger.”

Anonymous Scandinavia
‘They Threw Me Out:’ Activist Booted from White House Press Dinner for Supporting Assange
Assange still cannot walk out of the Ecuadorian embassy without being arrested and extradited to the United States where he’d be charged with espionage as he had unveiled thousands of US classified documents related to military operations, including in Iraq and Afghanistan.

Intelligence agencies have consistently accused Assange of having conspired with Russia after his pet-project hacked and shed light on Democratic emails from the private server of the Hillary Clinton campaign during the 2016 elections.

“He's been wrongly accused of so many things. I always try to humanize him because people think he's a robot or he's a computer screen or he's not this human being. He's so misunderstood, especially in Hollywood, and really hated, because of the Clinton monopoly on the media,” Anderson told the Hollywood Reporter.

The photo of Pam Anderson and Julian Assange was taken by David LaChappelle (yes, inside the Ecuadorian embassy). Our writer @TatianaSiegel27 met with Pam in Marseille, near where she lives now. https://t.co/JLTaxe5YxF pic.twitter.com/cMUu8TPtIt

According to the media outlet, Anderson is convinced that accusations against Assange are “bogus,” and claims that WikiLeaks is the only trustworthy source.

The model has also revealed that she used to visit Assange and talk to him before he was deprived of phone and internet access and banned from receiving any visitors.

The actress revealed that the Ecuadorian embassy staff did not let her in when she tried to visit him last month, and said that the conditions he’s living in left much to be desired.

“He’s cut off from everybody. The air and light quality [at the embassy] is terrible because he can't keep his windows open and he can't get any sunlight. Even prisoners can go outside, but he can't.”

People rushed to reach out to their phones and take to Twitter to express their views on the interview and the new revelations made by Anderson, with some approving of her words:

Good point, Pamela! The United States was on the brink of collapse due to this incredible corruption by Clintons, Obama, and many others in the Deep State.

Thank you Pamela. He's been demonized for telling the facts is what I've gotten out of his circumstances. I'm so sorry but glad that he has you.

Looking at the comments, she is right. These 'liberals' think they know it and are right about everything. Truth is, they are very ignorant and keep believing the lies the liberal media keeps feeding them. Bless them.

Meanwhile, others went on to criticize her stance and the world’s most wanted whistleblower:

Really now…I thought he was hated because he gave away only USA secrets and put American soldiers at risk.

“Clinton monopoly on the media”? Wow. You people are delusional and afraid of your own shadows.

No… Assange is hated because he helped to interfere in our free and democratic election process….our right guaranteed by the Constitution and secured by our citizenship. Assange is an enemy of the USA.

We saw his own messages, there is zero to understand — he acted directly against the interests of the United States. He is a criminal.

In March the founder of the whistleblowing website, who has been living at the Ecuadorian Embassy in London since 2012 for fear of being extradited to the US through Sweden where he would have faced rape charges, was cut off from the outside world by the government of Ecuador, which stated that the communications were suspended “due to Assange not complying with a written promise which he made with the government in late 2017, whereby he was obliged to not send messages which entailed interference in relations with other states.”

In February, a UK court refused to revoke the warrant for the WikiLeaks founder’s arrest over his breach of bail terms, even though Sweden, which launched the original investigation against him, dropped the case in May 2017.