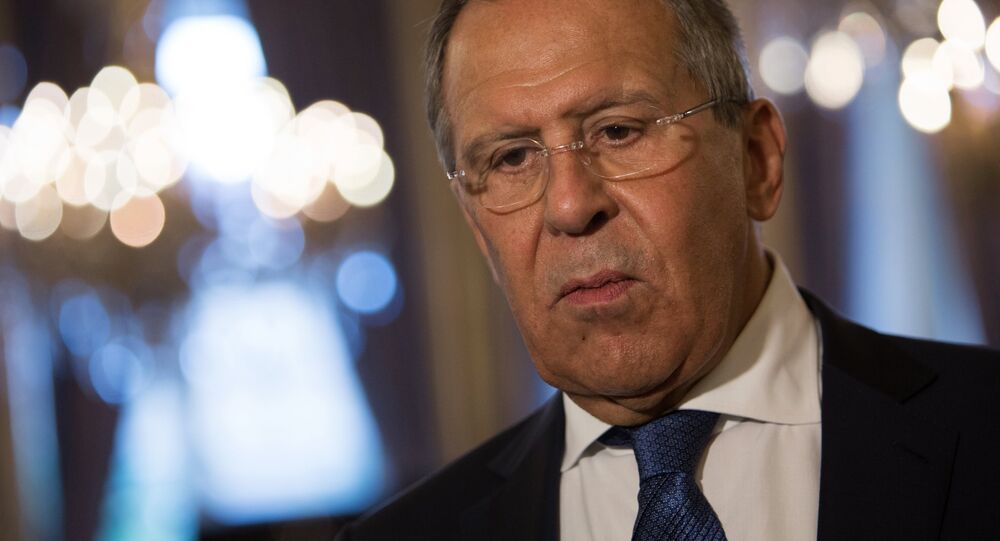 MOSCOW (Sputnik) – Russia shares US President Donald Trump’s intention of establishing normal Russia-US dialogue, but Moscow will judge whether the US’ interest is real based on practical steps, Russian Foreign Minister Sergei Lavrov has said.

“We have repeatedly stated that we positively assess President Donald Trump’s words on his desire to establish normal dialogue between our countries, Lavrov told the Panorama magazine in an interview, adding that “we will only judge the real interest of our partners in constructive … cooperation by their practical steps.”

According to Lavrov, relations continue deteriorating.

“Even if there is some positive input from the president, it is fully canceled out by the off-the-charts Russophobia in the US establishment where our country is portrayed as a threat,” Lavrov said.

The politician added that such situation had been caused by an "internal struggle" in Washington and had nothing to do with reality.

The minister recalled that Trump and Russian President Vladimir Putin had spoken by phone in March.

“[Trump] proposed to hold a high-level meeting very soon, he invited [Putin] to the White House, he spoke about his desire to establish coordinated efforts on the international arena, to jointly curb the arms race,” Lavrov added.

The Russian diplomat added that Moscow would like to have friendly ties with Washington but without sacrificing its national interests.

"While many people in Washington continue to 'plunge into' a self-replicating Russophobia, cooperation on important issues on the global agenda stalls. This has a negative impact on the situation in the world, where there are a lot of issues that cannot be settled without Russia-US cooperation," the minister added.

Lavrov expressed hope that common sense would prevail and representatives of the US establishment would be in the mood for cooperation with Russia.

On the Tense International Situation

Tensions in international relations are the result of some unilateral actions by the United States and its allies.

"Obviously, the situation in the world is getting more tense and less predictable. We have repeatedly noted that it resulted, first of all, from the continuous unilateral actions of the United States and some Western states 'loyal' to it," Lavrov said.

The minister noted that Russia was promoting a positive agenda, the prevention of chaos and confrontations and settlement of existing conflicts. He expressed confidence in the possibility of peaceful coexistence among all the international players.

"All of them [the states[ are very different, and they do not always behave in a sound and wise manner. But it is still possible to reach peaceful coexistence and sustainable development… Under any circumstances Russia will continue to work on the preservation and development of positive initiatives in world affairs," Lavrov said.

The minister stressed the importance of mutual respect, as well as observing the key principles reflected in the UN charter, including non-intervention in the domestic affairs of other states and respect for sovereignty.

As far as Ukraine is concerned, Lavrov said that the European Union and the North Atlantic Alliance (NATO), while pursuing their policy toward Russia's western neighbor, have been guided by anti-Russian sentiment and the desire for geopolitical gains, rather than by pro-Ukrainian considerations.

“In the West’s line on the [Ukrainian] issue, there is nothing [that could be regarded as] pro-Ukrainian, everything is anti-Russian. We see that, for the United States and a number of its satellites, talk of a common space of peace, security and stability in the Euro-Atlantic region were a guise, cover for the continued pursuit of the archaic seizure of geopolitical space and push of the fault lines to the East both through NATO enlargement and the EU Eastern Partnership program,” Lavrov said.

© AP Photo / Virginia Mayo
Forget Russia: NATO Officials Reportedly Think Bad Cafeteria Food Among Alliance's Big Problems
The minister recalled that Germany, Poland and France, despite being guarantors of the agreement between former Ukrainian President Viktor Yanukovich and the opposition, had soon given up on their obligations after the latter refused to honor the deal. NATO, which actively discouraged Yanukovich from using military force against protesters, currently does not prevent Kiev from using force in Donbass, Lavrov added.

Moscow expects the Organization for the Prohibition of Chemical Weapons Fact-Finding Mission (OPCW FFM), which has been tasked with investigating the April 7 alleged chemical incident in Syria’s Douma, to conduct an objective and impartial investigation.

“[We] expect their trips to Syria to result in an independent investigation, including visits to all locations linked to the alleged chemical attack and activities of extremists aimed at the production of toxic agents. For our part, we have done the utmost to facilitate the work of experts,” Lavrov said.

© REUTERS / Ali Hashisho
Experts Visit Second Site in Syria's Douma After Alleged Chemical Attack - OPCW
The OPCW FFM has been deployed to Damascus since April 14 and visited two sites in the area to collect evidence related to the reported chemical weapons attack, which Western countries have rushed to blame on the Syrian government without waiting for the probe's results.

Damascus and Moscow have refuted the allegations, saying that the attack in Douma was staged by militants and the White Helmets non-governmental organization to influence public opinion and justify possible foreign intervention.

Lavrov further noted that the United States was pursuing the goal of Syria's collapse and seeking to secure its military presence on the east bank of the Euphrates, with no intention of leaving.

"Though the US State Department and the White House have vowed that only goal [of the US] is to drive away terrorists from this country [Syria], in practice, the United States is actively settling down on the east bank of the Euphrates and effectively pursuing the course aimed at the collapse of Syria. Such a course is also being encouraged by certain US allies," Lavrov said.

He expressed regret over the fact that Russia has frequently faced the situation when statements made by Washington contradicted its real deeds.

According to Russia's top diplomat, the United Kingdom’s refusal to provide Russia consular access to former Russian spy Sergei Skripal and his daughter Yulia, poisoned in Salisbury, may be considered kidnapping.

© Sputnik / Alex McNaughton
Salisbury Safe for Residents, Visitors After Skripals' Poisoning - May
On March 4, former Russian intelligence officer Sergei Skripal and his daughter were found unconscious on a bench near a shopping mall in the UK town of Salisbury. UK authorities have blamed Russia for attempting to assassinate the Skripals with the A234 nerve agent.