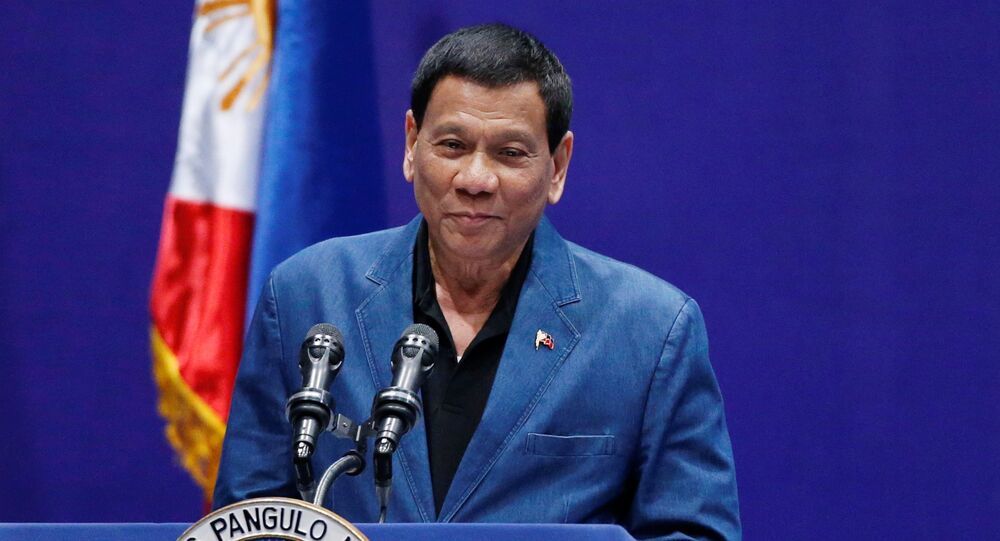 'I Hope He Considers Me Friend': Philippines' Duterte Calls Kim Jong-un His Idol

President of the Philippines Rodrigo Duterte called the DPRK's Supreme Leader Kim Jong-un his idol after the latter had met with South Korean President Moon Jae-in. Duterte stressed that their aspiration to cooperate led to the easing of tensions on the Korean Peninsula.

"You know what, he became my idol," the Philippines' president told reporters after returning to his country from a summit in Singapore, as quoted by The Rappler. Duterte pointed out that North Korea's leader was "the hero of the day."

Duterte welcomed the commitment of the DPRK to continue denuclearization and stressed that he hopes to meet with Kim Jong-un sometime to "congratulate him."

"I hope he considers me a friend," the president noted, adding that he is "impressed" with the North Korean leader.

Previously, the Philippines' Duterte warned that Kim Jong-un, who is "playing with his bombs, his toys," "just might go crazy one moment," as "his mind is not working well."

© REUTERS / Korea Summit Press Pool/Pool
North Korean Leader Promised Not to Use Force, Close Nuclear Test Site - Seoul
The change in rhetoric occurred after April 27, when the first summit in 10 years took place between the two Koreas. The meeting between North Korea's Kim Jong-un and South Korea's Moon Jae-in resulted in a joint declaration of their intention to push for the full denuclearization of the Korean peninsula, improve bilateral relations, as well as strive for common prosperity and the peaceful reunification of the two countries.

The historic summit came after Kim Jong-un vowed that North Korea's military would halt nuclear testing and join international efforts on denuclearization. Pyongyang's announcement came after months of rising tensions on the peninsula due to North Korea's nuclear activity.

Trump Invites Philippine President Duterte to Visit US in 2017