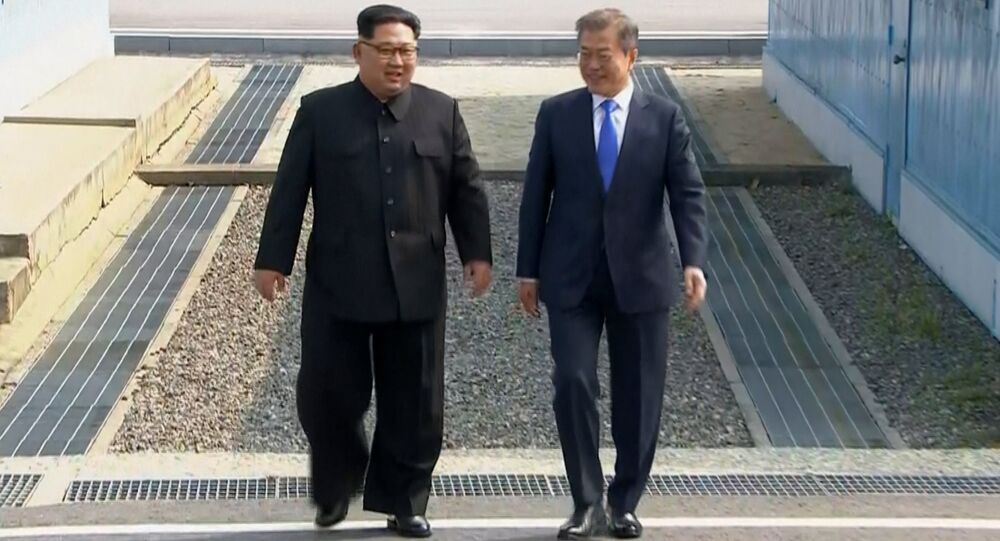 South Korean President Moon Jae In and North Korean leader Kim Jong Un are sitting down for a historic summit on Friday at the border truce village of Panmunjom.

Reports began trickling in an hour before the scheduled 9:30 a.m. local time meeting between the two leaders, detailing that their motorcades had departed for the Peace House on the southern side of the demilitarized zone that divides the two Koreas. This will mark the first time that Kim has crossed the North Korean border to meet with Moon.

Meeting up at the border, Kim and Moon smiled and greeted each other with a handshake. They later posed for photos on both sides of the border before walking off to join a parade.

​The topics expected to be discussed will include the denuclearization of the Korean Peninsula, routes establishing permanent peace and the advancement of inter-Korean relations.

According to Sky News, Kim and Moon will sit exactly 2.018 meters apart at an oval table to symbolize "the historic 2018 inter-Korean summit." Aside from snapping a few pictures, both leaders will also sign a guestbook and plant a tree together using soil from the North Korea and South Korea.

The United States lauded the inter-Korean talks saying it could offer a chance for peace and prosperity for the entire peninsula.

This meeting comes after the severe thaw in relations that took place on the Korean Peninsula leading up to the 2018 PyeongChang Winter Olympics, in which North Korea agreed to participate in the games and join its southern neighbor as a unified Korea.

The meeting between Kim and Moon comes ahead of another anticipated meeting set to take place between US President Donald Trump and Kim later this spring.

South Korea Hopes for Greater 'Pressure' on North After US Summit