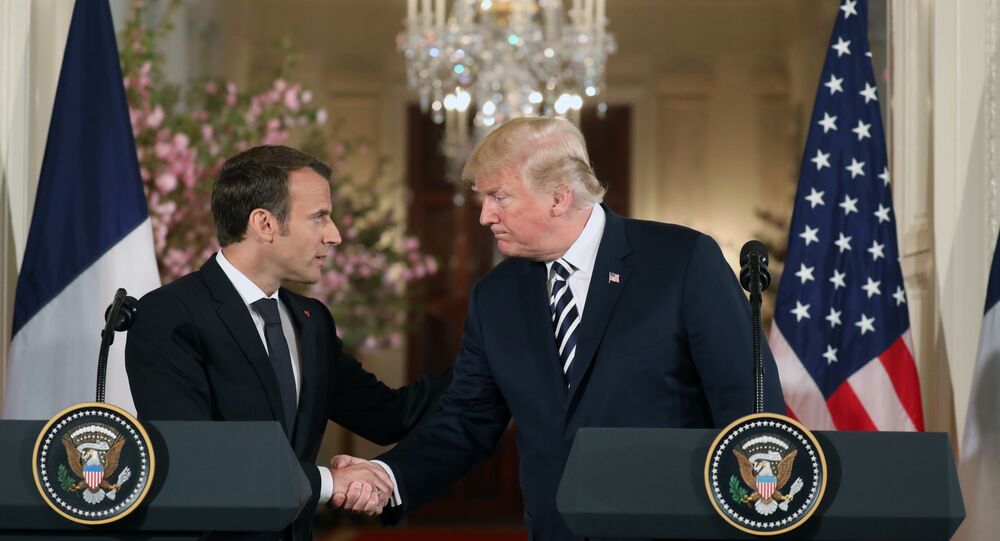 US President Donald Trump and French President Emmanuel Macron have delivered speeches at a joint press conference after a meeting in Washington DC, touching upon issues of Iran nuclear deal, the Syrian conflict, and the North Korean crisis.

In his opening remarks, US President Donald Trump touched upon the issue of the North Korean nuclear program, saying that Washington will continue its campaign of maximum pressure on Pyongyang. He went on to note that the US has made no concessions on North Korea and wants to see denuclearization.

Speaking on Iran Nuclear deal, also known as the Joint Comprehensive Plan of Action (JCPOA),  French President Emmanuel Macron said that Paris was ready to work with Washington to forge a new agreement with Tehran on nuprogram.

"I can say that we have had very frank discussions on that, just the two of us," Macron said at a joint press conference. "We, therefore, wish from now on to work on a new deal with Iran."

© Sputnik / Aleksey Nikolskyi
Iranian President Warns Trump: If Nuclear Deal Betrayed, There'll Be Severe Consequences
The French president has stressed that a new deal should restrict any nuclear activity in Iran till 2025, as well as put an end to Tehran's uranium activities and ballistic missile program.

Trump has backed the idea of a new agreement with Iran, saying it should be based on “solid” foundations.

The US president has consistently criticized the JCPOA — negotiated by the previous US President Barack Obama's administration — as being perhaps the worst deal in US history and threatened to withdraw the United States from the agreement if it was not amended.

On July 14, 2015, China, Germany, France, Russia, the United Kingdom and the United States — collectively referred to as the P5+1 group — signed the JCPOA with Iran. The accord stipulated a gradual lifting of anti-Iran sanctions in exchange for Tehran maintaining a peaceful nature of its nuclear program.

US President Donald Trump said in a joint press conference with French President Emmanuel Macron on Tuesday that wealthy countries in the Middle East need to step up their contributions to push back against Iran profiting from the US-led coalition's anti-Islamic State (outlawed in Russia) terrorist group.

"As we drive these ISIS [Daesh]* killers from Syria, it is essential that the responsible nations of the Middle East step up their own contributions to prevent Iran from profiting off the success of our anti-ISIS effort," Trump said.

Trump noted that there are some very rich countries are in the Middle East, adding "They have to step up tremendously, not a little bit, but tremendously, their financial effort."

Speaking about US military presence, President Trump said would like to pull out American contingent out of the Middle Eastern country "relatively soon," but added the troops have to fulfil their mission first.

"We want to come home. We'll be coming home. But we want to leave a strong and lasting footprint, and that was a very big part of our discussion," Trump said.

Speaking about the Syrian issue, Macron said that the diplomatic goal in the country is to ensure that the Syrians will live in peace. He added that he will assess in the coming months what has to be done in the country. At the same time, the French president said that it was impossible to say when Paris will end its operation in the Middle Eastern country.