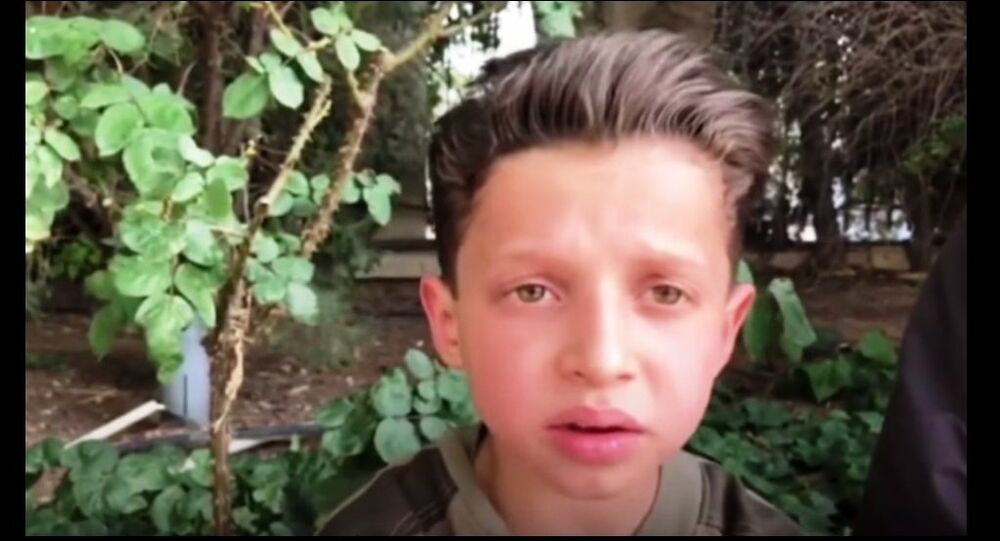 If it doesn't fit the narrative, there's no harm in shelving it. It appears that evidence proving the purported chemical weapons attack in Douma was staged has been largely disregarded by the mainstream newsmakers in the West.

The alleged attack and the subsequent airstrikes by the US, UK and France have been dominating the Western news agenda for several weeks now.

On April 7, several media outlets reported that the Syrian army had used chlorine in Douma, killing up to 70 people and injuring hundreds. Footage showing the aftermath of the "attack" appeared on social media, showing men and women shouting, rushing and hosing down adults and children inside a hospital building.

The video has been acquired and shown by most Western news media under the tagline "Children are treated after a suspected chemical attack in rebel-held Douma, Syria" or similar headlines.

Responding to the video and the allegations, the Syrian Defense Ministry said the claims were based on hearsay and testimonies by jihadist militants, and not backed up by hard facts. Russian Foreign Minister Sergei Lavrov said all proofs by the West were "based on media and social networks."

However, the footage and the "irrefutable evidence" reportedly in possession of French President Emmanuel Macron were evidence enough for the allies — US, UK and France — to conduct cruise missile strikes on a number of targets in Syria.

In his conversation with Russian President Vladimir Putin, Macron refused to reveal what that "irrefutable evidence" was. Nevertheless, the events around the alleged attack received detailed coverage by British, American and international media as essential developments of the situation in Eastern Ghouta.

Proof that the Douma hospital video was staged was presented to the international media on April 18, when the Russia 24 TV channel released an exclusive interview with the Syrian boy Hassan Diab, who was originally seen in the Douma video. Hassan said he was rushed to the hospital with his mother, and when they entered the hospital, unknown people grabbed and poured water on him, placing him with other patients after that.

Hassan's father also spoke about the incident, saying "there were no chemical weapons" and that the "militants gave them dates, cookies and rice for participating in this film."

Left Out of the Media Picture

The interview, however, went largely unnoticed by mainstream newsmakers. In the rare cases the interview with Hassan got a mention, it was referred to as line pushed by "Russian state media."

A precursor to the Sun's news headline "Russian TV claims Syria chemical attack boy, 11, filmed being doused with water was tricked into taking part in return for biscuits" was the phrase: "Fake Views."

A Times' headline attributes the fact that Hassan was paid off with food — to Russian TV, not the boy's father, who made the statement.

In comparison, the Times didn't attribute mentions of the alleged Douma attack to information presented by the White Helmets, a foreign-sponsored organization operating in Syria. Moreover, if some of the Times' headlines featured the phrase "gas attack" in quotations, the effort wears out, as seen in other titles.

Throughout the development of the Douma story, most news channels have made the effort of calling the reported event "an alleged attack" — and some still oblige. But as time passed, headlines omitting the crucial qualifier started popping up online and in television discussions.

© Sputnik / Mikhail Voskresenskiy
Syrian Doctor Reveals Why There Was No Chemical Attack in Douma
"Syrian medics 'subjected to extreme intimidation' after Douma attack" and "Syria attack: Chemical weapons inspectors retrieve samples from Douma" are just a couple of examples — with the latter actually referring to the fact that the Organization for the Prohibition of Chemical Weapons (OPCW) experts haven't yet established the use of chemical weapons.

The US broadcaster Fox News posted the alleged attack video online under the headline "Disturbing video: Children being treated after chemical attack in Syria" on April 9, which indicated certainty that the attack did happen and that chemical weapons had been used. However, a search for mentions of or statements by Hassan and his father on the Fox News website gives zero results.

CNN's coverage follows a similar scenario. Even though some of CNN's headlines on Douma stipulate that it was a "suspected" attack, others simply define it as a "chemical attack in Syria." There is no information on Hassan and his recollection of events that took place on April 9.

Searches on the New York Times, the Wall Street Journal and the Washington Post return no articles telling the story of Hassan and his father.

Very little coverage has been dedicated overall to Hassan's witness statement, in effect disproving the pretext for an international military attack.

© AP Photo / Peter Dejong
Russia Wants Syrian Boy From White Helmets' Footage to Address OPCW on Alleged Douma Chem Attack
As a consequence, international audiences were largely left out of the balanced discussion over a matter so imperative to the public. According to a recent poll, respondents in Britain mostly opposed a missile attack against Syrian military targets.

The principle of section five of the Ofcom Broadcasting Code, under which all media operate in Britain, is "to ensure that news, in whatever form, is reported with due accuracy and presented with due impartiality." Disregarding important developments around the Douma "attack" does not appear to be in compliance with not "favoring one side over another."

Hassan Diab may be brought to testify to the OPCW, Russia's Permanent Representative to OPCW, Alexander Shulgin, said in a recent interview.

"At a certain point, I told my Western colleagues: we, probably, will have to use another language, since you don't understand what we are saying. We will bring here, in The Hague, eyewitnesses who will personally tell you it was a choreographed provocation. I will do my best to have this boy speak here," Mr. Shulgin said.

He added, however, that "everything is possible" and Hassan might not be allowed to give a statement at the OPCW.