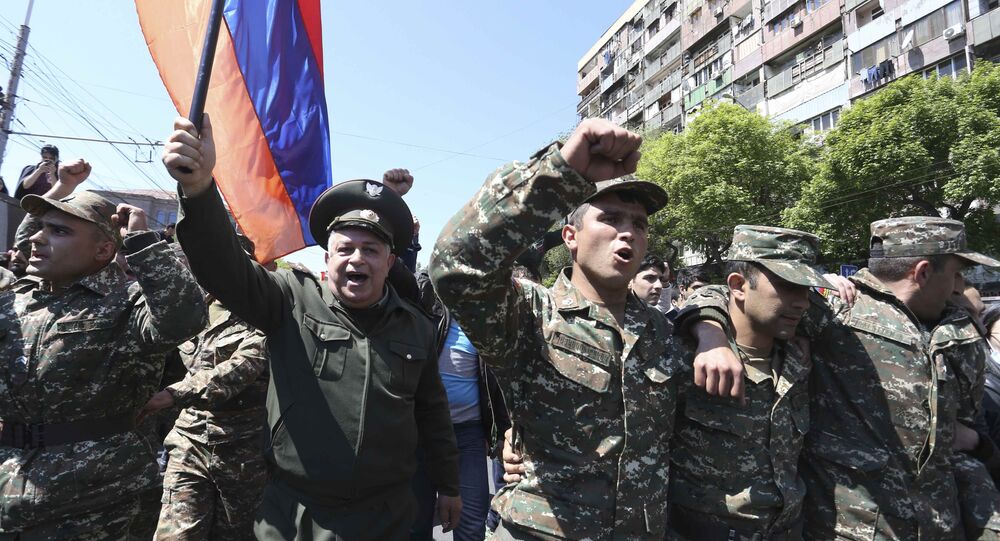 Earlier, photos emerged on social media showing people wearing military uniforms and joining the protests in the Armenian capital of Yerevan. This comes in the wake of reports that several groups of protesters marched along the streets of Yerevan on Monday.

The Armenian Defence Ministry vowed to take harsh legal measures against the soldiers taking part in the resumed protests in the country against the rule of Armenian ex-President and newly appointed Prime Minister Serzh Sargsyan.

"The actions of these servicemen are considered not only as a violation of military units’ regulations and refusal to perform their duties by deliberately leaving their units – a relevant appeal has been filed with the competent authorities – but also as a gross violation of the principle of the armed forces' non-interference in political processes. This should also be a cause for concern of international organizations," the ministry’s statement read.

Meanwhile, opposition leader Nikol Pashinyan who was detained on Sunday after failing to reach any deal in brief talks with Sargsyan has been released. Another opposition lawmaker, Ararat Mirzoyan, has also been freed.

"I demand to free all those detained. I will tell the rest at today's rally," Pashinyan told reporters on Monday.

The rallies in Armenia have been ongoing for 10 days so far. The people have been protesting in the wake of the ex-president's appointment as prime minister. After that, the opposition activists announced the start of the "velvet revolution" in the country.

Sargsyan, who served as Armenia's president from 2008 until recently, stepped down when his term ended. His subsequent nomination for the premiership has largely been viewed as an attempt to stay in power as a newly amended constitution transferred some of the presidential powers to the head of the government.

Move Over, Rapunzel! This Armenian Girl Can Pull a Two-Ton Car With Her Hair