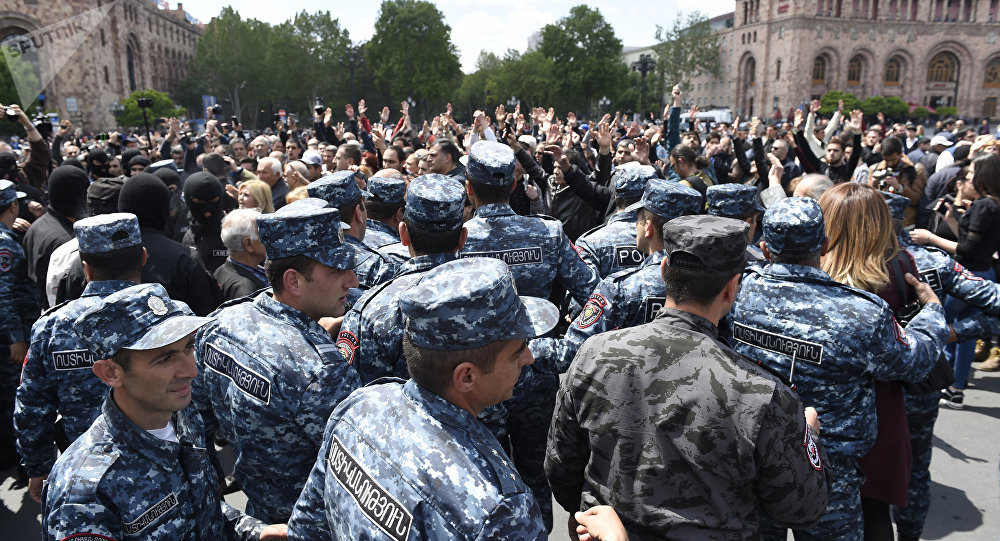 Law enforcement officers have detained 228 demonstrators in Yerevan, Armenia, which have recently seen a number of protests against former President Serzh Sargsyan, having been elected the country’s premier, according to the police press service.

Armenian President Armen Sarkissian stated that the situation in the country has approached the red line and called for moderation and a dialogue, especially ahead of April 24, the day that commemorates genocide victims in Armenia. A statement posted on the head of state’s website reads:

"The processes in our country have come to a dangerous point, which may lead to irreversible consequences. Unfortunately, despite the agreement reached a day earlier, the negotiations were suspended, although they could have eased up tensions."

On Sunday, police dispersed a new march by the opposition protesting against Serzh Sargsyan’s election as prime minister in the Yerevan district of Erebuni. Police reportedly made use of riot control weapons.

Sunday’s riots came after it became known that the negotiations between the opposition leader, Nikol Pashinyan, and the country’s premier, Serzh Sargsyan, had lasted for only three minutes and had led nowhere. Pashinyan and two other MPs – Ararat Mirzoyan and Sasun Mikaelyan – were later detained, alongside other protesters.

"A total of 228 have so far been brought to police offices," the police press service told Sputnik.

According to Sputnik’s on-the-scene correspondent, tens of thousands of people amassed on the Republic Square in downtown Yerevan voicing their dissatisfaction with Sargsyan’s election.

Rallies against the premiership of Serzh Sargsyan, who had previously headed the country, kicked off on April 13. In a new parliamentary republic, which Armenia was proclaimed on April 9, the prime minister virtually heads the country.

The opposition forces accused Sargsyan of inefficiently managing and deteriorating the economic situation and on April 17 declared the start of a "velvet revolution." Notwithstanding the protests, the Armenian parliament elected Sargsyan as head of the government.