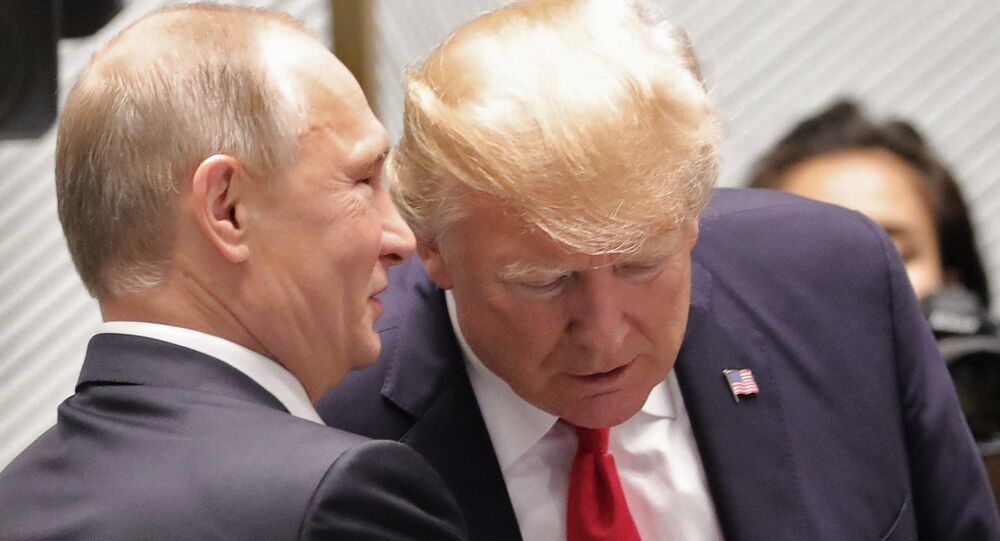 MOSCOW (Sputnik) – Russian President Vladimir Putin has never discussed the topic of Russian prostitutes with his US counterpart Donald Trump, as was suggested in the memos of ex-FBI Director James Comey, Kremlin spokesman Dmitry Peskov said on Friday.

"No. If it is written in a book, then at least this part does not correspond with reality. President Putin could not have said this, and did not say this to President Trump, especially given that they had not communicated before Trump became a president," Peskov told reporters, asked whether the Russian presidential administration had read Comey's memos regarding Trump, Putin and Russian prostitutes.

Earlier in the day, US media revealed extracts from Comey’s memos about his conversations with Trump, on which Comey based his new memoir. According to them, Trump recounted to Comey in February 2017 how Putin once told him that Russia had "some of the most beautiful hookers in the world."

In his memos, Comey did not mention when the conversation about Putin and Trump took place. The ex-FBI chief did note however that Trump had distanced himself from the allegations.

The memos were handed over to the US Congress earlier in the day at the request of three House committee chairmen, in a bid to shed light on the probe into the alleged ties between Russia and Trump's former campaign team.

© REUTERS / Carlos Barria
Comey's Book: 'It's Embarrassing Former FBI Director is Doing This' - Journo
The issue of Trump consorting with prostitutes in Moscow has become high-profile after the publication of the so-called Trump dossier in January 2017. The documents revealing compromising information about Trump, triggering an investigation in the United States into the alleged collusion between Trump's team and Russian officials. It was subsequently revealed that the campaign team of Trump’s election rival Hillary Clinton helped fund the dossier.

The United States has repeatedly accused Russia of interference in the 2016 presidential election and is investigating the alleged links between Trump team members and the Kremlin. Top Russian officials have refuted such allegations. Russian Foreign Minister Sergei Lavrov has stressed that the accusations of Russian meddling in the elections of foreign states were unsubstantiated.