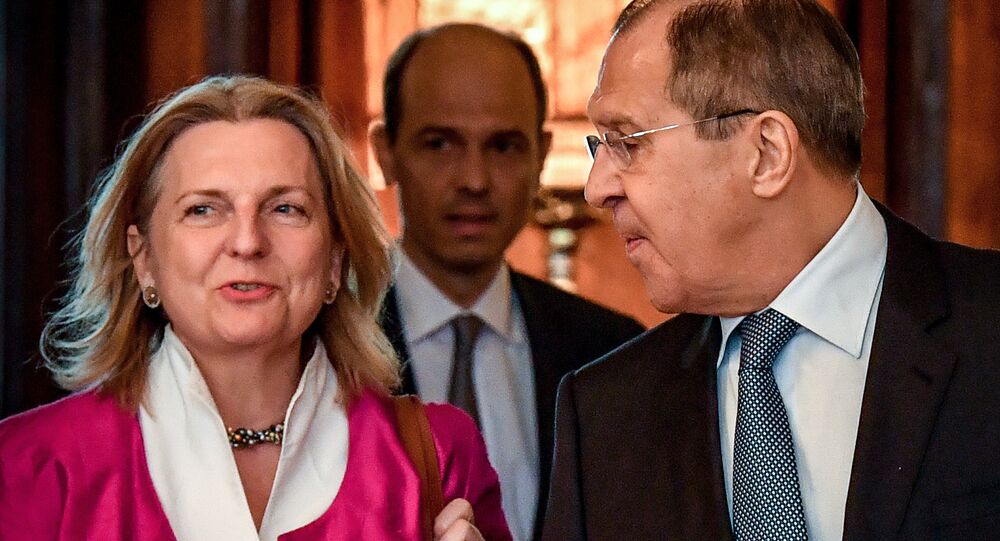 The top diplomats of Russia and Austria are due to discuss the resolution of the Syria crisis, the fight against international terrorism, as well as other topics on the international agenda.

Sergei Lavrov described Austria as an "honest broker," which "can help a lot" in settling the Syrian crisis. He rejected Washington's accusation of Moscow and Damascus allegedly hampering the access of OPCW experts to the the site of the alleged chemical attack in Syria's Douma:

"[As to] claims that the United States has evidence that Russia and Syria obstruct the access of OPCW inspectors to Douma — if they [the Americans] have it, let them show it," Lavrov said in a comment at a press conference following talks with Austrian Foreign Minister Karin Kneissl in Moscow.

According to the Russian minister, Moscow has presented its own evidence, collected on the basis of real facts, "with illustrations, with pictures, with interviews of concrete people."

"Meanwhile, from the [US] partners we only hear that they have evidence, be it the incident that allegedly occurred in Douma, or the incident in Salisbury," Lavrov stressed.

Lavrov compared Washington's warning that Ankara might fall under sanctions for acquiring S-400 air defense systems from Russia with "blackmail" and called on the US to take the opinions of other NATO member states into consideration in this issue.

Austria Not to Expel Russian Diplomats

Karin Kneissl underscored that Austria will continue refusing to expel Russian diplomats over Moscow's alleged involvement in the poisoning of former Russian spy Sergei Skripal and his daughter Yulia in the UK city of Salisbury.

Earlier this month, the Austrian minister pointed to the lack of evidence of Russia’s role in the Salisbury incident.

"Within the EU and at the ministerial level, we condemned the use of chemical toxins on our territory. The Austrian government decided not to expel Russian diplomats. Austria maintains its position. We believe that it is always necessary to keep the channels of communication open," Kneissl said.

She added Vienna's "foreign policy is based on facts."

'Let Him Have Fun': Lavrov on Johnson's Russia-Nazi Germany Comparison