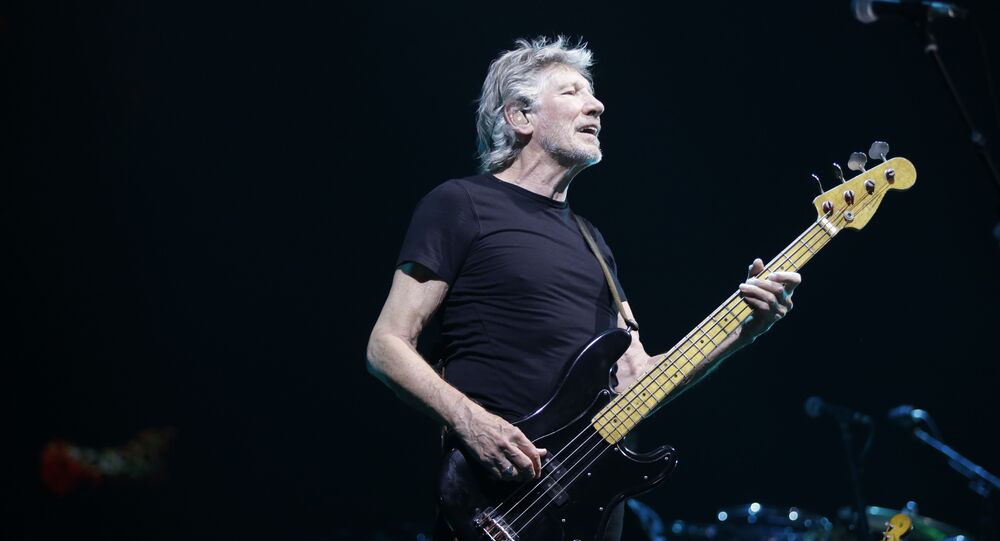 During his Barcelona concert on April 13, co-founder of the rock band Pink Floyd Roger Waters lashed out at the White Helmets as “a fake organization that exists only to create propaganda for jihadists and terrorists,” amid reports about an alleged chemical attack in Syria’s Douma.

Max Blumenthal, a journalist at the Grayzone Project, has shared exclusive emails provided by the ex-Pink Floyd frontman revealing that the infamous NGO in Syria, the White Helmets, had tried to “recruit” Waters by inviting him to a dinner arranged by a Saudi-British billionaire, Hani Farsi.

© AFP 2021 / AMER ALMOHIBANY
WATCH Syrian Boy in White Helmets FAKE Chemical Attack Video Reveals Truth
The first letter was sent in October 2016, with the addresser, Tanya Capper, encouraging Waters to join Farsi at a “fundraising dinner,” organized by The Syria Campaign, which had been working with the White Helmets, and enclosed a link to the trailer of the “incredibly powerful documentary” about the group’s daily rescue operations.

Waters received a second email from another activist, Pascal Hanrion, just a day before his concert in Barcelona, who claimed that he was a photo journalist linked to a “very powerfull [sic] syrian network.” Hanrion did not mention The Syria Campaign, but asked the rock legend to invite him on to the stage during the performance to “send a message to the children of Syria.”

The artist, however, did not respond to the emails.

Blumenthal proceeded to explain that over the past two years, The Syria Campaign has secured the support of numerous celebrities, such as George Clooney, Ben Affleck, Justin Timberlake and Coldplay, regarding the White Helmets’ work; Waters, in turn, told the journalist that he “would encourage” his colleagues to “stop supporting them [the White Helmets] because we know what they are.”

“I don’t blame them for having bought on it. On the face of it, it felt plausible that the White Helmets were just good people doing good things. But now we know they’re trying to encourage the West to drop bombs and missiles illegally in Syria,” he told Blumenthal.

Waters concluded that The Syria Campaign was “a malign organization funded by people who hope to gain from the ouster of Bashar Assad because once he’s gone, it will be open season for the stealing of the assets of a failed state.”

On April 13, a day prior to the US-led missile strikes on Syria in response to the alleged use of chemical weapons in Douma, Waters slammed the White Helmets’ propaganda:

“If we listen to the propaganda of the White Helmets and others, we would be encouraged to encourage our government to start dropping bombs on people in Syria. This would be a mistake of monumental proportions for us as human beings. What we should do is go and persuade our governments not to go and drop bombs on people. And certainly not until we have done all the research that is necessary so that we would have a clear idea of what is really going on, because we live in a world where propaganda seems to be more important than the reality of what is really going on,” Waters said during the concert.

The White Helmets have repeatedly been busted staging and filming false-flag chemical attacks: earlier this month, the group published footage featuring doctors in Douma hospitals treating patients that had suffered from the alleged chemical attack and blamed it on the Syrian government.

Reports of the purported use of chemical weapons in Eastern Ghouta emerged on April 7 in some media, citing militants on the ground, and were quickly picked up by several Western nations, including France, the US and the UK, which immediately accused President Bashar Assad of having dropped a chlorine bomb on civilians.

Damascus strongly denied the allegations, denouncing the attack as a staged provocation to justify potential foreign intervention. Immediately after the alleged incident, Moscow dispatched its chemical corps commission to inspect the site and determine whether there was an actual chemical attack; the expert group, however, found no traces of chemical agents in Ghouta.